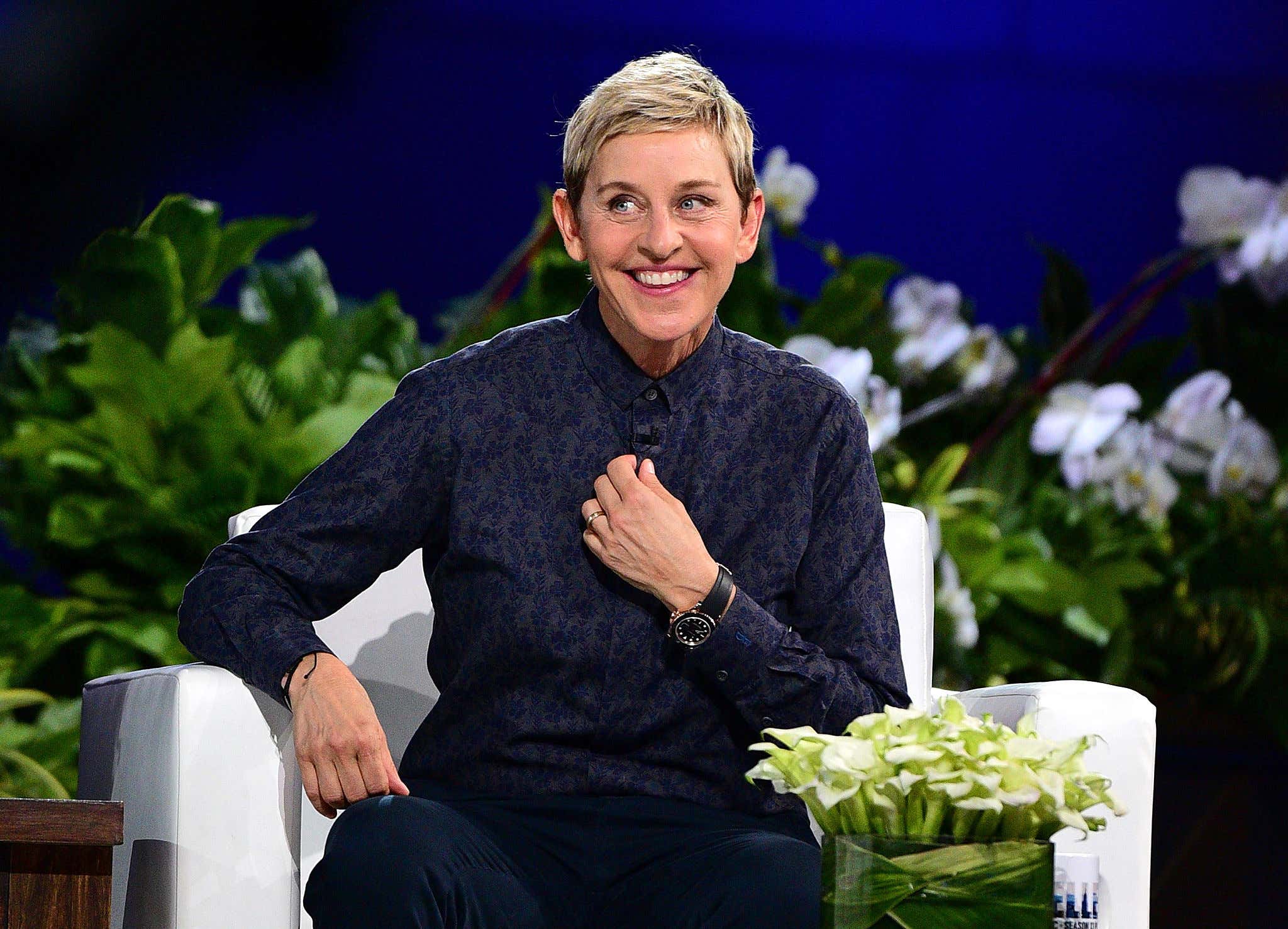 White Sox Dave is, by my estimation, one of the funniest people working at Barstool. The guy just has it. No Barstool employee has made me laugh harder during the three years of my involuntary sabbatical than WSD. The video of him chewing his gum to dust is something I'll watch in lieu of calling the suicide prevention hotline on the sticky note stuck to our fridge. And I can genuinely say that Dave gendering the handwriting of votes cast on Surviving Barstool is funnier than anything I've done in years:

Which is why I write this blog with heavy fingers. On a Saturday morning.

Yesterday, our hilarious White Sox Dave hurled another stone at the thoroughly-defaced, once-proud reputation of Ellen Degeneres. And I've got some… alternative thoughts I'd like to share. But let's start at the beginning.

Ellen has had a tough couple years. It started with twitter rumors that (gasp) she wasn't as nice as the Ellen we've come to know on our TV screens each early afternoon for 20 years. As the whispers became murmurs became shouts, it seemed that every neighbor, uncle, mother, and child had a horror story of Ellen's evil to share. Even her pussy-bitch bodyguard said his experience with her was "kind of demeaning." That a bodyguard can have his feelings hurt when his charge neglects to "say hi to me" is the skidmark on my mind's underpants I'll never be able to clean.

It was a bloodbath; a feeding frenzy. Sharks from all five oceans smelled blood in the water and came for their pound of Ellen's flesh. Sure, there were some legitimate corrections—accusations of a toxic workplace environment at Ellen were acknowledged and dealt with, which was certainly a good thing.

But as we so often do in this country, we decided we couldn't just redefine our understanding of Ellen as more brittle, less warm, more imperfect, or less sacred than the Ellen we thought she was. No—Ellen had, for too long, been lying to us through those smiles. All those gay children who found the courage to be themselves thanks to her example were simply pawns in her decades-long, sadistic chess game for publicity's sake. She had to go down, folks. And only the combined atomic power of every nuclear weapon on earth could effect a punishment commensurate with her terrorism.

And down she went. It didn't take long. On May 26, we hate-watched the final episode of Ellen and patted our backs for a job well done. The sanctuary of daytime television had been cleansed of a tyrant—a Lady Macbeth in sheep's clothing—and we were the heroic cleanup team. Sure, she'll have other ventures. But the lights to her largest platform were finally extinguished, and midday TV enthusiasts from Topeka to Burlington settled into their plastic-protected love seats and breathed a sigh of relief. No more poison, no more treachery. From here on, we can trust that the stable of Kelly Clarkson, Ryan Seacrest, Dr. Phil, Wendy Williams, Drew Barrymore, Rachel Ray, and the unimpeachable Maury will adhere to their divine calling with virtue and honesty.

With Ellen off the air, it's been some time since we've occasioned to revisit our fury towards her. The wounds had healed and we've pointed our scythes at the necks of fresh targets. But yesterday, out of nowhere and as though awakened from some frozen coma like Megatron, a hero named Greyson Chance screamed "WAIT, DON'T FORGET ABOUT ME!" while simultaneously saying "THIS IS THE LAST TIME I WANT TO TALK ABOUT THIS, UGH, STOP ASKING ME ALREADY."

I, however, saw a few plot holes. In fact, I read it late last night and had a hard time sleeping. So let me shed light on a few issues I have with Greyson and WSD's side of the coin.

“I couldn’t get ahold of her. Couldn’t talk to her,” says Chance, who returned to the show several times after 2012. “Whenever I would come on the show, it was such a fake smile. She wouldn’t even ask, ‘How are you doing? How are you holding up?’ It was just like, ‘Here’s what we’re going to talk about. We’ll see you on there.’ - Rolling Stone

Poor Greyson. Dropped like a bad habit with no way of reaching Ellen. Kicked to the curb and forgotten. Despite, you know, making several appearances on the show.

Am I high on fucking bath salts?

Can you imagine claiming that one of the biggest, most iconic stars in the world has cut you off completely, while also saying she continued to have you on her show, the #1 daytime television show in the country, in front of MILLIONS of viewers?

But oh, it wasn't the same! This time around, her smile was fake. Such a fake smile. She didn't even ask me how I was! Didn't ask how I was holding up! She just gave me notes, prepped me, and shoved me into this tiny box before parading me in front of her adoring audience.

That might be the most entitled, preposterous, awareness-lacking answer I've seen on the internet. Truly two statements that fundamentally cannot stand together.

Now, Dave kinda agreed with this, saying, "I don't hate Ellen for that. Not by a long shot. If she invested time and money into something and wasn't seeing a return that she deemed appropriate, it's her prerogative to cut bait, and that's what she did. All those publicists, agents, stylists, managers and whoever she set him up with? Yeah, those are gone. Fuck you Greyson! Make me my money or GTFO."

I mean, yes. I don't care if you're Ellen, Simon Cowell, Steve Harvey, Jimmy Fallon, or any other of 1,000 star-makers. If you provide an entire world of tools, shortcuts, connections, and advantages for a kid to hone and realize his/her potential, and that kid can't make the cut, what more can you say?

Maybe he hit puberty, his vocal range dropped a few octaves, and his tone went to shit. Or maybe we only liked him because he was a kid, and it didn't hit as well when he became an adult. Whatever it was dude, you were given a leg-up in showbiz that few, if any, have ever experienced. And it still didn't work out.

Speaking of statements that can't stand together, Dave went on to write these two sentences:

"There is NOTHING I hate more than people who are all friendly, happy go lucky, motivational in front of camera and complete twats behind it."

Lotta conviction in those words, Dave. You even capitalized NOTHING, leaving NO room for ANYTHING you hate more. Except… those two things aren't the same. They're close? They could mean the same thing? But the first is much more specific. If you had them as a Venn diagram, they might look like this: 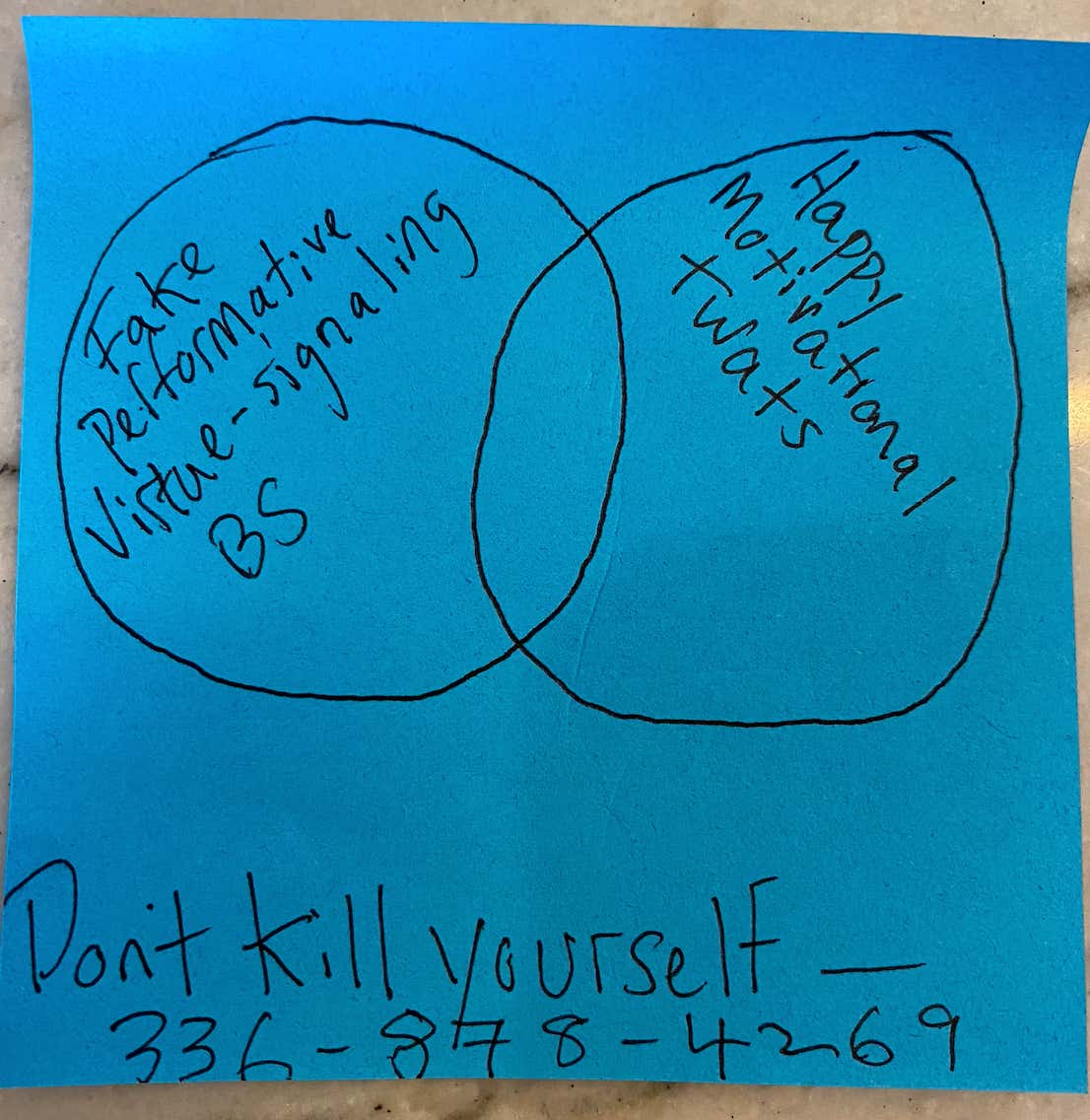 The intersection is large, certainly. But they're not the same. It's like saying the following two sentences in short order:

"There's NOTHING I hate more than butternut squash."

"There's NOTHING I hate more than acorn squash."

Sure, both acorn and butternut squash fall under the Cucurbita genus of herbaceous vegetables in the gourd family. They're both packed with fiber and make for a tasty complex carb, especially when roasted with a little cinnamon and/or maple syrup, if you're feeling naughty.

But by God, they are not the same. Not even fucking close.

I love Dave. I also have a soft spot for Ellen: her EP was kind to me at a time when I thought my career had ended. But above all of that, I just think this Greyson kid is making excuses for his lack of success. He's throwing logs on a funeral pyre that went cold months ago.

And until he can face his own, sub-par music and say wow, not great? He'll never move on.