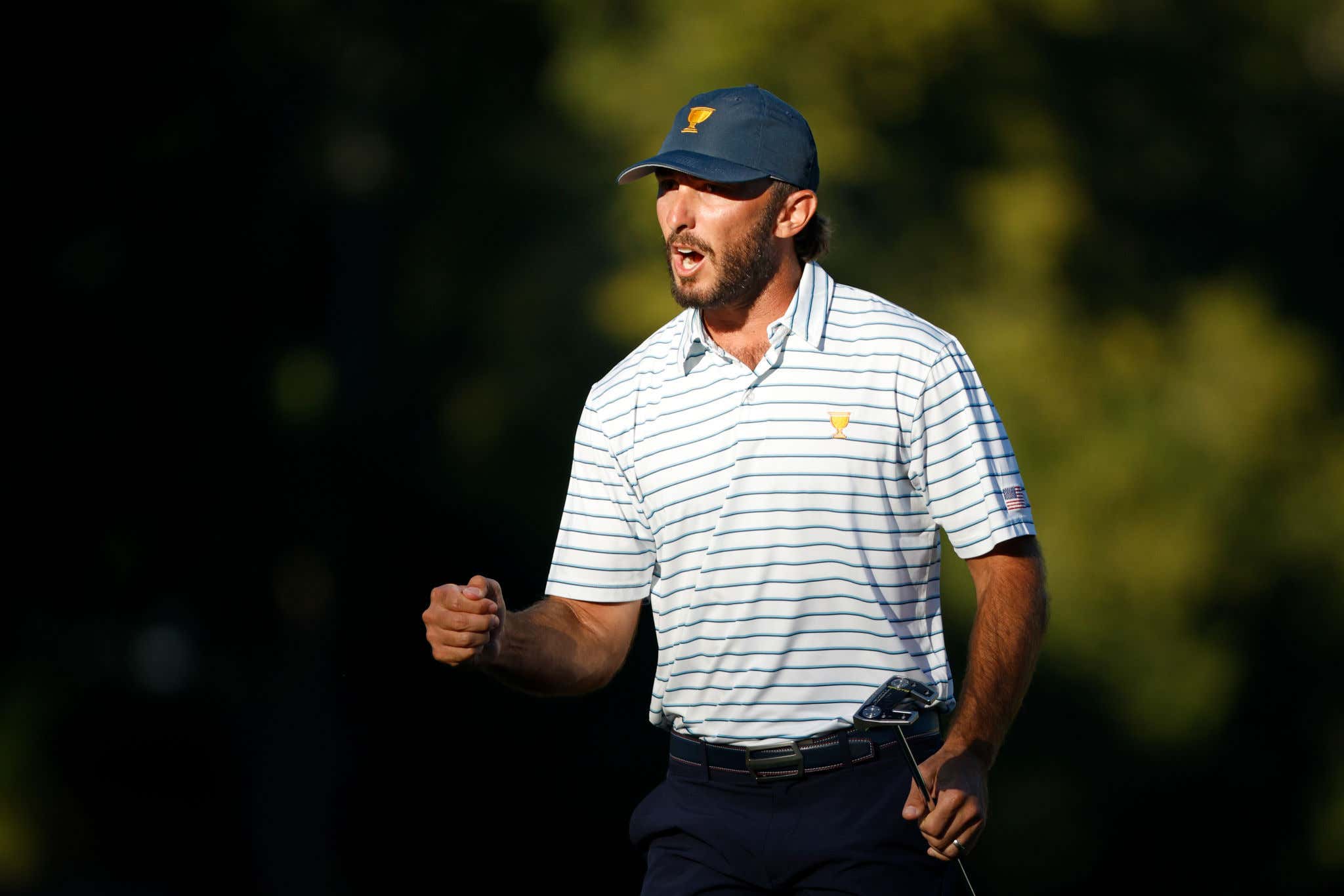 It brings me no joy to write this. But my allegiance is to the truth, and the Presidents Cup appears destined for a historic blowout. A second consecutive 4-1 session victory for the Americans, this time in fourball, means there is a legitimate chance Sunday's singles session is nothing more than a formality.

Which, of course, is crazy to say on Friday afternoon—especially when two-thirds of the 30 overall points are still up for grabs. But this United States side entered with a massive talent advantage, and the first two days at Quail Hollow have looked like a continuation of the beatdown this same core levied on the Europeans in last year's Ryder Cup. Granted, the Internationals are not close to mathematically eliminated. But neither was South Carolina when they trailed Georgia 24-0 at the half. The 'Dawgs wound up winning by 41, and the six-point margin here is far more likely to widen than to shrink.

For the second consecutive day, the U.S. flooded the leaderboards with red right from the jump. Jordan Spieth and Justin Thomas jumped out to an early advantage in the lead match over the Aussie duo of Cam Davis and Adam Scott, and the Americans led by at least 2-up from the fifth hole on. This was a classic case of ham-and-egg; JT birdied the holes that Spieth bungled and vice versa:

Spieth sealed the deal by hearting a slippery downhill putt on the 17th and let out a guttural 'FUCK YEAH' that snuck its way onto the live broadcast but was scrubbed from the social highlight. With the loss, Scott, who is playing in his 10th Presidents Cup, drops to 4-10-4 all-time in fourball.

The lone disappointment for the American side has been the duo of Scottie Scheffler and Sam Burns, who squandered a 3-up lead to lose their foursomes match Thursday and coughed up a 2-up advantage on the back nine Friday, eventually tying Sungjae Im and Sebastian Munoz. They didn't exactly blow this one, though—Munoz/Im birdied six holes in a row on the back nine, only for Scheffler to have a golden opportunity to steal a full point after sticking a 220-yard approach to 10 feet at the last. But he made a tentative stroke, and the putt limped toward the low lip before expiring just short.

The duo of Mito Pereira and Christiaan Bezuidenhout were the only International team to hold a lead on Friday, but Kevin Kisner and Cameron Young clawed back for a half-point—and it could've been a full one had Young's 20ish footer for birdie at the last been a bit higher.

One group further back was the wagon of Xander Schauffele and Patrick Cantlay, who led 5-up after eight holes to take all the oxygen out of a match against two of the Internationals' highest-ranked players, Hideki Matsuyama and Tom Kim. The two Californians backed up their 6&5 victory in the opening match of the Presidents Cup with a comfortable 3&2 W.

The final match of the session proved by far the most entertaining, and not just because of Billy Horschel's always-animated antics. He'd been dying to make a Ryder or Presidents Cup team, finally accomplished it at 35 years old and could hardly stomach the wait for his 12:35 tee time.

"I woke up this morning and felt like I had to throw up for three hours straight," Horschel said. "It was the most nervous I've been ever before any round of golf in my entire life. I think it's just the anticipation of wanting to be on these teams for so many years and missing out and finally making one. When I finally started warming up, that feeling finally went away. Yeah, it lived up to everything that I expected."

Horschel partnered with Max Homa against the up-for-it Canadian team of Corey Conners and Taylor Pendrith. Horschel needed to curl in a birdie at 16 keep the match level. After that, Max took the wheel—he poured in a birdie at 17 to go 1-up, then answered a birdie from Pendrith at the beefy 18th with a three-perfect-shot birdie of his own.

Prior to the week, Homa talked about his hesitance to let loose on the golf course. "I don't know if I'm the best energy on the golf course," he said I've been referred to as more boring in real life. I think of funny things. But, yeah, I don't know if I'll ever have the swag and the cool factor to run around on the green like Tiger and do fist bumps. I think about it and never do it and just wave." But team events are different, and this is his first, and he let it rip after clinching the final match of the day.

Homa was asked how the feeling on that 18th green compared to an individual win, like the one he had at last week's Fortinet Championship. "One-hundred times better," he said. "I am very close with my personal team; (caddie) Joe (Greiner), (coach) Mark (Blackburn), everybody. You feel like you have this little nucleus that relies on your good play. But this is different. You've got captains that have won majors. You have players who have won multiple majors. You have the best golfers on planet earth relying on you. And to show up and show out for them is just nothing like a regular golf tournament."

The U.S. now face the semi-tricky task of keeping their foot on the gas and avoiding any complacency. Per JT, the emotional leader of this side, they won't require any pump-up speech from captain Davis Love III.

"We just keep doing what we're doing," he said. "I think Davis has done an unbelievable job of—very, very similar to Strick at Whistling Straits last year. He understands he has 12 really, really good players, and he's taking information in that he needs and sees fit. But he fully understands and thinks that we are capable of playing well enough on the course. It's almost just kind of like a stay out of the way type thing. This is when you're playing, and just make sure you get to the tee on time kind of thing."

Translation: He knows we're a well-oiled machine, and he knows we smell blood.