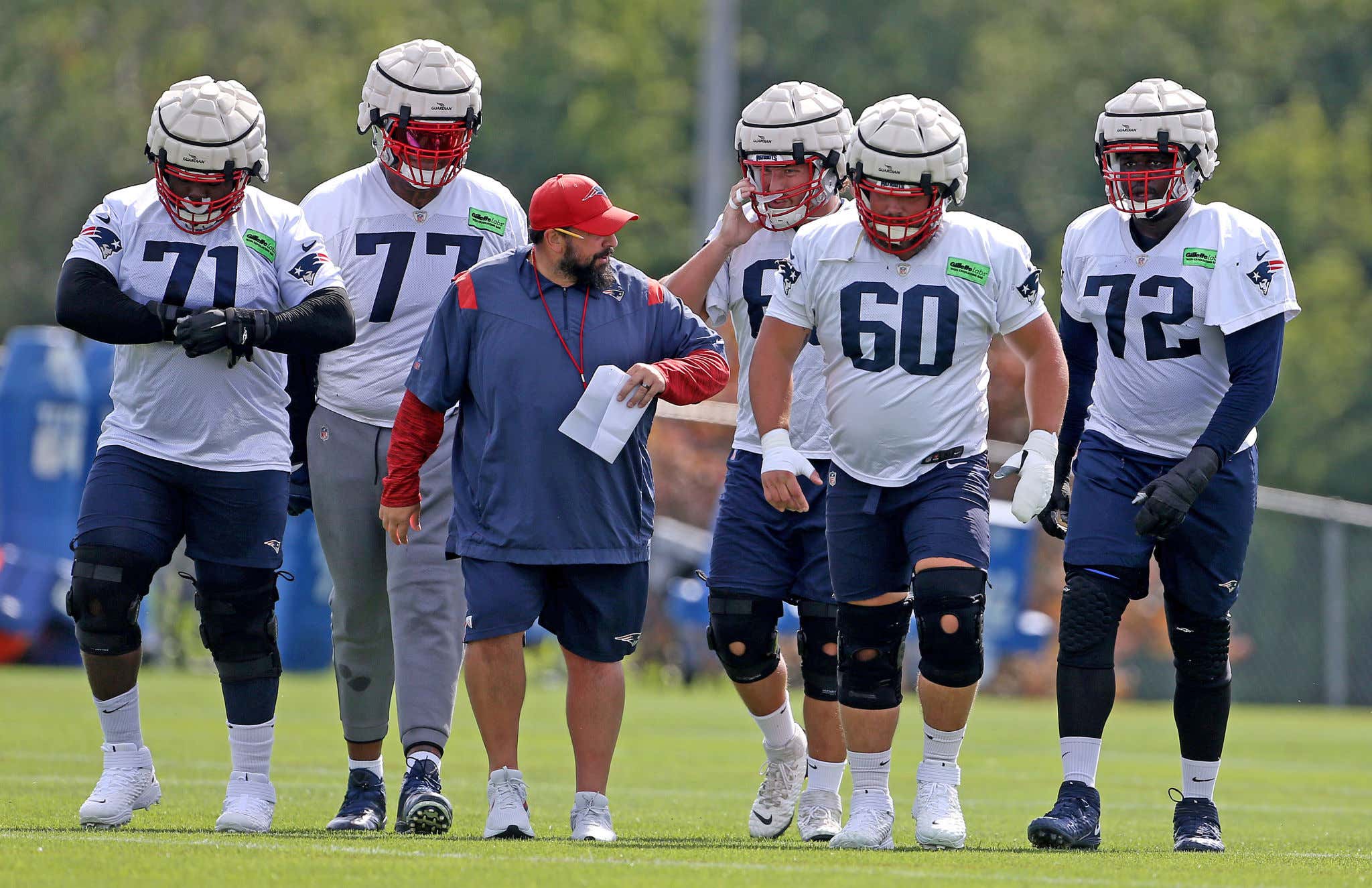 Two weeks into the NFL season is no time to be spiking a football. I get that. But the way I look at it, when there have only been two weeks and you're holding a football that is spikeable, why wait? Why not spike it now and avoid the rush? Besides, give it some time and perspective and maybe all the spikeability will have gone out of the ball, Ideal Gas Law-style.

What I'm getting to is the fact that in the Negativity Tsunami that hit Foxboro this offseason and threatened to wash Gillette Stadium out with the tide, most of it was directed toward Matt Patricia, De Facto Offensive Coordinator, and his impending doom. Less talked about, but by no means less negative, was the looming failure of Matt Patricia: Offensive Line Coach by Title, who was going to be just as much an abject failure in that role as in his larger one.

This is the third season since the Dante Scarnecchia retired from the position he held off and on since 1982. And it's still cold there in his mighty, profanity-laced shadow. According to the analytics elves who work in Cris Collinsworth's hollow stats tree at Pro Football Focus, last year the Patriots offensive line was graded 10th in pass blocking and 8th in run blocking. And that was WITH Shaq Mason (graded 4th overall among guards) and Ted Karras (23rd), now in Tampa and Cincy, respectively. So what chance did Patricia - who, in case you've not be made aware of this by now, has been a defensive coach all this time - possibly have of getting any sort of production out of the tattered remains of the unit he's inherited?

Those floodwaters of negativity only rose higher as camp went on. Much, much worse. The talk of August was that Patricia was coaching these guys into utter disaster. They were getting pushed around by their own front-7, getting bullied in joint practices, getting their lunch money stolen in preseason games. What was waiting for them in the regular season could only be a life of swirlies, tripped while carrying cafeteria trays, and getting pantsed in gym. To hear it from the experts, they were confused about their assignments. Except for Trent Brown, who seemed completely focused, on not playing hard and just collecting a paycheck. They couldn't open holes in the run game. And Mac Jones insurance premiums were about to go up because he was not long for this world.

Until, that is, the real tackle football began. And stop me if you've heard this before, the experts turned out to be wrong.

Technically, rookie Cole Strange is the weakest link on this line, but he was able to go toe-to-toe with Cameron Heyward in his second start and look capable while doing so. He gave up some pressure and a few more losses that never got to become pressure, but the fact the team believed in him enough to give him that assignment speaks volumes. The Patriots' offense isn’t playing well, but the line isn’t the source of the problem.

Let's begin by acknowledging the truth that overall, the offense is underperforming. I thought they'd get off to a slow start, and so far that disappointment has not disappointed. (What?) But the offensive line has been a strength. Even if you concede Cole Strange is the weakest link, that's a relative term. Like being the least attractive 23-year-old DiCaprio ever dated. By PFF's own metrics, he's the 35th highest graded guard in the league among, presumably, 64 starters. Shaq Mason is 32nd. And Strange's linemate on the other side of the ball Michael Onwenu, is fifth best as he continues to be one of the best value picks in GM Bill's career.

And for the "Weakest Link" talk, here are PFF's numbers for Strange so far:

I'm not arguing that makes him Logan Mankins. But again, if that's your Weakest Link, you're working with the kind of chain they use to anchor aircraft carriers. And considering that Strange was blocking guys from Furman and Mercer a year ago, that's a hell of a start to his pro career.

I feel compelled to offer caveats about how early it is and anything can change. But since I started out that way, forget it. Instead I'll just conclude by saying that, while apologies are not in order for Offensive Line Coach Patricia yet, they're coming soon. So to all the people who've been destroying him and this O-line, get ready to pucker up, asswipes.