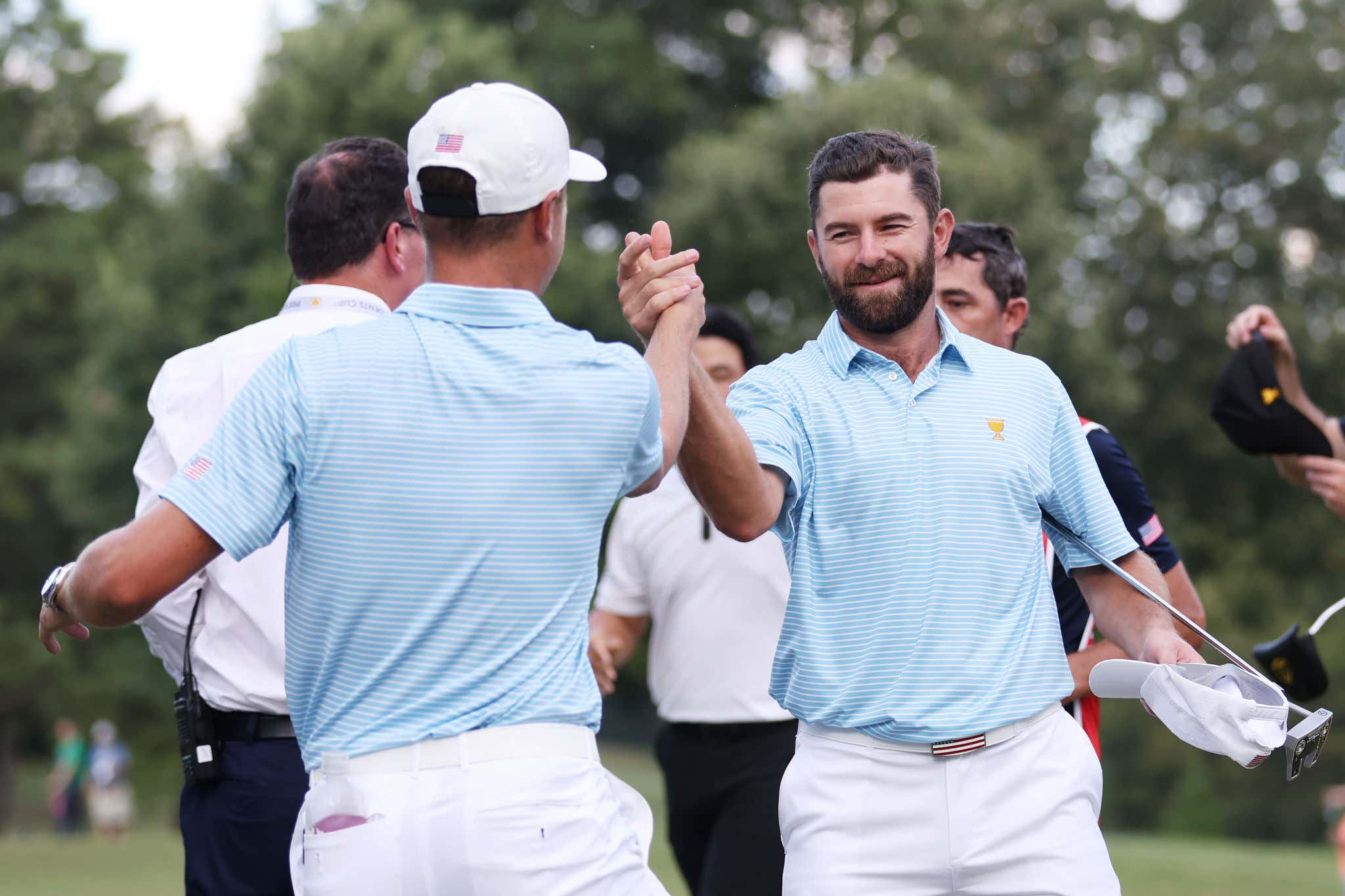 The Internationals faced a monumental task even before the first shot of this 14th Presidents Cup. The difference in resumes between their squad and the American one is more a gulf than a gap; the Internationals have six players ranked outside the top 50 while the Americans don't have one outside the top 25. Still, U.S. captain Davis Love III has repeatedly stressed to his team that golf matches are not played on paper.

Sure—but this opening round of foursomes played out almost exactly as expected.

The U.S. will take a commanding 4-1 lead in Friday's fourball, and concerns about the long term viability of this event will only grow louder if the remaining four sessions are as lopsided as this one. The Quail Hollow scoreboards were littered with red for the entirety of Thursday afternoon's alternate shot. At one point, the Americans led all five matches on the golf course, and Twitter jumped at the chance to eulogize this biennial competition—even with 25 of the 30 available points still up for grabs. A sample of takes: The Internationals can't compete without the LIV guys. This event needs to be mixed and include women. This'll be decided before Sunday singles.

The duo of Patrick Cantlay and Xander Schauffele set the tone early and are proving to be quite the alternate-shot wagon. They're best pals, they won both their foursomes matches at last year's Ryder Cup and they absolutely punked Adam Scott and Hideki Matsuyama on Thursday. Scott and Matsuyama made sloppy mistakes and bogeyed their final three holes while Schaufflay (a trademark of Daniel Rapaport) did not make a bogey over 13 holes on a blustery afternoon. It added up to a 6&5 victory, the most lopsided foursomes match since Adam Scott and K.J. Choi pumped Tiger Woods and Steve Stricker by that same margin in 2011.

"We just told each other to try and ball strike the heck out of this place," Schauffele said, "and that's what we did."

Cantlay concurred: "We definitely love these events and love playing with each other. We've played a lot of alternate shot with each other, and I think we just feel really comfortable and confident. On a day like today to make no bogeys, it was really good golf."

Indeed it was. In the group behind, Justin Thomas was able to overcome erratic driving from Jordan Spieth and some curious shots of his own, including a flat-out shank from a greenside bunker. The entire match was far from aesthetically pleasing, but the two Class of 2011ers edged Sungjae Im and Corey Conners 2&1. With the win, Spieth becomes the first player to win his first six foursomes matches at the Presidents Cup.

"It was a big grind," Thomas said. "I mean, you know, we played a really, really good team, a team that hits a lot of fairways, a lot of quality shots. I hit some unbelievably questionable shots, and I think that's why we make such a great team. We can salvage when we don't have our best stuff on a day like today."

Collin Morikawa and Cameron Young, a match made in alternate-shot heaven, went out third for the Americans. Morikawa's a generationally good iron player, and Young finished third in driving distance and second in strokes gained off the tee. It's a similar formula to the one captain Steve Stricker followed at Whistling Straits, where he paired the hyper-accurate Morikawa with the power of Dustin Johnson to devastating effects. Johnson's not here, and you know the reason why, but Young filled the hits-it-a-mile-and-hardly-ever-smiles role quite well. Morikawa, who has struggled recently to produce the gentle fade that brought him two majors before his 25th birthday, was back to his pinpoint best, frequently giving Young birdie looks that he could not convert…until the 17th hole, when he canned a 25-footer to clinch a 2&1 victory over K.H. Lee and 20-year-old Tom Kim.

"To be honest, I don't think they really missed a shot," Morikawa said of the Korean duo. They may have hit one poor tee shot. I think K.H. was hitting every single fairway. Tom was hitting great iron shots. Smart, smart iron shots you need to do in alternate shot. So we had to play some pretty good golf."

World No. 66 Cameron Davis and No. 76 Si Woo Kim did their best to manufacture some momentum for the Internationals by flipping a 3-down deficit to beat No. 1 Scottie Scheffler and No. 12 Sam Burns, who badly pulled his tee shot on 18 to essentially guarantee the Internationals' first point.

"They've been the ones in form all year," Davis said. "We've been kind of creeping around in the background a little bit. Yeah, very satisfying, head to head, to have the game that takes that on and gets on top. So very proud. Yeah, some good vibes the rest of the week.

Trevor Immelman's side had a serious opportunity to add another half or full point from the last match, which pitted Mito Pereira and Taylor Pendrith against the U.S.' Max Homa and Tony Finau. They were all square heading to the 18th tee only for Pereira to snap-hook his tee shot into the left rough. Pendrith did well to advance his second into a greenside bunker, but Pereira played a nervy bunker shot that left Pendrith longer than he'd like for par. Homa, on the contrary, split the fairway, and Finau played his second into the fat part of the green. An American par ensured a 4-1 advantage after Pendrith hammered his par effort past the hole.

Immelman, a relentless optimist even after a most turbulent captaincy, will say all the right things in his team room—that his squad of seemingly overmatched players, who were outplayed on Thursday, can flip the script. There is some evidence to support that assertion. More than 80 percent of the points are still to be spoken for, and the Internationals held a 4-1 advantage at the 2019 Presidents Cup and lost. But context is crucial, and it's not doing the Internationals any favors.