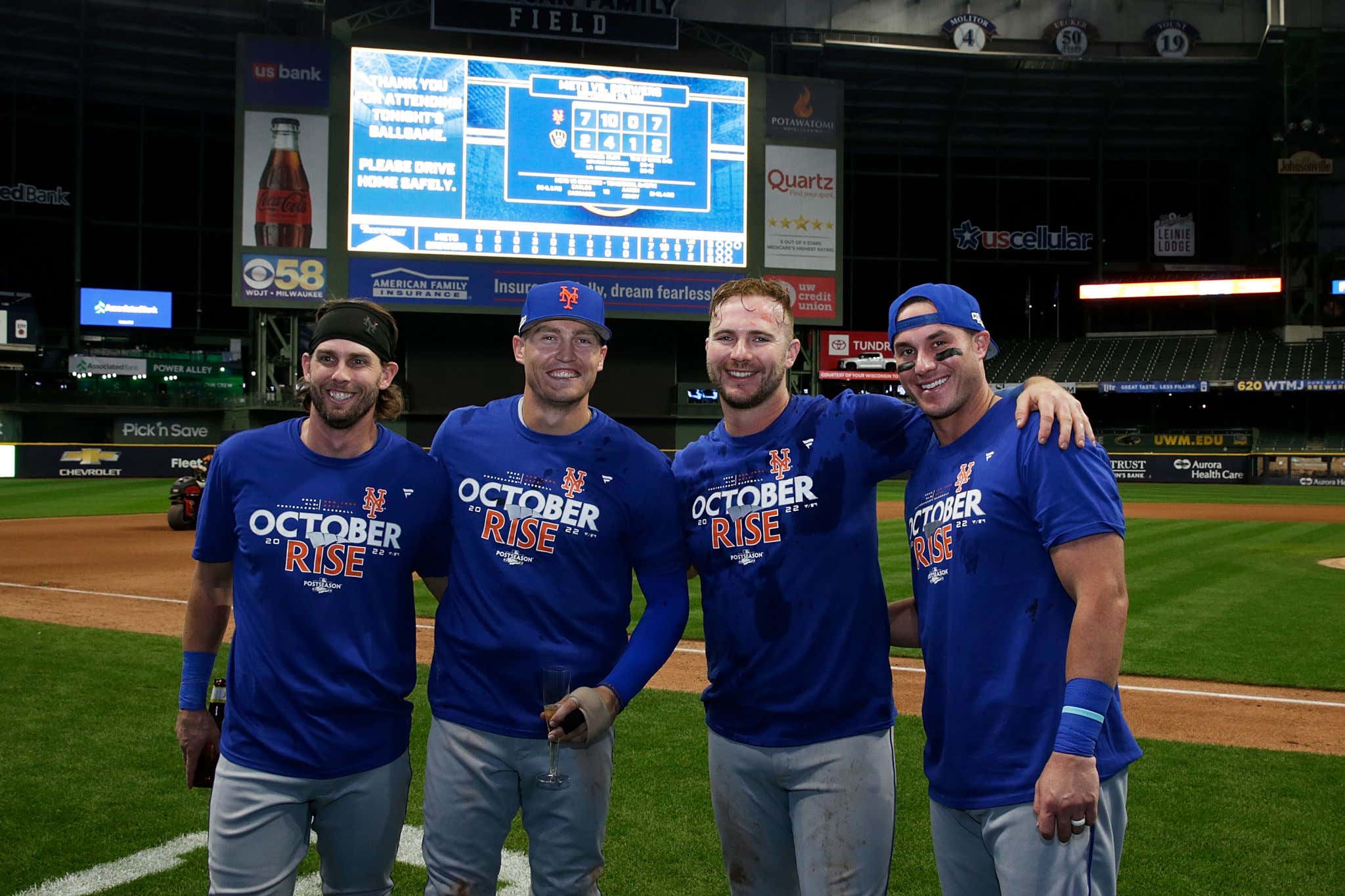 The New York Mets are in the playoffs, but nothing is clinched. You win the division and settle for the Wild Card. They did what they needed to do, winning the series against the Brewers in Milwaukee. The Mets had a masterful pitching performance by Max Scherzer in his return from the injured list. They also had a roaring comeback as they overcame the post-celebration hangover. The Mets fell flat in the finale, but with the Braves losing at the same time maintained their one-game lead while allowing the Brewers to put heat on the Phillies, who now face the Braves with their season at stake.

The Mets into Milwaukee, needing one win to assure their first playoff appearance since 2016. In the opener, they had Max Scherzer on the mound after missing two weeks with soreness in his side. The time off was the recipe for success for Scherzer, as he had his best start of the season. Max Scherzer had a legitimate chance to pitch a perfect game had he not been on a pitch count. He retired all 18 batters he faced, striking out nine.

When Scherzer left the game, the Mets had a 5-0 lead, as Pete Alonso hit a three-run bomb in the third. The Mets added two runs in the sixth on a triple by Francisco Lindor and a double by Daniel Vogelbach. Tylor Megill, also returning from the injured list, pitched the seventh inning and gave up a two-run homer to Rowdy Tellez. However, the Mets added two runs in the eighth and won the game 7-2 to clinch a playoff spot, as Seth Lugo and Adam Ottavino handled the final two innings.

The Mets handled the playoff-clinching with perfection. They had a small champagne toast and posed for a picture to sell some postseason merchandise. They had a sense of accomplishment, knowing there was more ahead, as they only completed one step on the way to the ultimate goal.

The Mets had Carlos Carrasco on the mound in Game 2 as they hoped not to have a post-clinch hangover. Carrasco did not help the Mets' cause as he was the stale Danish Tin cookies, allowing three runs on five hits in four innings. The Brewers added a fourth run in the fifth, as the Mets were falling flat against the Brewers, who were running a bullpen game.

The Mets' rally started in the sixth inning when Brad Boxberger hit Mark Canha with a pitch. Francisco Lindor followed with a single, as Pete Alonso put them back in the game with a three-bomb to center field. With the new life, Joely Rodriguez pitched a brilliant inning setting the stage for the Mets to take the lead. Taylor Rodgers relieved Boxberger and walked the first three batters he faced, Darin Ruf, James McCann, and Brandon Nimmo. After Canha struck out, Rodgers tried to slip a fastball by Francisco Lindor, who smashed a grand slam to give the Mets the lead.

Trevor May and Adam Ottavino had their struggles as the Brewers got a run back in the eighth. However, Edwin Diaz came in for a four-out save and gave one of his most dominant efforts of the season, striking out three of the four batters he faced for his 31st save as the Mets won the game 7-5.

Looking for the sweep, the Mets had Taijuan Walker on the mound as the Brewers mixed and matched out of the bullpen again. The Mets suffered an early loss, as Brandon Nimmo left the game in the first inning with tightness in his quad. The Mets got just four hits for the second straight game. Walker shut down the Brewers for the first five innings but allowed a home run to Willy Adames in the sixth after Steve Gelbs won the Sausage Race in a Polish Sausage costume.

Taijuan Walker pitched well but ran out of gas, allowing a second run in the seventh and leaving with two runners on base in the seventh. David Peterson retired two batters before a walk loaded the bases. Buck Showalter called up Drew Smith to keep the game close, but in his first appearance in two months, Smith gave up a grand slam to Mike Brosseau that put the game out of reach 6-0, as the Mets were shutout for the eighth time in 2022. With the Braves losing, the loss was just a bump in the road as they maintained their one-game lead in the East.