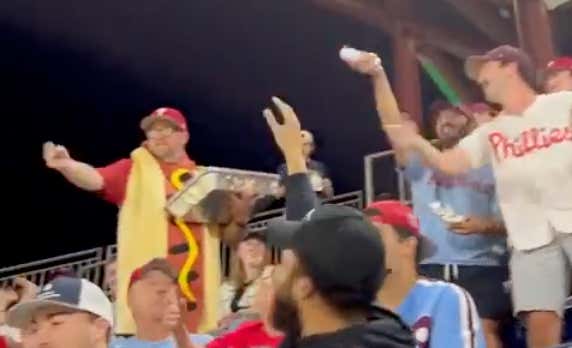 The Phillies picked a brutal time to start sucking. Right as you'd hope this team could gear up for that final playoff push, they dropped 5 games in a row and are now clinging on to that 3rd wild card spot. This is exactly why it's been so difficult for fans to buy into this team. Just when you start to care, just when you start to have a little faith, they unload a vicious bowel movement directly into their own pants.

Clearly something needed to change. It was becoming increasingly obvious that somebody needed to step up and say enough is enough. Make a play. Be a hero. Get that momentum going in the right direction again.

And that's exactly what Phillies fans did last night at Dollar Dog Night--a dollar dog night which wasn't even supposed to happen were it not for the heroic efforts of the fans clamoring for more discounted glizzies.

The Phillies originally only had 2 dollar dog nights on the schedule. That's when our good pal Kyle over here dialed up the pressure and essentially bullied the Phils into adding another DDN before the season wrapped up. Now it would be easy for anybody to show up to Dollar Dog Night just thinking about themselves. Just attempting to see how many glizzies they can put down themselves to set a personal record. But Philly is the City of Brotherly Love. And what better way to demonstrate that love for your fellow Philadelphian than by purchasing a box of dogs at wholesale and then passing them around to hungry fans all across Citizens Bank Park?

That's right. Not all heroes wear capes. Some dress up in their finest hot dog costume and get the 400 section rocking on a Wednesday night.

It's as clear as the day is long that if the Phillies want a raucous crowd in the Bank for a Red October, they need to have every night be Dollar Dog Night. Just look at the energy here. It's palpable.

Unfortunately there were a few casualties along the way…

But all in all, you have to consider this a highly successful night. Especially when the crowd was able to will this team to victory after finding themselves in a 3-0 hole.

The Fightins are now 2-1 in Dollar Dog Night games this season. All I'm saying is you can win a playoff series with those numbers. Trust The Glizzies. Do the right thing, the Phillies.

Get geared up for this Red October run. Promo code JORDIE for 10% off at checkout, because I love you all.