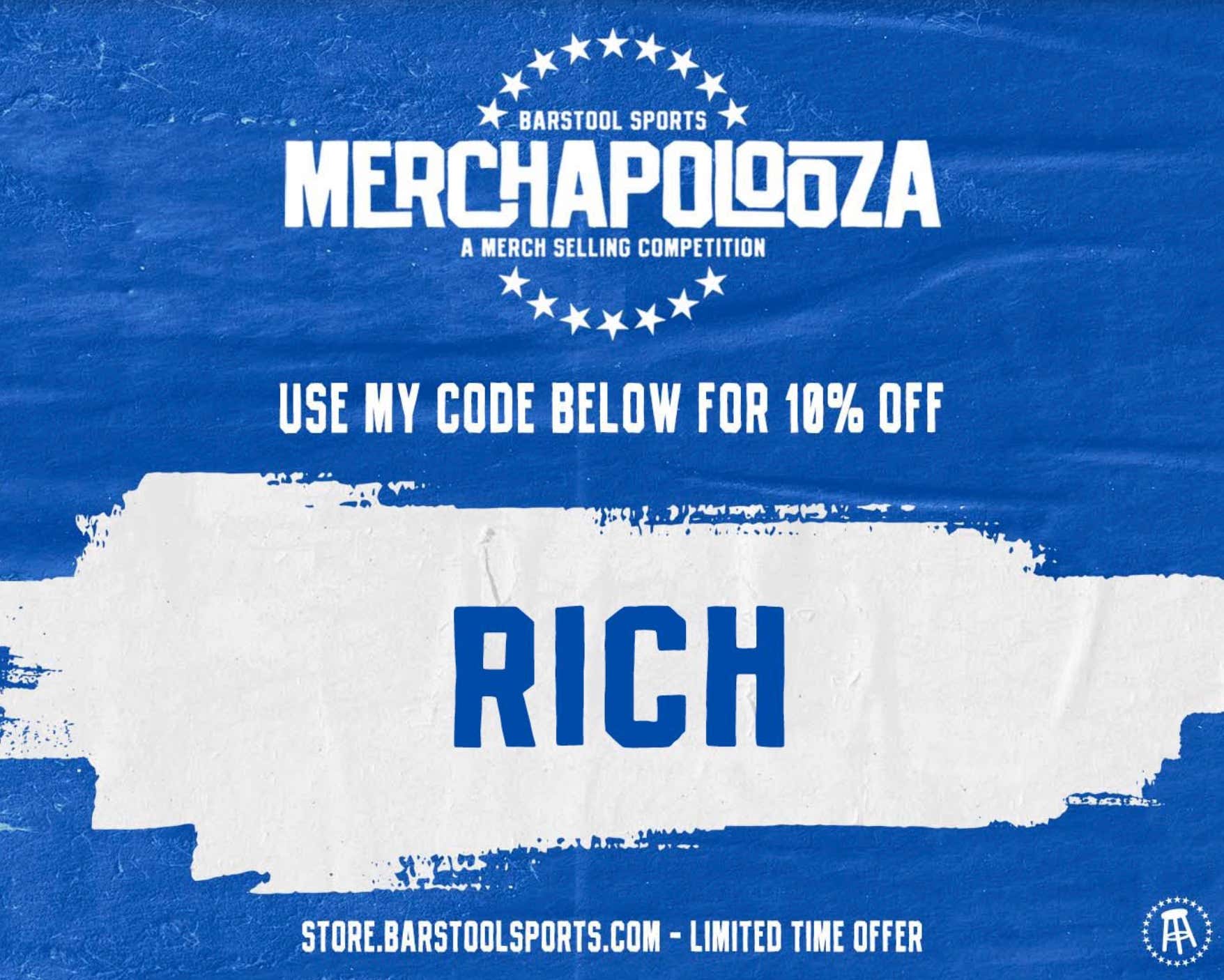 Yesterday was the first day of Merchapolooza, and boy are my arms tired. Don't get me wrong, it's been a ton of fun. I've been looking forward to this ever since I learned it was happening on Tuesday morning. It has certainly not disappointed. I'm pretty hungover right now from last night's festivities (sex & cocaine with the stripper Kate hired), but I'm going to power through. Today is the second day, and I'm sure it will be even better than first. Rihanna is tonight's closing act.

On a more somber note, my promo code is performing poorly. Despite my multiple tweets and single post on my Instagram story, I have yet to crack the Top 10 on the leaderboard. I haven't seen the full standings, but I would venture to guess that I am nowhere close. If more than a few people have used my promo code, I would be shocked. But that's on me. I'm not likable enough. I'm going to work on that. However, I refuse to just throw in the towel. I've come up with a list of reasons for people to use my promo code. Once this blogs hits the streets, I expect my name to skyrocket to the top of the leaderboard.

John Rich is a Real Name

There's a lot of names at this company that are frankly kind of dumb. Spider? Chief? Zah? None of those are real. They aren't based in anything. Real men use their god given name. I could have gone with something more clickable like J-Rich, J-Money, or J-Whopper, but my parents named me John Rich for a reason (because they didn't have the balls to name me Elmer like they originally wanted).

Despite my last name, I have very little money. I actually have negative money by a significant margin. $15,000 would put me $15,000 closer to $0. Let's take a look at the current leaderboard.

Everybody on that list is comfortably making 6 figures or more. You can tell by the cars they drive to the office. The Barstool Sports company parking lot looks like a Rolls Royce dealership. Jake and Billy just bought a yacht together. Murls has a penthouse on the Upper Westside. Jeff D. Lowe gets a $100 haircut once a week. I still ride the train to the office every morning with the undesirables. Not many people at Barstool can say that.

It Would Be Kinda Funny

People are putting so much effort into promoting this. People who have been grinding at Barstool Sports for years, and really deserve to win. Kate went as far as hiring a stripper (that I had sex with). It's no accident that the people at the top of the leaderboard are those who have worked hard to promote themselves and those who have worked hard to be super hot. Me on the other hand - what have I done? Make a couple shitty tweets? Post a blog about why I should win that puts down my coworkers in a way that they will hopefully take as a joke? I don't deserve to win. But it would be kinda funny if I did.

That's right. I have the power to do that now. If you don't at least get me on the leaderboard, you're going to get 12 minutes of thunder from Me, Chris Klemmer, and Caroline at 6:30pm every Monday-Thursday.

If I do win. There will be Friday Rundowns with Dave, Big Cat, and KFC for the rest of the year.

I have dirt on him. He got too drunk at the company party and told me his deepest darkest secret. I have a video of him saying it. If I release the video to the public, you'll never hear from Nick again.