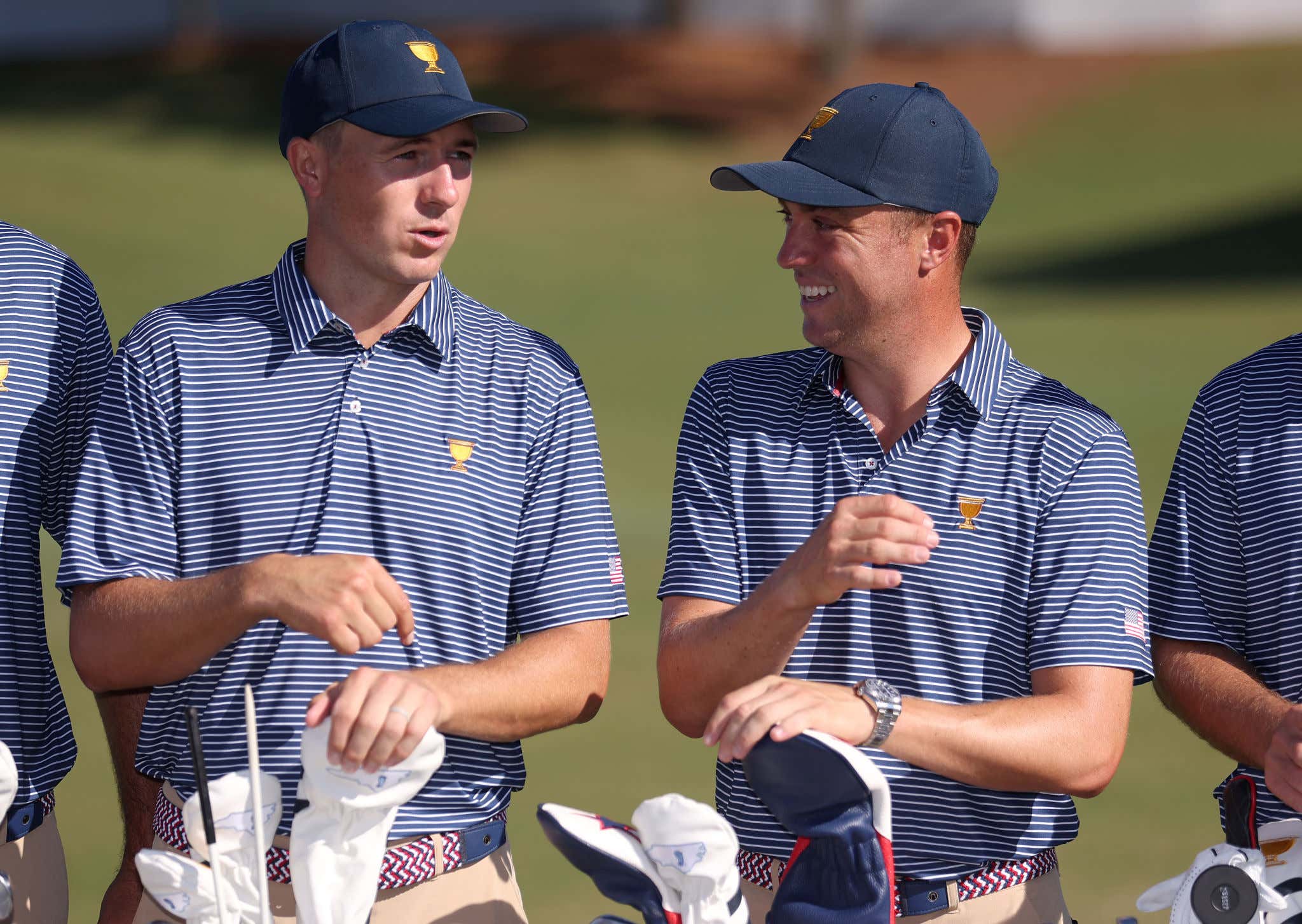 Let's start with a LIV disclaimer—yes, we know that Cameron Smith and Abraham Ancer and Joaquin Niemann are not here. We know  the International side isn't nearly as strong as it would be if the LIV guys weren't banned. So save the 10 seconds it takes to type your "no one cares about the Presidents Cup" and use it to say something nice to someone around you.

We're here at the Presidents Cup this week, and instead of focusing on what isn't, let's focus on what is. We have 12 of the 13 best American golfers on Planet Earth (the only LIV guy who likely would've made this team is Dustin Johnson) and a team of young and hungry Internationals with a massive chip on their shoulder. There's been a ton of talk this week about converting the Presidents Cup to a mixed event, with six men and six women on each side. Putting the merits of that argument aside, think about the message that sends to the Internationals: you guys are so overmatched that we need to fundamentally change the event to preserve its relevancy. That's as bulletin-board as it gets. Let's also remember the Americans were huge favorites three years ago in Australia and needed a furious Sunday singles comeback to avoid the massive upset.

All this to say: I'm excited about the Presidents Cup, and there's nothing wrong with you if you feel similarly.

With that, let's break down the five foursomes matches on deck for Thursday afternoon. A quick reminder that foursomes really should be called alternate shot, because that's exaclty what it is. One player tees off on the even holes, the other on the odd, and they alternate shots until the ball is in the hole. It could also be known as "I'm sorry" because there's nothing worse than having your partner stripe one down the middle and you chunk one into the piss on the next shot. That likely won't happen too much this week, however, because these are 24 of the best players in the world. But we digress.

No surprise that both these teams are going out first. Cantlay and Schauffele have grown close over the last couple years—they're around the same age, they're both from California, and their wives are pals as well. The Schauffeles and the future Cantlays went to Napa for some wine tasting after the Tour Championship:

Cantlay and Schauffele won both of their foursomes matches at last year's Ryder Cup. They play almost all their practice rounds on the PGA Tour together. When asked who the "best friends" on the team are, Jordan Spieth joked that they probably hold hands as they walk down the fairway. A no-brainer pairing for captain Davis Love III.

The same can be said for Scott and Matsuyama, the two most experienced players on the International team. Scott is playing in his 10th Presidents Cup and Matsuyama is the highest-ranked player on the International side. Captain Trevor Immelman knows his team absolutely needs to get off to a hot start to have any sort of chance, so it only makes sense to put his two horses out first. A victory here would set the tone, at least initially.

Spieth and JT go way back—cue the famous hamburger picture—and started playing together in team competitions back at the 2018 Ryder Cup…much to the chagrin of Patrick Reed, who couldn't understand why Spieth didn't want to play with him given their past success. Spieth and JT were a lone bright spot for that American side in Paris, winning three of their four matches paired together, only for Spieth to slump hard and miss out on the 2019 Presidents Cup. They reunited at last year's Ryder Cup and went 1-1 together. JT is the emotional leader of this team, but Spieth actually has the most team-play experience of anyone on the American side.

This is an intriguing pair for the Internationals; two of their better players (Conners is No. 26 in the world, Im is No. 19) and both guys flat-out flush it. Conners was the only tour player to finish in the top 10 in strokes gained off the tee and strokes gained approach in 2020-21, and he was fifth off the tee and 16th in approach in 2021-22. Such steady ball striking is essential in foursomes, where you can't overcome a bad shot the same you can in fourball. Im finished second in the FedEx Cup and ranked sixth in strokes gained overall last year. This is anything but a walkover, and Immelman is clearly front-loading his lineup.

Young's going to win PGA Tour rookie of the year, and the only thing he didn't do last season was win. The Wake Forest grad, who is 25 going on 45, had five runner-ups in his debut campaign including a solo second at the Open Championship. He mashes the golf ball and ranked second in driving distance and third in strokes gained off the tee last season. He is, however, prone to a foul ball or two, and I'm somewhat surprised to see him playing foursomes over a guy like Kevin Kisner, who's much steadier.

But Morikawa's as steady as they come. He's a far more known commodity, with two major championships to his name, but he's coming off a slightly disappointing season that did not include a victory. Morikawa struggled to produce his trusty fade all year and has continued to be streaky on the greens; he used a "saw" putting grip for most of the season but has since switched back to a conventional grip and changed his putter to match his new posture.

Kim—who goes by "Tom," because he loved watching Thomas the Tank Engine as a kid in Korea—might be the player I'm most excited to watch on the International side. The 20-year-old has catapulted to stardom over the last few months. He won an event on the Asian Tour in January finished second in one to get high enough in the world rankings to get into the U.S. Open. He took 23rd that week at The Country Club, then finished solo third against a loaded field at the Genesis Scottish Open. A solo seventh at the Rocket Mortgage brought him close to locking up his tour card, which he locked up by winning the Wyndham Championship despite making a triple bogey on his very first hole of the tournament. The victory made him the second youngest winner on the PGA Tour since World War II behind only Spieth. I spoke to him for the first time on Tuesday and he's got star written all over him—confident, funny, driven. I loved that he said he was rooting against countryman Y.E. Yang in the 2009 PGA Championship because he was such a Tiger Woods fan…and because, even at age 7, he wanted to be the first Asian man to win a major championship. Lee has done most of his damage at one golf course, winning the AT&T Byron Nelson in back-to-back years. Between his streakiness and Lee's inexperience, it's a big advantage for the Americans here.

The problem with this International team, at least on paper, is its lack of depth, and this is a bit of a mistmatch on paper. Scheffler is the No. 1 player in the world and had he not blown the FedEx Cup on the back nine on Sunday, we'd be talking about his season as one of the all-time greats. Which is crazy, given he was the last guy who squeaked on to the Ryder Cup team. It proved a monumental week for his development, as he went out first in singles and beat an in-form, world No. 1 Jon Rahm. He and Burns are close and frequently share houses together on the road. Burns is one of the best putters on the PGA Tour—he's ranked in the top 10 in strokes gained in each of the past two seasons.

Nothing jumps off the page statistically for Kim, who had just one top-10 finish in 29 starts on the PGA Tour last season. He also switched to a long broomstick-type putter just two weeks ago. Davis is a young Australian who hits it a long way and had a nice spell of play toward the end of last season, but he has little experience playing against these caliber of players on such a big stage. The Americans are huge favorites in this one.

Finau and Homa could well be the most well-liked pairing in golf history, and Max is coming off a truly wild victory at the Fortinet Championship that Danny Willett gifted him. This will be Homa's first Team USA appearance, and you can tell he's soaking up every minute of this—it was a goal of his to make this team since the very beginning of the year, and he's ecstatic to have pulled it off. Finau caught a major heater toward the end of the summer, shooting 43 under par over eight rounds to win the 3M Open and the Rocket Mortgage in back-to-back weeks.

Pendrith, a big boy from Canada, is the lowest ranked player in this competition at world No. 107, and Immelman passed over higher-ranked players to pick him for one reason and one reason only: he drives it miles. That's going to be a huge advantage at Quail Hollow this week, with the course playing as long as it is and the rough as relatively short as it is. Pereira, as you may recall, took a one-shot lead into the 72nd hole of the PGA Championship only to hit his tee shot in the water and make double. He likely would've teamed up with fellow Chilean and good buddy Niemann, but alas. This International team has some birdies in them.