Yes he was, and yes it was. A must win game for the White Sox last night, heading into a three game series with the Guardians, whom they trailed by 4 games. Thankfully for our good friends from Chicago, Cease's last two games vs. Cleveland consisted of 11.2 IP and 0 runs, with two wins. They had their BIG GAME GUY!

There's only one little problem: they lost.

Ding dong, the White Sox (April 8, 2022 - September 21, 2022) are dead. And what a horribly underachieving life they lived. As the prohibitive favorites in the AL Central at the beginning, they wanted all the smoke back in April.

Everyone's able to talk shit when they're supposed to run away with the division, but to the White Sox credit, they have continued to talk shit from behind as well.

"Going to crumble". You mean like the White Sox did in extra innings last night? Or like they have the entire season? Because now the Guardians hold a 5-game lead with only 14 to play, AND they have the tiebreakers over everyone in the Central, essentially making it 6. Even if the red hot Guardies somehow go from their 11 wins in 13 games streak to playing below .500 baseball the rest of the way out at 6-8, the White Sox would still need to win 12 of their next 14. DEAD!

And now, the youngest team in baseball by a mile gets to talk their shit:

Folks, the Guardians Over/Under win total this year was 76.5. To quote the last man who brought a championship to the city of Cleveland, "I'm not even supposed to be here." The future was certainly bright, but NO ONE thought this was our year. We were +1000 to win the division on Opening Day, and even as late as August while holding the division lead, the White Sox still were the favorites to win the AL Central.

Oh how that has changed….. 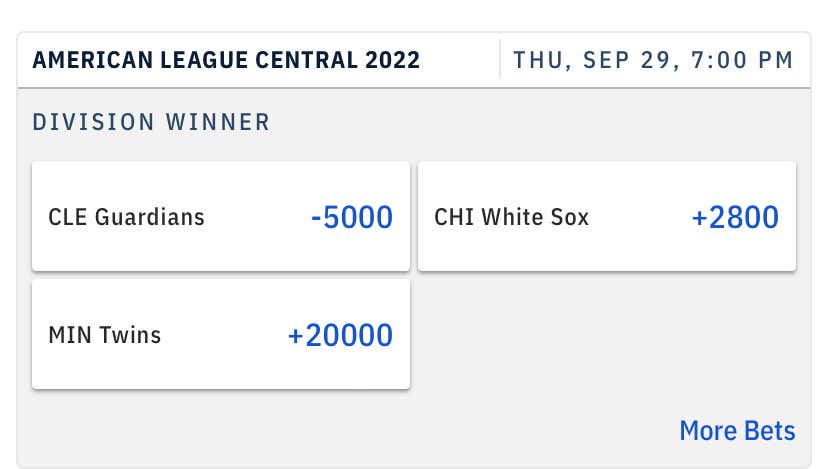 We are on to the playoffs.