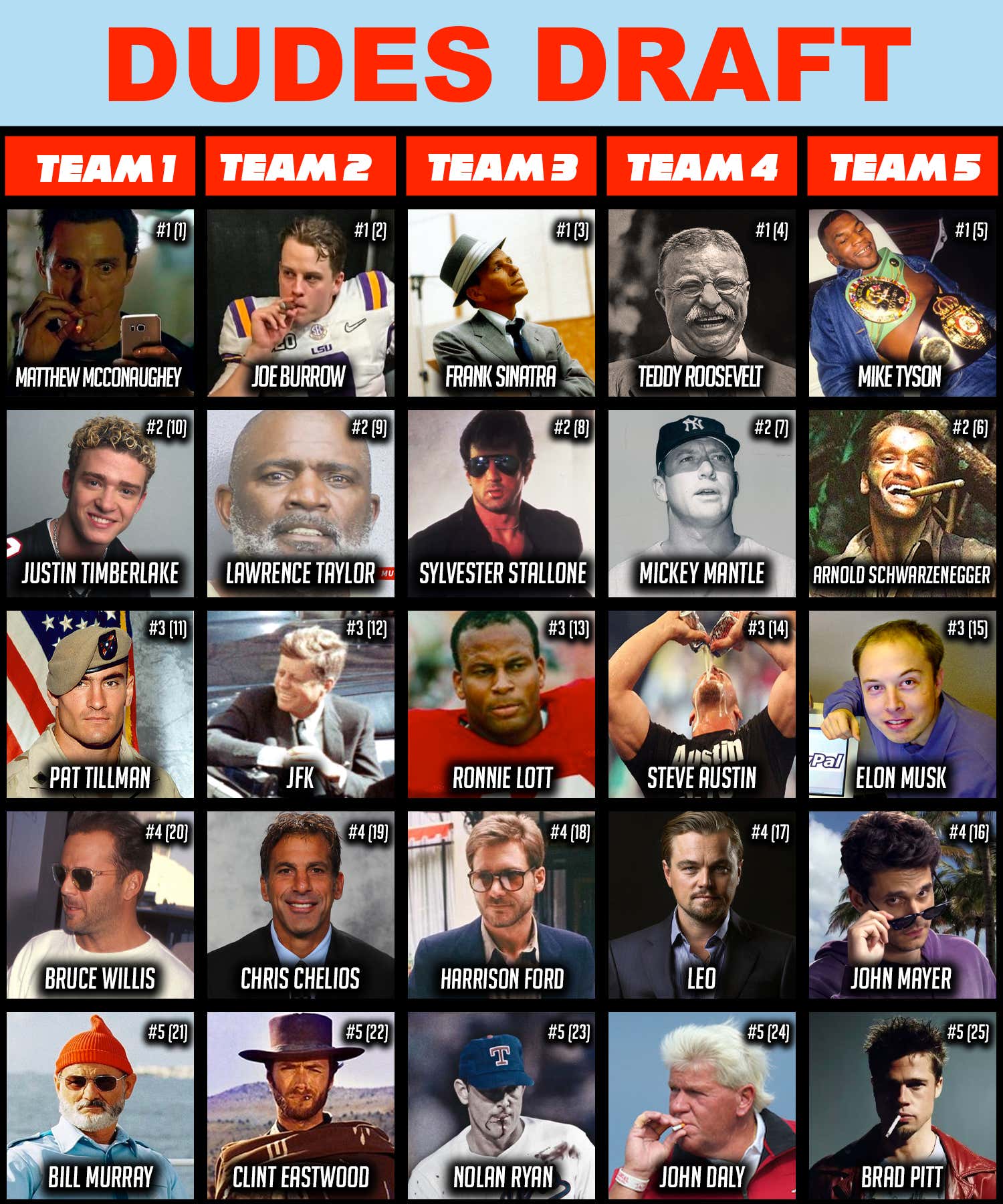 This week the guys welcomed on former Cubs pitcher Jake Arrieta, who co-hosts Starting 9 with Carl. He was a great fit for the Dudes draft. No real rules other than they could be either living or dead and had to be real people. I'm judging dudes as guys I'd like to personally have a beer with and talk about their lives which seemed to be in-line with the Chicago guys as well. So here goes:

Matthew McConaughey was an interesting 1.1. Definitely not unanimous and with his recent foray into the political world, a dicey pick. I can see some appeal, but above all other dudes is a reach for me. Justin Timberlake is just straight up a bad pick. Seems like a fine enough guy, but not I'm not trying to have a beer with any members of NSYNC. Pat Tillman gets nothing but respect in Round 3 and so far this drafter's best pick. Bruce Willis and Bill Murray round out a strong back half after an odd start to this draft.

Joe Burrow is a solid pick at #2, but I think it is a bit early to be on him. At the end of the day, the guy is 25, so there is so much that he's seen in life. Lawrence Taylor is an interesting one because in one part it's cool cause he's LT and a living legend, but he's also kind of problematic and gone through a lot of shit where I'm not sure I'd want to have more than one drink with him. JFK is an interesting one and could unlock a lot of cool secrets about the country, so I kind of love that as a 3rd rounder. Chris Chelios is one I didn't see coming, but with this drafter, I think makes sense, so I give a plus actually for not pandering and going with a personal hero. Clink Eastwood I think could've been great awhile ago, but after seeing Gran Torino, I'm not sure I want to drink with that dude in present day.

Frankie Blue Eyes is a sneaky awesome 1st Rounder. He's before my time really but based on the banter, seems like the coolest guy going. Sly writing Rocky and then starring in it is super bad ass. And then he did a ton of other stuff and was the A-lister in Hollywood forever. The guy must have a TON of stories. I like the sports angles here with Ronnie Lott who was a hard hitting son of a gun and Nolan Ryan in the 5th round is an awesome pick. Harrison Ford sandwiched in between is an interesting one as his career is Indiana Jones, Star Wars and so much more. The guys saying he wouldn't rehearse the lines for Star Wars makes him a real legend.

I'm not a history buff, but Teddy Roosevelt sounds like the coolest dude ever. After hearing the Drafter, he'd be my 1.1. I'm no baseball historian, but hearing that a huge star was getting dome during the 7th inning in a game? That sounds like some enjoyable fodder to discuss over drinks! Where this gets dicey is Stone Cold Steve Austin. Because he is a character. That isn't his real name. I absolutely would love to get a beer with him, but I docked this drafter half a grade as this would have been a flawless draft had there been no questions on this pick. But it's still solid as it's a great choice, just a little grey. Leonardo DiCaprio is a good pick in the 4th Round as his hit list is legendary. John Daly Round 5 is an elite pick and he could be a 1st Rounder.

This drafter won the selection choice chose to go #5. Not a bad strategy, but Mike Tyson is another guy I'd like to have one drink with and probably not more than that. Arnold Schwarzenegger is an interesting one, but it's tough with Sly Stallone going a few picks after him. Elon Musk has legs in the 3rd Round and I can buy into that. John Mayer and Brad Pitt both have crazy hit lists and are celeb A-listers, so maybe, I'm just a little cooler on them.

Who do you think won the Cool Dudes Draft? Vote here:

Also, be sure to check out the Barstool Store to shop all the latest Barstool Chicago gear. Use code: CHEAH for 10% off your order. 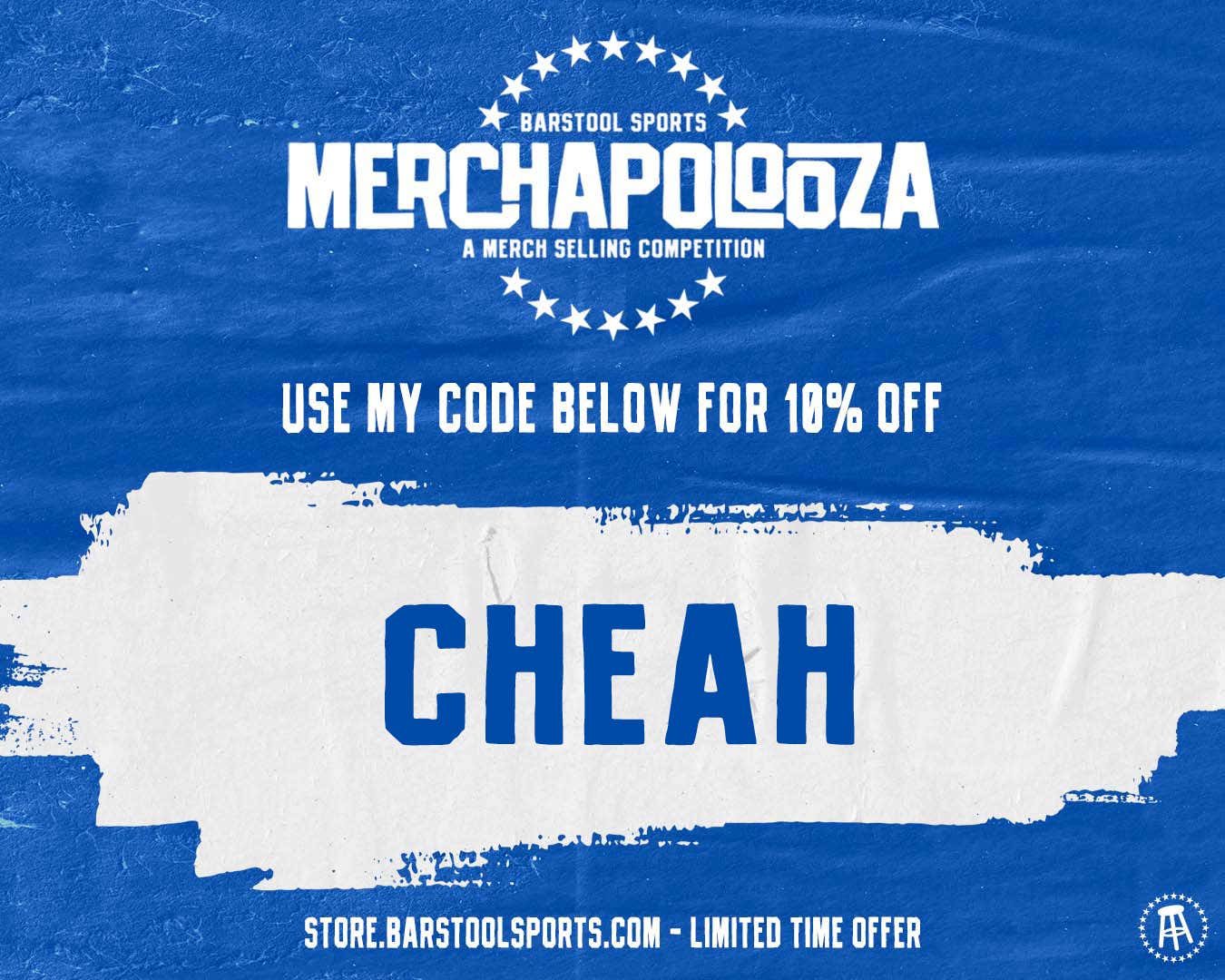 There are some great pieces out now that are perfect for a Chicago fall.

And make sure you're subscribed to the Barstool Chicago YouTube so you can get alerted when new stuff drops: