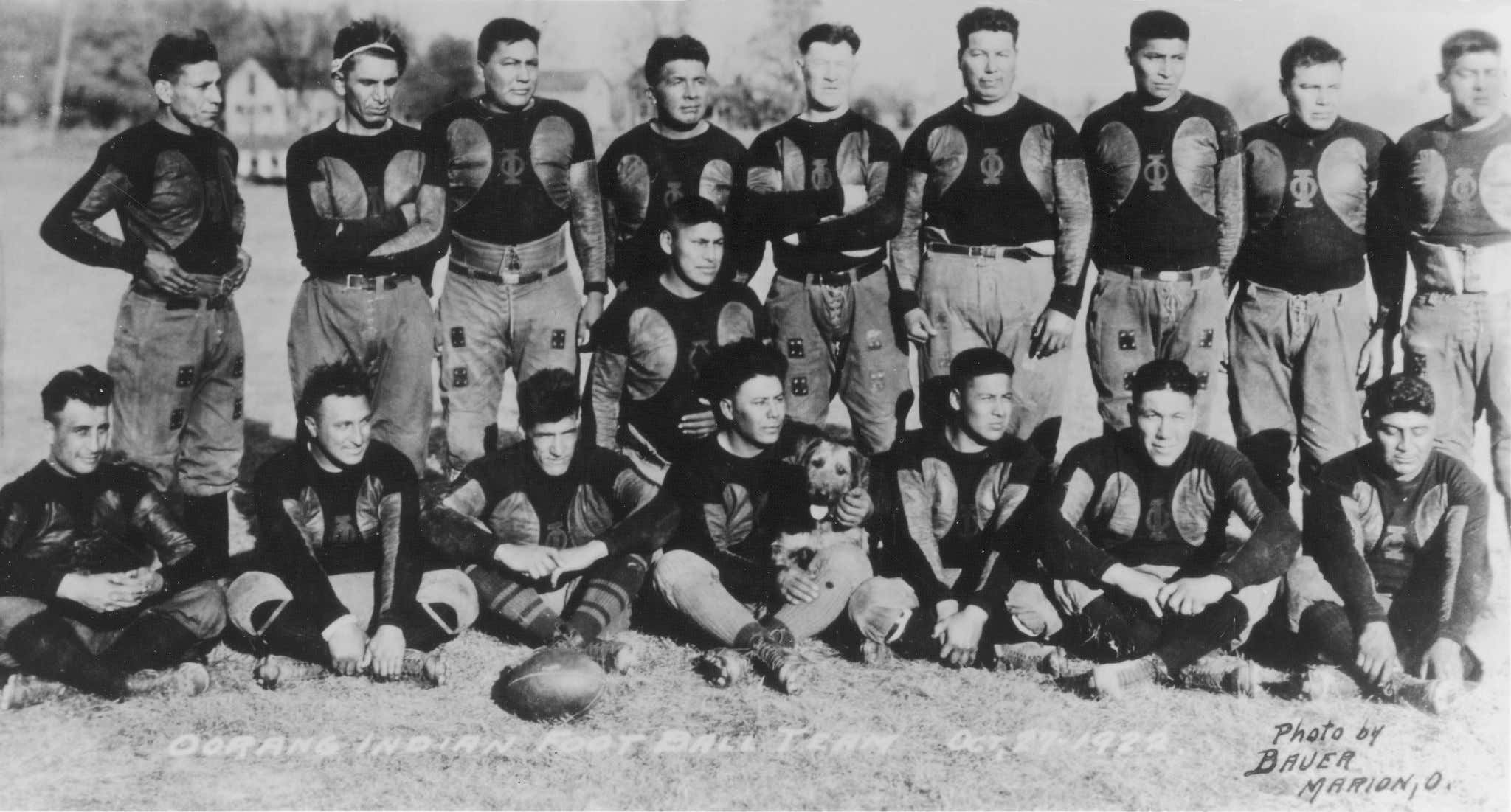 Get ready for a story of pure dudes being dudes lore by all characters involved including a dog breeder making dog breeder decisions like founding an NFL team of only native Americans, a famous Olympian player-coach going through a mid-life crisis, and the players living life like Dennis Rodman off the field.

Who were the Oorang Indians? A bad place to search for the answer would be to look up where Oorang is on Google Maps, because it’s not a place and never even was. Oorang was the name of team owner Walter Lingo’s dog kennel company in the 1920s and the sole reason he founded a football team was for a pie-in-the-sky marketing scheme to sell the Airedale dogs he bred.

This idea came after decorated Olympian Jim Thorpe said that Airedales were pretty cool, so Lingo slid in Thorpe’s pigeon carrier dms or whatever they did back then and soon enough the two went hunting together to consummate a budding bromance. Lingo convinced an aging Thorpe to be a player-coach on an all-Native American NFL football team (Thorpe was part native) to be called the Oorang Indians because Airedales and Native American culture were Lingo’s two life obsessions. Part of Lingo's deal required that all players help maintain the dog kennels at his business on a regular basis along with occasionally suiting up to play football in the National Football League.

Everything making sense so far?

In a time when treatment of Native Americans was certainly poor, all accounts point to Lingo just legitimately being a fan boy of Native culture and wanting them exclusively on his team after a famous native said Lingo’s favorite breed of dog were good boys. With the strategic business process planning of a 4-year-old, this man decided to found an NFL team and name it by thinking of his two most favoritest things in the whole wide-world and putting them together without a moment’s thought of where the team would even play.

All must have been well though as the players never felt mistreated by Lingo throughout the entirety of both of the franchise's seasons (oops spoiler alert!). Natives from all across the country – many over 40 years old and having never played football before – even made the trip to the team’s home town, LaRue, Ohio to try out for the team. For reference, LaRue is a place in Ohio that people from Ohio have never heard of. It’s not in bumbafuck. It’s in assistant to the regional bumbafuck. Below is a graph of each NFL team’s city population (except Chicago) in 1922, the year Oorang became a team. I had to leave out Chicago so you’d be able to see LaRue’s sliver of a bar: 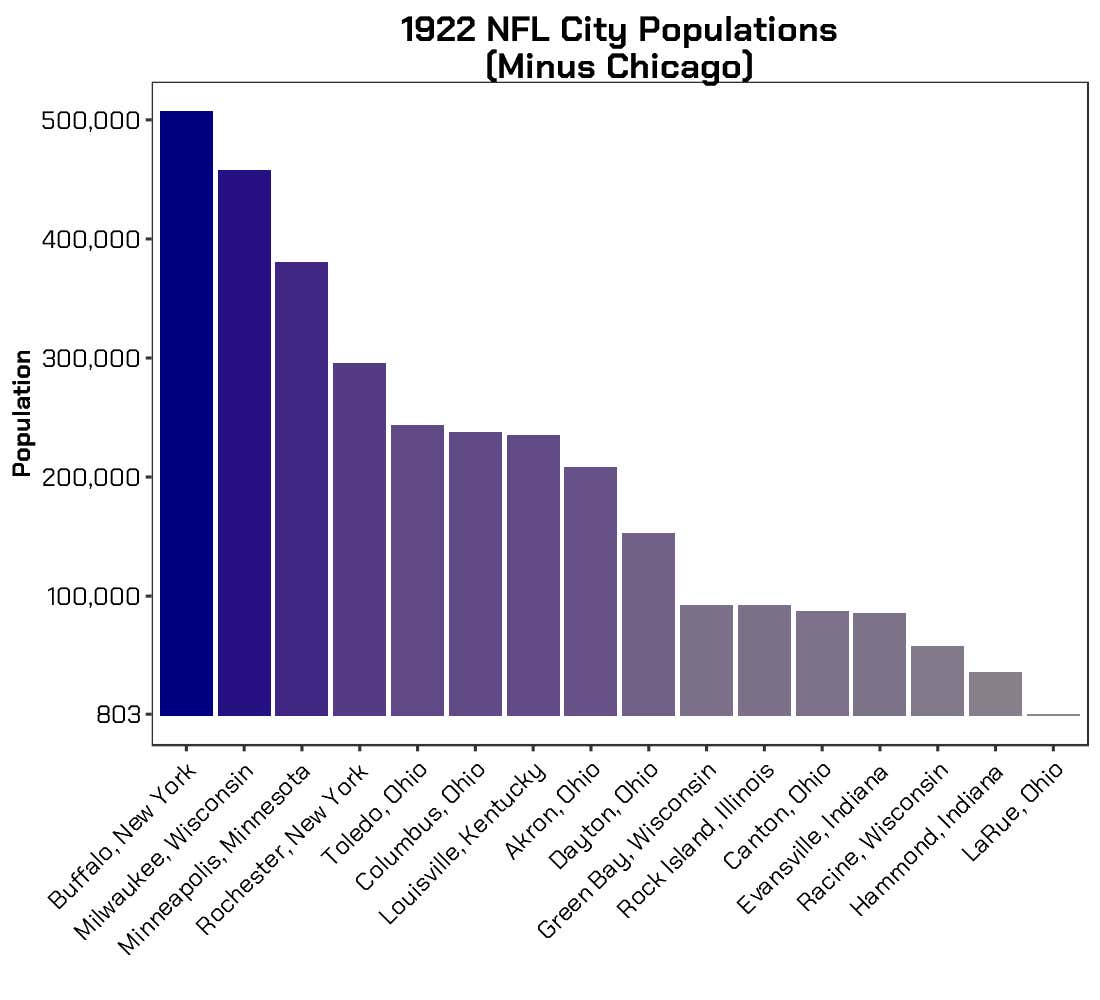 You’ll be less than surprised to learn that LaRue - with the population of a moderately sized cul-de-sac - had no football field suitable for a pro team. Instead, they got by bumming off the High School football team’s field with joint practices and travelled to the “big city” of Marion, Ohio (a larger town in Ohio that people from Ohio never heard of) to play both of the franchise’s total home games. Imagine having to go on the road for 18 out of your 20 total franchise games except for two times when you have to explain to an Amish horse-drawn carriage buggy driver how to get to Marion as he scoffs at having to go to a place with such little accommodation.

And let me tell you, this team was not amazing. In their very first game they lost 36-0 to Dayton with the final touchdown of the game occurring on an Oorang punt that the Dayton returner caught and - instead of running - punted right back which touched a confused Oorang player before Dayton scooped it up and ran down for the score.

Is that even a legal play? Can a team receive a punt/kickoff and elect to kick it right back to avoid any pressure of calling a pass play entirely? - Matt Eberflus

Things regressed from there in their second season as Oorang started 0-9 while being outscored 235-12. Ricochet fact: the point differential after the first five of these weeks was so bad that the 2019 Miami Dolphins were one of only two teams to ever do worse.

But here’s the rub. The boys on the team knew the whole gig was to prop up the Airedale business anyway, so they just rolled with being terrible. The games didn’t matter. Like, at all. For fuck’s sake, instead of game planning at halftimes, owner Walter Lingo had the team participate in the halftime shows to promote the Airedales and do other normal halftime things like tomahawk/knife-throwing demonstrations and wrestling real-life bears.

The Oorang boys knew that despite being well educated, white people took Native Americans as wild and uncivilized. This was as bigotry of low expectations as it gets. Here's the kick ass part though. Proving their intelligence, quarterback Leon Boutwell explained this perception as:

“a dandy excuse to raise hell and get away with it when the mood struck … we could get away with things the whites couldn’t. Don’t think we didn’t take advantage of it”.

That perspective is what makes this my new favorite NFL team ever. These guys partied like Gatsby’s all the time regardless if they had a game the following day. When a Chicago bartender gave last call at 2:00 am the night before a game, the team stuffed him in a phone booth and turned it upside down before continuing to booze. After a night out in St. Louis the year after, no one on the team was sober enough to notice the trolley they all boarded was going the opposite direction of their hotel until it got moving. No problem. They simply got out of the trolley, picked it up, turned it around, and gave the conductor the hotel address. I did not read anything about a rebuttal from the conductor.

I love this defunct dysfunctional team so much. What an era. The fact that this idea played out for an entire season of ineptitude and someone decided “You know what? Let’s run this back” is a subtle level that makes this entire crew even more likable. This team was a literal joke that they themselves were in on. I’d have gone full Elizabeth Warren to party with these guys, crack jokes while working the dog kennel, and periodically play football in the NFL. They even made up most of their plays in-game on the spot which I can only presume was due to the team’s busy off the field schedule. And the fact that Paul Newman never starred as player/coach Jim Thorpe in a Slap Shot version of this story titled “No Shot” is entirely disappointing.

So everyone raise a glass, flip a phone booth, turn a trolley around, or wrestle a live bear to celebrate the first NFL game 100 years to the day for Oorang - the only NFL city that wasn’t even a city, and the actual city was really just a small town where they didn’t play their two and only home games anyway.

P.S. LaRue, Ohio hosts an annual parade to celebrate this glorious team every June. They call it the “Oorang Bang”. That’s a fact.