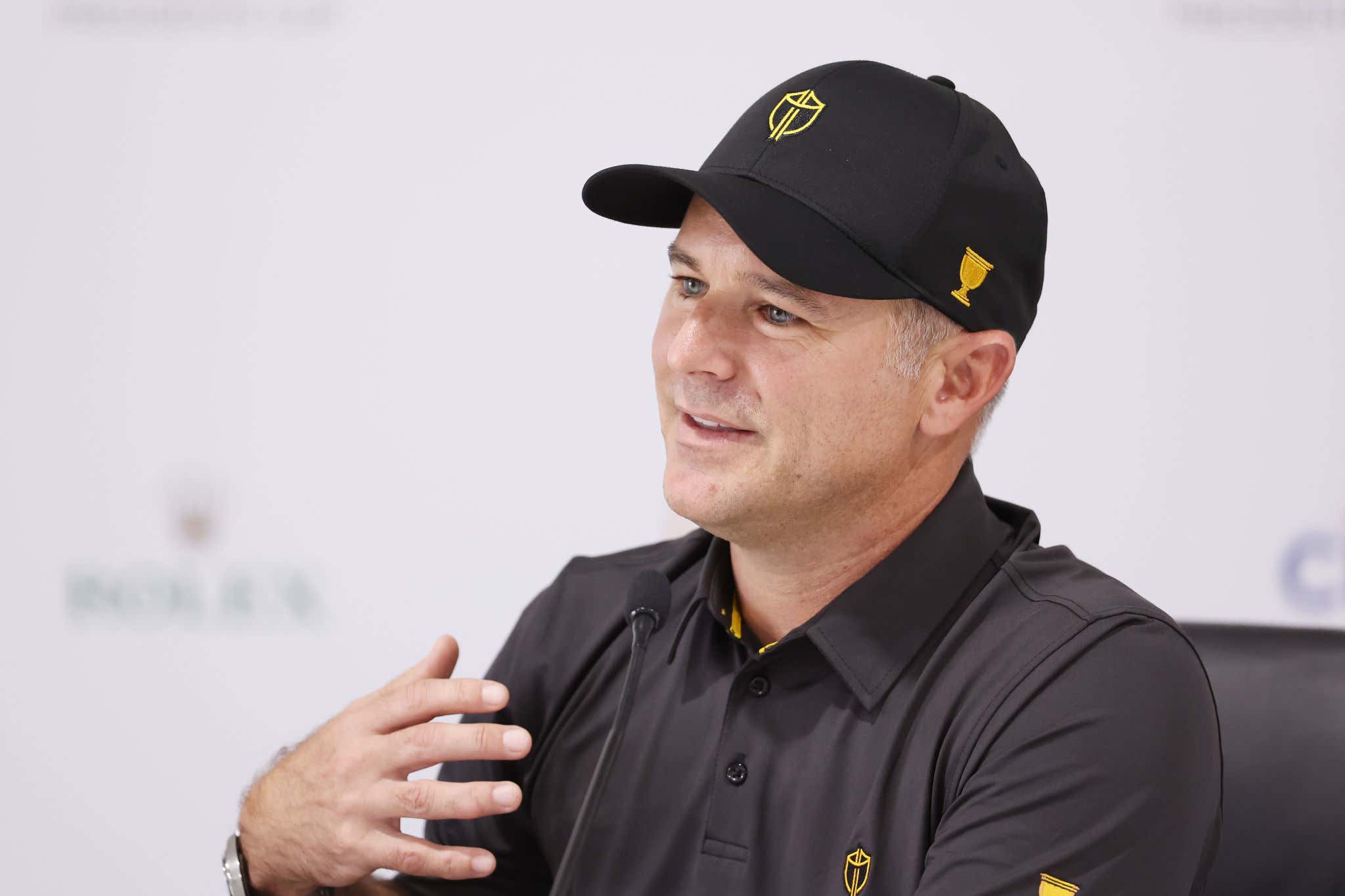 Trevor Immelman didn't sign up for this. I mean, he did, but not really.

Immelman was named captain of the International team for the 2021 Presidents Cup on April 7, 2020. That was just four weeks after shit really hit the fan on March 11, when the NBA canceled its season and we began to grasp the magnitude of the pandemic. We were all on lockdown, and LIV Golf was confined to rumors of a "Saudi Golf League" that had told agents they'd pay guys $30 or $40 million guaranteed to play on a new tour. (Those figures would turn out to be much, much higher, of course). LIV was an afterthought, and Immelman beamed at the idea of leading the 12 best non-American, non-European golfers into battle at Quail Hollow in September.

"It is going to be an amazing honor for me, and for my family and I to be a part of that,” Immelman said at the time. “The Presidents Cup and the PGA Tour [have] been a massive part of my career. And so for me to now lead the International team is something that really, it's a speechless moment. It's the highlight of my career and something that I can't wait for.”

It hasn't gone to plan, and that's putting it kindly. First, the pandemic proved longer and more disruptive than we imagined—so much so that the Ryder Cup couldn't happen in 2020. Then, asserting its dominance in the team-golf ecosystem, the Ryder Cup opted to go back to odd years beginning in 2021. That meant the Presidents Cup would be bumped an entire year to 2022. That may not seem like a hugely consequential move, but the captain's role is more involved than you'd think; you're essentially an ambassador for the tournament, and you're required to promote the hell out of it. Immelman signed up for a 17-month process that became a 29-month process—the last four of which have been absolute chaos.

It began with the very first LIV Golf event in London, which featured a trio of Immelman's fellow South Africans in Louis Oosthuizen, Branden Grace and Charl Schwartzel. All three were immediately in the PGA Tour doghouse, with the PGA Tour owning and operating the Presidents Cup, all three were immediately removed from Presidents Cup consideration. Two more contenders, Abraham Ancer and Carlos Ortiz, dropped out when they teed it up at LIV Portland. But the most crushing blow came after the FedEx Cup playoffs, when reigning Open and Players Champion Cameron Smith, locker-room leader Marc Leishman and the hugely talented Joaquin Niemann made the LIV leap.

"It was delivered to me right from those players," Immelman said. "We're a tight group. All of those players were very open and honest with me throughout their process, telling me exactly where they're at. I was up to speed on it. Everybody has a right to make their own decisions, and I respect those guys making those decisions. I also do respect them for keeping me in the loop, making sure I understand where we're at at all times so that I could be as prepared as I could. So I thanked them for that. Am I disappointed that they're not able to be here? Absolutely."

The International team assembled here at Quail Hollow features eight rookies and five guys ranked outside the top 100. The American team has zero guys outside the top 25. The Internationals were always going to be up against it this week—they've won the Presidents Cup just once in 13 tries, and this young American core showed what a wagon they are at last year's Ryder Cup—but with the LIV absences they are massive, massive underdogs. Immelman knows this, and so he sought clarification on why Oosthuizen in particular couldn't play. The Presidents Cup handbook clearly states that players do not have to be PGA Tour members to be selected, and Oosthuizen resigned his membership so as not to face disciplinary action.

"I didn't think I did anything wrong," Oosthuizen said at last week's LIV event. "I made my decision where I am playing golf, but I didn't do anything wrong while I was a PGA Tour member. It's a bit of a punch in the gut not to be able to play (the Presidents Cup)."

The PGA Tour, however, saw it differently, telling Immelman that Oosthuizen had allowed himself to be used in LIV promotional content without a release. That constituted an infraction, which apparently took him out of consideration for this week. And so Immelman used his six captain's picks on guys the casual golf fan might never have heard of: K.H. Lee, Sebastian Munoz, Christiaan Bezuidenhout, Taylor Pendrith, Si-woo Kim and Cameron Davis.

"It's just an unfortunate situation for him—it's not fair," is how Justin Thomas put it. "This is two years in the making of thinking about who your team is going to be, developing relationships and friendships with players. It's tough. We didn't want it. He didn't want it. The tournament didn't want it. Nobody wanted it. It is a bummer, but he's put together a very strong team with, camaraderie-wise, one of the best they've had. It's probably not the team he would've drawn up at the beginning of the year or halfway through the year, but it's who he has now and I'm sure he's more than excited about it."

He is indeed. If success is moving from failure to failure without loss of enthusiasm, Immelman has proven himself a successful captain with the way he's handled himself and his role despite all the daggers his team has absorbed. He spoke enthusiastically about his young side on Tuesday, which he clearly takes pride in, and they're leaning all the way into the underdog role. And even if they lose by a million, well, that's what everyone expected.

That's the message Immelman has passed onto his players. He has proven to be the perfect man for this most turbulent captaincy, and his players certainly don't feel inferior to the Americans, even as Vegas insists they are.

"He's been thrown maybe more curveballs than any other captain, with the pandemic and then the LIV Golf players who likely would have played on this team if they weren't there," said Adam Scott, playing in his 10th Presidents Cup this week. "He's dealt with it incredibly well. That's why he's the captain. He's a really well put-together guy.

"He really embraces the things he does and he does a really good job at it whether it's his work, his captaincy, anything. I've known him for a long time. I think he's handled it incredibly well. He's really nurtured everybody who's looked like making this team into a really good spot this week. There are 12 very excited guys playing for him."

Those 12 can't wait for that first tee shot on Thursday. And, after all this, neither can Immelman.