Tuesday night, the White Sox shit down their legs and the season is now over. Shame on them. I mean that very, very sincerely. The Chicago White Sox - from Jerry Reinsdorf on down through the the bat boy - should be ashamed of themselves because this pathetic season was completely self-inflicted. It makes me sick to my stomach. They were a major part of what was the worst summer of my life, 2020 included.

It sucks, but because I'm addicted to them, I am already trying to figure out how to fix this mess. I'm not going to speak for the entire fanbase, but they have lost my trust and I truly feel that that is a common sentiment amongst many White Sox fans. For me personally, it started with the Leury Garcia signing last winter. That signaled to me that they weren't going to try to sign any of the seemingly endless blue chip free agents that were available last offseason and that they would, once again, be shopping in the bargain bin.

Don't forget though, the organization said it wants to be a major player for the biggest and brightest stars in the game:

To get back on track to current days though, I'll say this - make no mistake about it; Leury Garcia doesn't belong in Major League Baseball. He excels at nothing. Bad defensively at every position, an awful base runner, and BRUTAL offensive player... and they signed him to a 3 year deal. It makes me sick to my stomach.

This was on the heels of Rick Hahn addressing the media and exclaiming (paraphrased) that they need to check the following boxes this winter:

Then as the lockout ended, they talked about budget constraints and how they had to move Kimbrel's deal just to figure out how to get a legit talent in RF. Enter AJ Pollock. Pollock was revered for his ability to hit RHP, something that he did not do whatsoever in 2022:

Horrible. And they addressed 2B by adding an over the hill Josh Harrison (who wasn't AWFUL this year), and replaced Rodon with Vince Velasquez, who should have been a non-roster invitee to spring training at most. This was after they let Carlos Rodon walk WITHOUT issuing him a qualifying offer.

Rodon will finish this season near the top of NL Cy Young voting and they let him fucking walk because they were scared he MIGHT accept a 1 year deal for $18MM.

That is nothing other than gross negligence, and yes, I spoke with a Boras Corp. rep and he told me to my face that that was solely Jerry Reinsdorf's call. That Jerry was too worried about the 1 year deal because of Rodon's injury history. Get the FUCK OUT OF MY FACE with that garbage. Even if he doesn't want Rodon back, go and sign someone that has equal potential to dominate lineups like he can.

Fast forward to today. The white sox - a team many unbiased pundits assumed would cruise to a division title - are now all but eliminated from making the playoffs, even though they reside in what is probably the worst division in baseball.

Back to my addiction. This is what I think needs to happen this winter:

1. Tony LaRussa needs to be gone for good 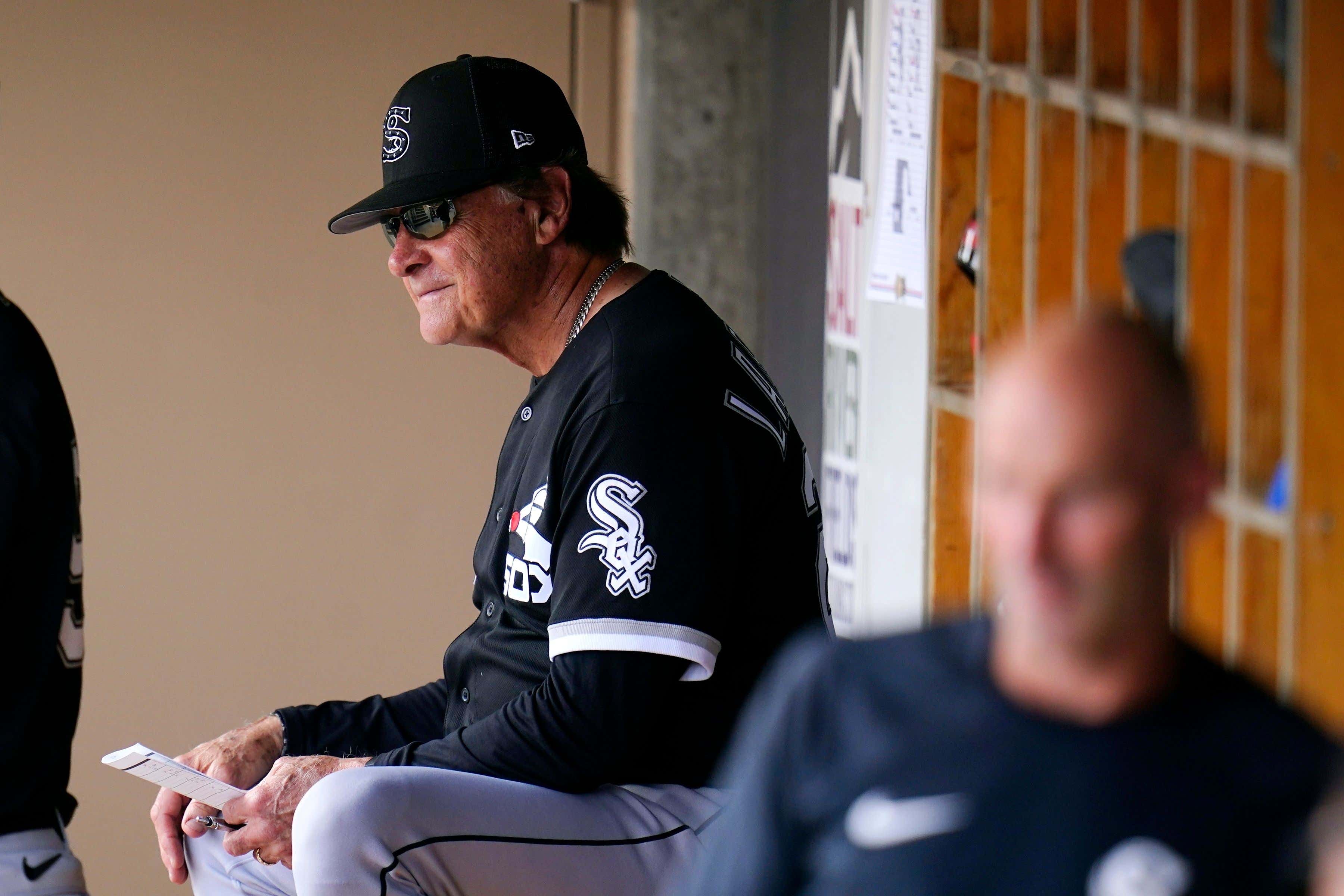 Self explanatory. He needs to be far, far away from this team. And that's not because he's some clubhouse cancer - he isn't. I know that for a fact. Players have told me he sincerely cares about them and wants to win and puts in a lot of work to do so. The only issue is he sucks at managing now. The game has passed him by and Jerry Reinsdorf did Tony a disservice by persuading him to get back in the dugout. The entire fanbase loathes him (even if unfair) and we'll have nothing but bad memories of him in spite of his HoF career.

Gonezo. Never again. Get a new aged mind in the dugout.

But who do they replace him with? Miguel Cairo? If he's their guy after they perform a long and lengthy search that digs into the bowels of the 29 other organizations, then I'm cool with that. Don't just hand him the fucking reigns though. That would be the most White Sox thing they can do, and in order to right this ship, the White Sox can't do White Sox things. They need to do the exact opposite of every instinct they have. Straight up pull a Costanza.

Here are their respective stats this year:

Bad, bad and bad. Of the three, I truly think Gio regains his 2019-2021 form. People will bitch and moan about spider tack, but Gio was really good after the ban last season. I'm just of the opinion that he bulked up too much over the winter and lost flexibility in his core, which led to a decrease in fastball velo. He'll get back to the drawing board this winter and rebound in his final year before free agency. I have little, if any, doubt about that.

Grandal was an abomination to the lord this year. On top of being hurt, his knees are cooked, can't catch anymore (we'll get to this later in the blog) and he looked like the Monstars zapped his powers from his when he was at the dish. He's got 1 year left at like $18MM or w/e. 99.9% chance he ain't going anywhere.

And then we get to Yoan Moncada. My (completely facetious) banned list was born because of people shit talking Yo after his 2017-18 seasons. I saw the raw talent, the eye at the plate, the power potential and thought he'd be a star in due time. That's exactly what he was in 2019. A star. Since then? Complete dog shit.

He got paid and looks like he doesn't give a fuck. He's also expensive next year and really expensive in 2024 and on a team that pinches fucking pennies like the white sox do, they don't have room for expensive players that completely suck ass, and that's what Yoan Moncada. They need him to be, at worst, the 2021 version of himself. Anything less and he should be considered a complete and total bust.

Holy shit this is infuriating. The white sox have known they've needed to acquire at LEAST 1, but most definitely 2 left handed power bats for like 3 decades now. The two obvious positions being RF and 2B. They have no done it. Instead they traded for the aforementioned AJ Pollock and signed Harrison and Andrus off the scrap heap. BRYCE HARPER WOULD HAVE BEEN A PERFECT FUCKING FIT IN RF FOR YOUR TEAM JERRY. A REALLY PERFECT FIT.

Best player that fits the LH bat mold that's a FA this winter is Brandon Nimmo. I know he doesn't hit for a shit ton of power but he's a stud defensively and peppers the ball off RHP. He'd be a perfect top of the order bat to go after.

He should not take up a roster spot in any single way. Not on the 40 man, not on the 26 man, not on the bus charter to Midway. GET RID OF HIM. Release him and eat the money.  Let Mendick, Romy and Sosa duke it out next year for the utility swing man spot. They're all better and you are trying to, by your own words, win world series titles.

But there better be a quality 2B that shits on RHP brought into the fold next year. I don't care how they do it. Figure it the fuck out.

5. Let Jose Abreu Walk and Sure Up OF Defense

This is by FAR the most difficult decision to make because it's an emotional decision (build Pito a statue), but Abreu was also the White Sox best hitter this season, and he plays every single day without bitching and moaning about his "legs barking". But he's also old af and there are 100 1B/DH types on the roster already. He makes around $18MM. Use his money to sign/trade for a stud bat that plays RF or 2B and SHITS ON RHP.

The roster clearly doesn't work with Abreu, Vaughn, Grandal, Sheets and Eloy. It just doesn't. Let Abreu walk, move Vaughn to 1B, keep Eloy at DH, catch Grandal and pray he bounces back, and do whatever with Sheets. Trade him, stash him in Charlotte as depth, whatever. But they have to be more athletic and better defensively next year. This team as currently constructed doesn't even know how to hit a cut, let alone play average OF defense. Get legit OF talent (BRANDON NIMMO) and build a more balanced roster. You can NOT go into 2023 with all of these DH type players and unfortunately Abreu is probably the odd man out due to his age, position, and yes, cost.

I hope he signs with Houston or someone. He deserves better.

Oh, and like I said, SIGN BRANDON NIMMO. Don't cheap out. Just do it. Make him an offer he can't refuse, and do it.

If the White Sox do it right (lol), the rotation will once again feature Carlos Rodon next year, as he's the best FA on the market. A Cease/Rodon/Lynn/Gio/Kopech/Depth rotation would be pretty fucking good to enter 2023 with. Then you can bring back Cueto or whoever else as depth for the inevitable trips to the DL. I'd also have Crochet in Charlotte stretching out his arm once fully back from TJS.

Kopech obviously lost a ton of steam in the 2nd half which should shock nobody at all, but it was he who the club tagged as the dude to replace Rodon's 2021 statistical output. He didn't. He wasn't ready to do so. Now that they know that, they need to find that stud TOR pitcher. To me, that's Rodon. Again.

All in all, this organization has a lot of work to do. A SHIT ton of it. And they better fucking make it happen. Laurence Holmes nailed this 17 min diatribe on the state of the organization:

Hop to it, White Sox. Clock starts now. Figure it the FUCK out because this ain't working.