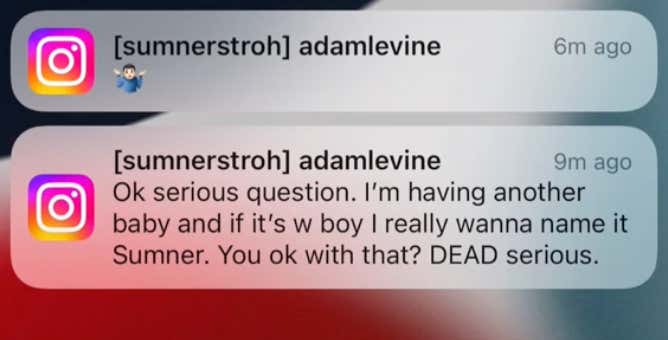 FUUUUUUUCCCCKKKKKK. Well, i mean, he's guilty right? Reminder, not even a week ago, Adam and his wife Behati Prinsloo announced they are expecting their third baby:

I know people have affairs all of the time. Behati might even know about it, the brazenness in which Adam is just DMing this girl on Instagram makes me think that it's kind of NBD if he got caught by his wife, right?

That being said, it's so, so fucking weird to name your kid after an ex mistress. Boy or girl, doesn't matter. There are a BILLION names in the world, just choose one that ISN'T the name of someone you had a year long affair with! I feel bad for this girl who told a few friends about the affair when it happened (she was younger) and they betrayed her trust and tried to sell the screenshots to the tabloids, hence her making this video. If she didn't make it, would it then all come out that he had an affair with her, after he named the baby after her? What's worse? I feel like this is the better alternative. Nip it in the bud before the kid is born, change up the name, forgive and forget if possible.

I've always been in love with Adam Levine but I've heard over the years that he knows he's hot and is kind of a dick because of it. Guess this fits that narrative! This is obviously not the first or the last time we'll hear about a rockstar having an affair, but the first we've heard of the rockstar then wanting to name his child after his mistress!