Ok, now onto the blog (I started it last month but it's now more relevant than ever):

My boyfriend Pat sits at his desk, both feet tapping our faux-hardwood floor incessantly. His hair: disheveled, beard: overgrown, Kottonmouth Kings "I WANT WEED" shirt that I keep trying to throw out because he has the audacity to wear it to the playground with our son and that KILLS me: wrinkled. He leans forward, migrained head in hand, as he calls yet another pharmacy: 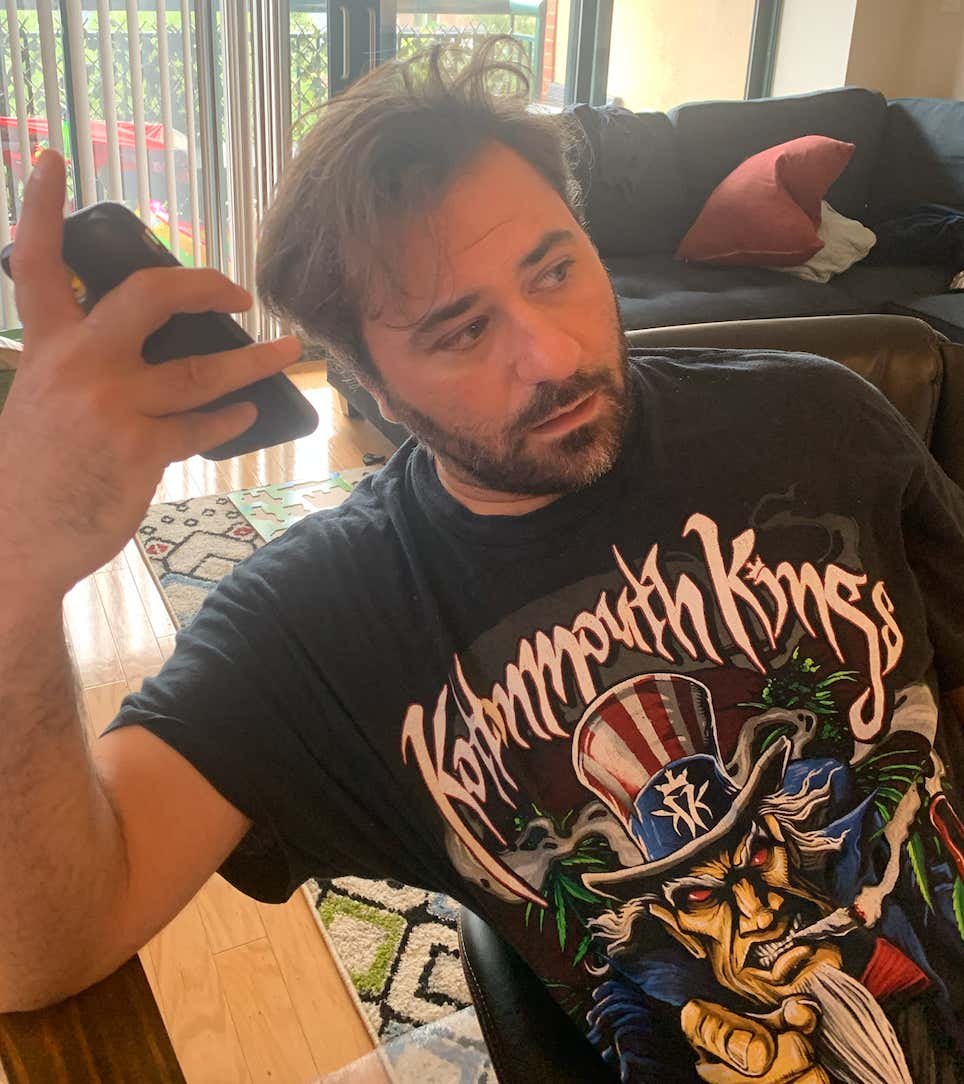 Bonus: Me in his face taking that photo: 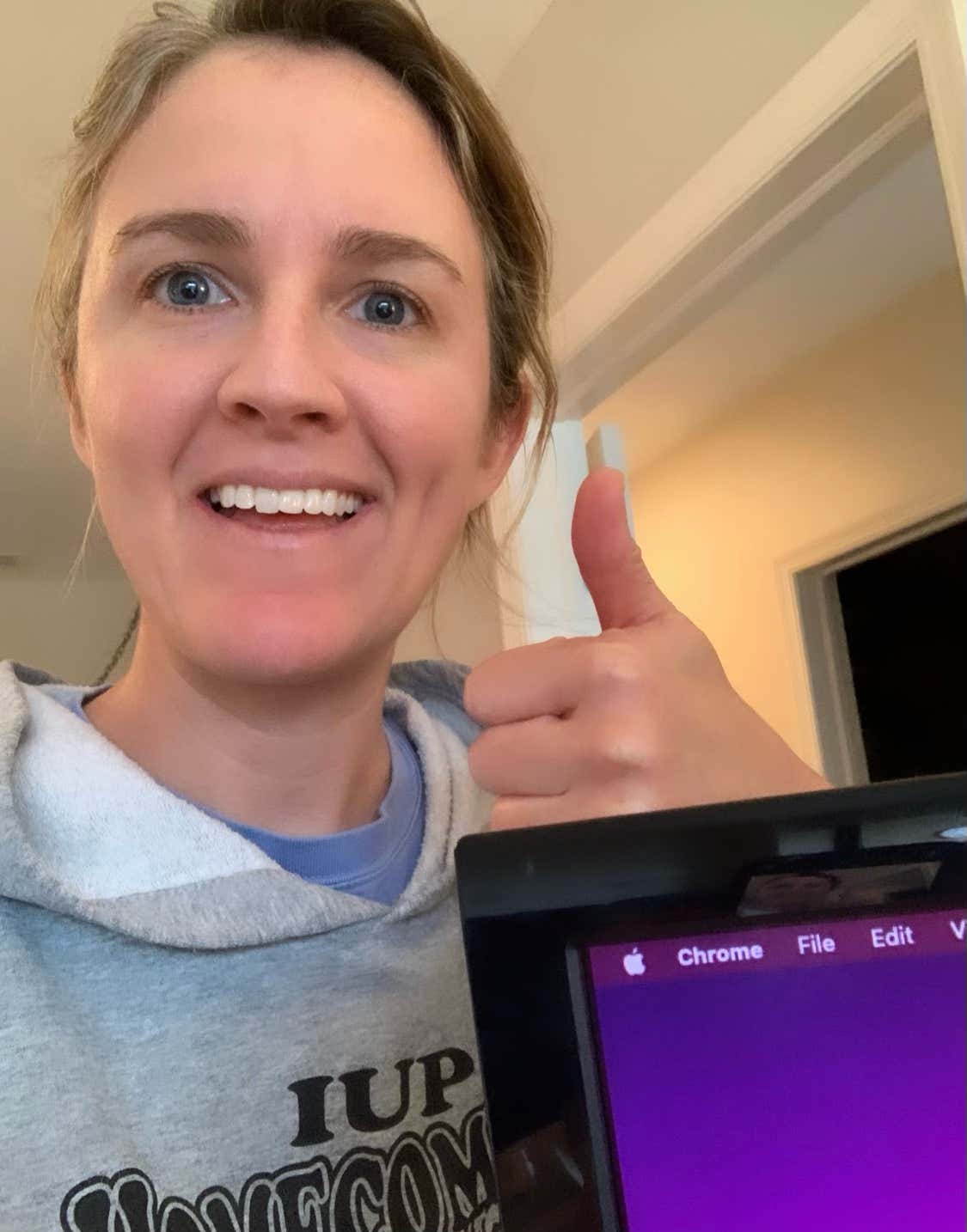 Today marks nearly a week since he ran out of Adderall, which he's been taking every day via prescription for years (legit ADHD diagnosis), and he cannot find a refill anywhere.

"Yes. No. Yes. Speak to a pharmacist. SPEAK. TO. A. PHARMACIST," he says to the phone robot.

He's moody, jittery, lethargic, has had a headache for 5 days, and is straight up not a good time to be around right now (said with love ha ha seriously what the fuuuuck tho ha ha when Sunday Ticket wasn't working yesterday I thought he might leap off the balcony ha ha)… BUT he's feeling hopeful since someone on Twitter tipped him off to a Jersey City CVS only 30 minutes from our apartment that had some as of this morning.

When the robot switches to the Jersey City pharmacist Pat cuts right to the chase,

"Hi, do you have any adderrall there?"

"We've dispensed so much out that they limited us, and now we are out. Sorry" ::click::

Other desperate souls got their first, and thus pharmacy #17 is crossed off the list.

Pat stares up at the ceiling & his legs resume the taps. I decide now is not a good time to bring up how much I hate his Kottonmouth Kings shirt again, but I do it anyway because I have low emotional intelligence and I'm annoyed he slept in so long. He walks into the bedroom, shuts the door and I can hear as he begins this phone cycle again with another pharmacy. Come onnnn lucky #18!!!

When his prescription was almost up last week we had zero clue there was any type of shortage at all until our local Walgreens said he'd have to wait TWO MONTHS for his refill. Stunned, he asked "why?" and she said he'd be lucky to find it anywhere. That's where it all began. I looked around on Twitter and realized it's a huge problem right now.

Several drug manufacturers have had the brand or generic pills on backorder over the past month. The problems started with a labor shortage at Teva Pharmaceutical Industries Ltd., the top seller of Adderall in the US, which led to limited supply of brand-name and generic instant-release Adderall. Soon after, Teva and three other companies -- Amneal Pharmaceuticals Inc., Rhodes Pharmaceuticals LP, a subsidiary of Purdue Pharma LP, and Novartis AG’s Sandoz unit -- had generic extended-release Adderall on backorder.

The disruptions are occurring at a time of record-high demand driven by increasing ADHD diagnoses. During the Covid pandemic, the federal government also made it easier for clinicians to prescribe the drugs through telehealth appointments, which removed barriers to access and also made possible the growth of online startups that connect patients with prescribers.

* Regarding that 'labor shortage' at Teva - just last month they laid off over 300 employees & one of their troubled plants closed, putting pressure on other locations to pick up the slack. Also worth noting, in 2020 they were "charged with conspiring to fix prices, rig bids, and allocate customers for generic drugs" among other things, so I don't exactly buy every explanation they toss out there. #TinFoilHatKatie

* As for the Telehealth Adderall prescriptions, many major pharmacies have begun delaying or blocking those altogether after crackdowns by the DEA/FDA, because they'd become such an easy loophole for a "class II amphetamine". Also, I was seeing people saying the DEA has cut down on how much of the drug can be produced this year (but haven't been able to find a legit source confirming that).

* And about that peaking demand, "Pharmaceutical research provider Iqvia Holdings Inc. reported that Adderall prescriptions dispensed in the U.S. rose to 41.1 million last year, which was more than 10 percent higher than what it was in 2020".

So… production hold-ups, wayyyyy higher demand, ever-changing regulations.. This may get worse before it gets better.

The weird thing is that in all the news reports I'm reading, the pharmaceutical companies, major pharmacies and the FDA are all saying versions of, "Oh, it was a tiny problem here & there but it's pretty much resolved now," but that's simply not the truth. I've listened to Pat make those calls, and have talked to friends who are in the same boat right now, and a quick search of key words across social media will show others across the country also unable to find any.

We realize it's not life & death for Pat, but to put it eloquently it still sucks. Whereas in a past life I'd take one & party my ass off at an all-day tailgate or whatnot, he'll take one & calmly sit at his desk working for hours & then organize the fridge. Also, I think anyone who takes medications for their brain can attest, coming off a drug unexpectedly and cold turkey is rough going. So far it's like he's stuck in a bad hangover that could last for several weeks.

As of now he's got 2 prescription requests in at CVS and Walgreens and checked in on both today, but neither has received any new product. To close this out I asked what his plan is if there truly is none to be found at this point:

"My plan? My plan is to just not be on adderrall, Kate," he muttered snobbily before mumbling something about the "dark web". 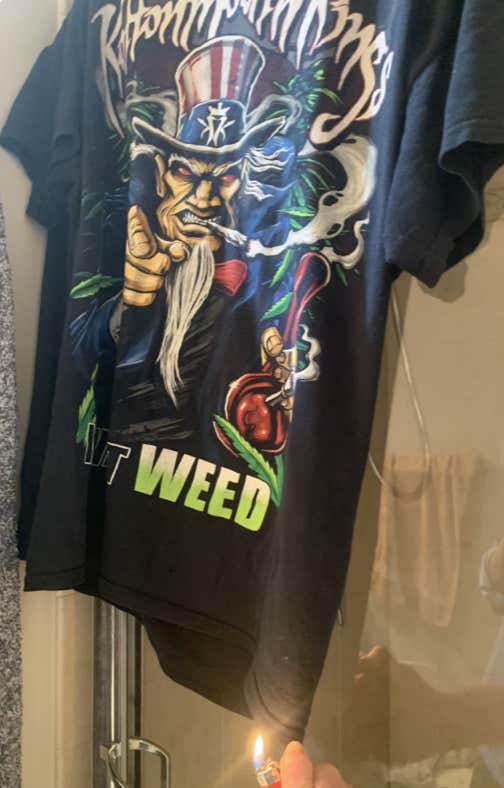 Have to admit, I know Adderall has been very helpful to him and I'm no expert, but he's also taken it for so, so long that I wonder if that's created an addiction/negative side effects for him that now outweigh the good. A little part of me is hoping he gets through 'the hangover', rolls with the break & we can see how he does without it. I like to imagine a week from now he wakes up one morning with fresh clarity and realizes he's been doing crazy things like rooting for the Washington Commanders.

Anyways, if this is affecting a friend of a friend of yours and they've been looking for an alternate source, tell them to be extremely careful out there. Lots of creeps looking to make a dime off the shortage & ya never know what you're going to get. Sincerely, Mom.