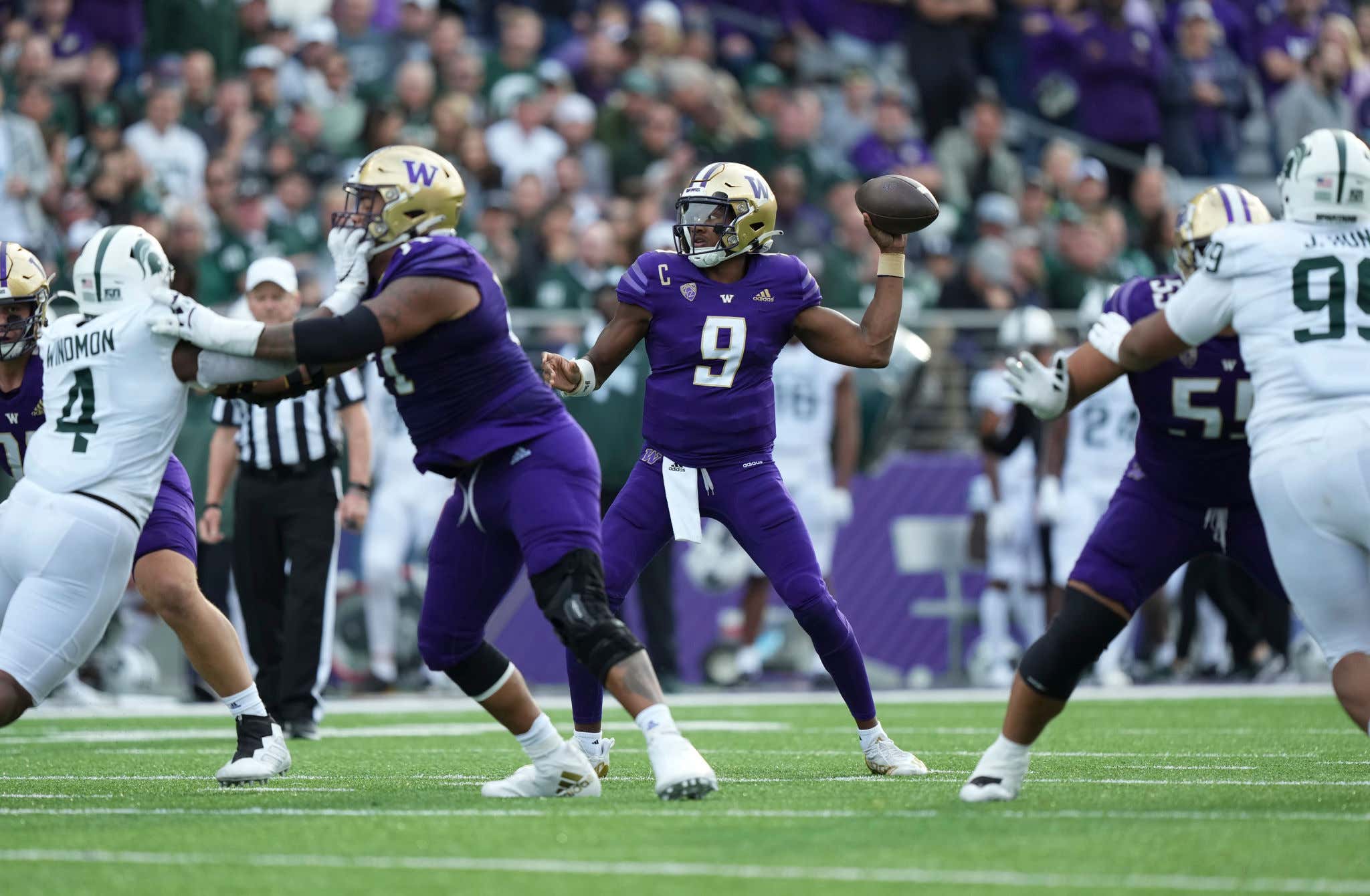 Shout out to RGIII for his willingness to go anywhere and everywhere his beautiful broadcasting mind takes him, but also, let's take a moment to appreciate Washington Huskies quarterback Michael Penix Jr. beyond the obvious joke potential that lies within his surname.

Most of us know the concept of big dick energy, do we not? Basically you're a smooth operator, are seemingly unbothered by the opinions of others and carry yourself with the composure and confidence that suggests…well you can fill in the blanks from there. Let's not belabor the point.

Onward to Penix's performance against 11th-ranked Michigan State. In the first half alone, he completed 18 of 24 passes to nine different receivers for 278 yards and three scores. All of his touchdown tosses were impressive. Tight-window slant in the red area…LASER to the back shoulder…insane pump-fake and a DART right before the second-quarter horn:

The man was DEALING and deserves some respect on his awesome name!! Big Penix Energy indeed.

On the Huskies' first possession of the third quarter, Penix whipped out yet another excellent ball and found Ja'Lynn Polk for a 53-yard TD — their third scoring connection of the contest.

Washington's coaching staff did all they could to blow this game and at the very least let the Spartans backdoor cover the shit out of the Huskies, who were favored by -3.5 before kickoff. That included some mindless, stupid incompletions from Penix to deflate his final numbers to 24-for-40 for 397 yards and four TDs. He was also looking banged-up and had to be stretched on the sidelines as he dealt withe some sort of leg issue. That's more of a red flag for Penix than it would be for most other players.

Injuries have derailed Penix's college football career, to the point where he's never played more than six games in a single season. He began his journey at Indiana in 2018. A gridiron powerhouse the Hoosiers are not. That didn't stop him from going scorched earth on Ohio State back in 2020, when he threw for 491 yards and five TDs in a seven-point loss on the road.

Unfortunately, Penix tore his ACL in his next start, and was rusty as hell last year, leading to his transfer to Washington. Current Huskies coach Kalen DeBoer was Indiana's QB coach and offensive coordinator in 2019, and what a fruitful reunion it's been between for Penix thus far.

That flash of brilliance against Ohio State made me believe in Penix's potential as an NFL Draft prospect. He just hasn't been able to stay healthy. Welp, here he was on Saturday, home facing the Spartans, and here he was once again DESTROYING a hyped up Big Ten adversary. I think it's a great story beyond the name.

Big. Penix. Energy. LFG. Praying this guy has good health for the whole year. If anyone deserves it, it's him.

Penix's highlights from Ohio State in 2020 below