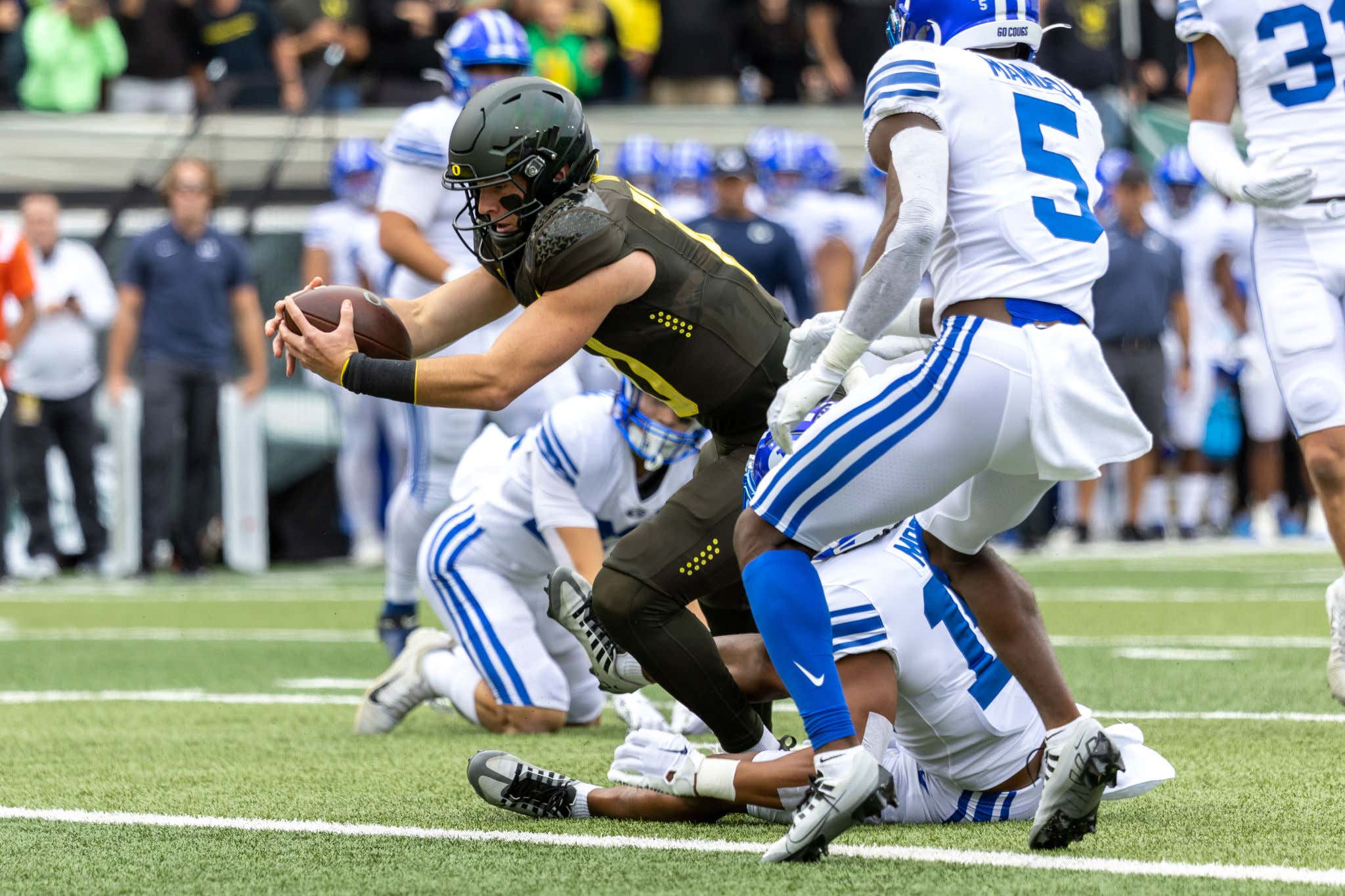 Unless you have a pathological penchant for seeing the best in people or cherish severe love-hate parasocial relationships, any take you have about Oregon quarterback Bo Nix should be a measured one. Hence the "MAY" in the first part of that headline.

Was the relatively declining state of Auburn's football program to blame for Nix's inconsistent, often bad performance during his time with the Tigers? Was it the pressure of being an in-state, highly touted recruit tasked with carrying Auburn to the top of the SEC? Is Nix simply just too much of a human roller coaster to ever be reliable? It's hard to get a grip on just what the young man's actual deal is.

But at least for Saturday's 41-20 romp over BYU, Nix was in command and made some incredible plays against the Cougars. We know he has that dual-threat ability, evident in his three rushing TDs on the afternoon:

I was more impressed with the arm talent Nix flashed in going 13-of-18 passing for 222 yards and two more scores. The absolute rocket he unleashed here that traveled some 60 yards in the air proved to be a pivotal turning point in Oregon's favor:

Then a straight-up seed alert up the seam here right before halftime:

So…full disclosure, I've always suspected Nix's trials and tribulations at Auburn were largely not his fault. So much so that I thought he'd show out well in the Ducks' 2022 season opener — even against Georgia's defense. Why? Well, because the Bulldogs lost so many key defenders to the NFL Draft. What happened instead was the defending national champs overwhelmed Nix and Oregon 49-3.

I know BYU was just coming off a taxing overtime win over Baylor last week. I don't care. Baylor was ranked ninth going into that game! In that context in particular, I'm baffled by the implications of how soundly the Ducks crushed the Cougars. Nix's even-keeled consistency is surprise enough.

The main implication is just how damn good Georgia is.

Elsewhere today, the Bulldogs made easy work of another highly touted QB in Spencer Rattler and South Carolina with a 48-7 rout. Georgia's own field general, Stetson Bennett, has valmorphanized from game manager to playmaking stud before our very eyes, elevating the Bulldogs' ceiling to a whole other level.

Daisy chaining games together can be irresponsible and misleading. In this instance, I don't believe it is.

The fact that Georgia isn't a unanimous No. 1 team in the country, and actually trails Alabama in the Coaches Poll after the Crimson Tide almost lost to Texas even with Quinn Ewers leaving early due to injury blows my mind.

Do all the coaches fucking despise Kirby Smart? Is it a reverence for Nick Saban type of situation? WTF? Georgia is wayyyyyy better than everyone else. That is the take until further notice. THE END.