Gavi is one of the biggest up and coming stars in soccer. Dude is going to play in a World Cup at 18, got a massive extension from Barcelona and more importantly has girls doing this at autograph signings. Must be nice. Can't imagine just sitting there signing my name only to have this chick not so slyly throw a number at me. Then again, I don't have a contract with a 1 BILLION Euro release clause:

Gavi's release clause will rise to €1 billion as part of the deal, the same amount as the clauses written into Pedri, Ansu Fati, Ronald Araujo and Ferran Torres' contracts.

Pretty important player! But this is just smart by the girl. Get in early. Gavi is 18, you need to be the first girlfriend. Don't let him know how awesome his life could be. Then immediately keep him away from Pique who will tell him dumping Shakira is smart. It's Shakira. She's elite. I digress though. This is smart because if you can rope in Gavi early, you have that on your resume. It's like when everyone thought working for Enterprise Rent-A-Car made sense. Great management training program, etc. She gets a star athlete in Spain on her resume.

She also perfected the 'we're a couple and in love' pose 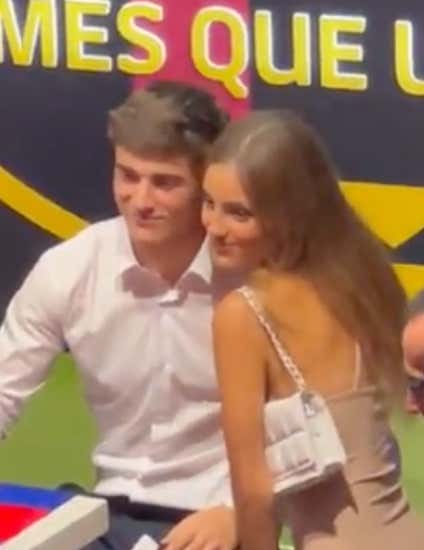 Cheek to cheek. Vet of the game.