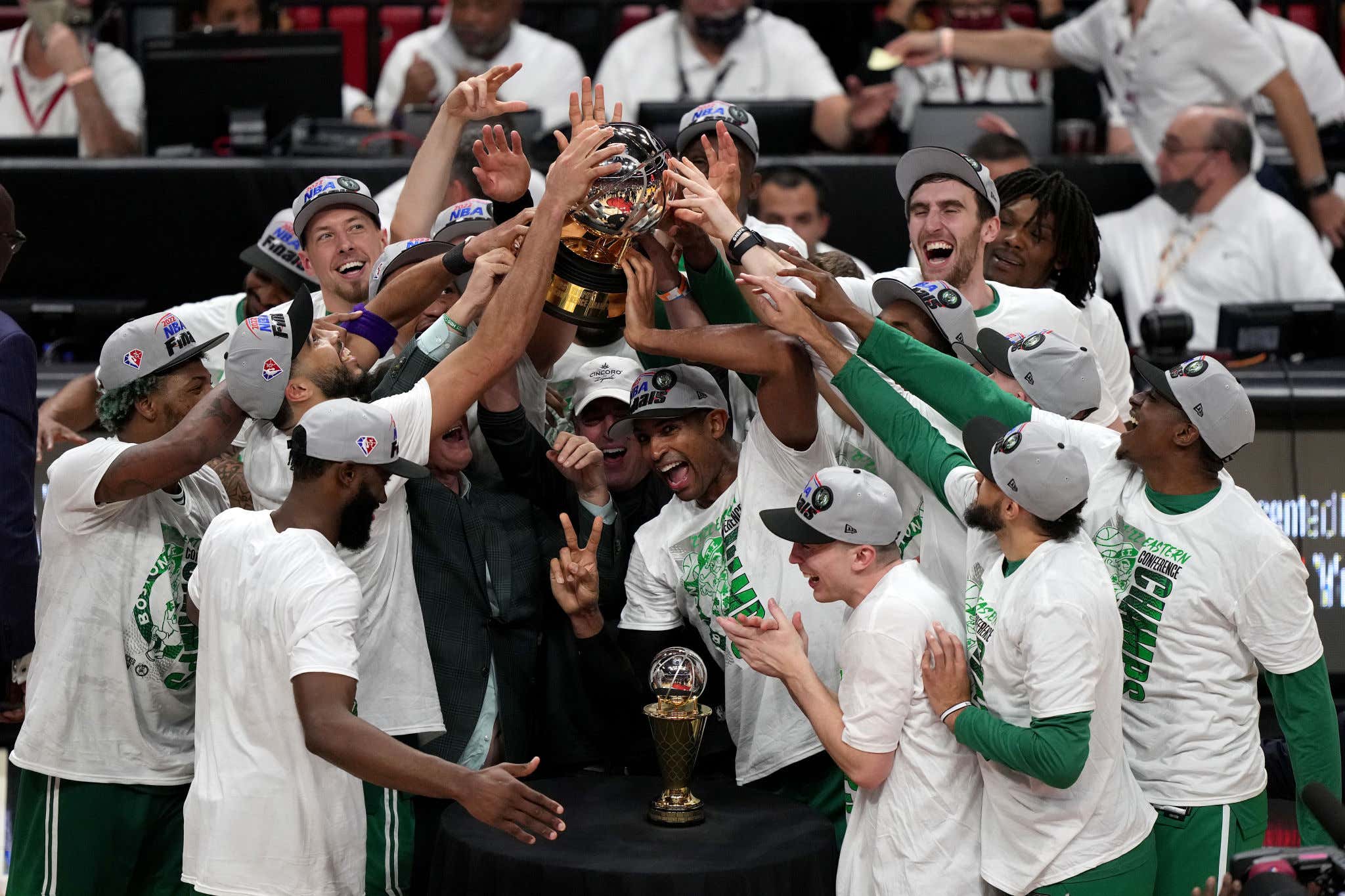 Can you feel it? We're getting closer. The calendar reads September 16th which means we're officially under two weeks until Celts Media Day and training camp opens. It feels like the NBA Finals were both 2 seconds ago and 5,000 years ago. I don't really know how to explain that, but that's how my brain and my heart feel. I think it's a combination of sadness and frustration of how last season ended combined with the excitement and anticipation of the 2022-23 season is what's messing me up. I thought after so much time had passed since mid June that I would be emotionally ready, but I'm not quite there yet. I still trigger myself doing random shit around the house by thinking about Game 4. I expect that to exist for the rest of my life, so there's no point in fighting it.

It goes without saying that this is a pretty massive season. That's what happens when you finally break through and get over the ECF hump, only to fall two wins short of an NBA title. For pretty much the entire Jaylen/Tatum era, the question was could they ever break through? There were doubts if this was the right mix, if guys should be split up or traded. The 2022 season answered that question, we now know this is the right mix. We know they have the talent to reach the top of the mountain, but with that comes legit expectations. It's now a title or bust season. It felt very weird for me to type that sentence because it hasn't really been that way during this era. They are the Vegas favorites to win the whole thing and win the most games in the league. It's both incredible and terrifying all at the same time. Finally, the rest of the world views this team like some of us have since the beginning.

So while I begin to prepare for one of the most important seasons of my lifetime, I figured I would talk about some of the things that worry me most. It's not all rainbows and butterflies, there are things that do keep me up at night outside of reliving the times when Steph Curry literally ripped my heart out of my chest. Maybe you feel the same way with some of these, but I've found it best to talk things through together so let's dive in.

It's not uncommon that you see a team lose in the NBA Finals and then make it back/win the whole thing. In recent history, we've seen the

do just that. They fell short in the Finals the year before and then avenged that loss with a title of their own. I think on some level most of us think the Celts will use the pain of being so close and coming up short as a motivating factor for this upcoming season. That's certainly the optimistic look at it for sure.

But it's certainly no guarantee. It took the Mavs 5 seasons to get back to the NBA Finals after losing the 2006 series. The 2012 Thunder never got back. The Suns were once again one of the most dominant teams in the NBA this past season, and they lost in the 2nd round. You just never know.

So here's my fear when it comes to the 2022-23 Celtics. My fear is that they forget that 2022-23 is not 2021-22. It doesn't matter at all what you did the year before, it guarantees nothing moving forward. My concern is that there will be some sort of Finals hangover. My heart wants them to go the motivation route, but I also know this is a team that sometimes struggles with success. They take their foot off the gas. The regular season is very important for them, so my hope is they don't think they can just show up and dominate or only have to care until the Spring.

I probably think about this no fewer than 500 times a day. It might be one of the biggest X factors of the entire season. There's no question the 2021-22 season from Al Horford was the stuff of legends. He basically looked 26 years old throughout the entire year and was without a doubt one of their best postseason performers. He's so important to what they do, getting the best version of Al is very important.

We saw what a dominant force Rob is when he's healthy and on the floor. Shit, what he was able to do on one leg during the postseason run was incredible. What he brings on BOTH ends of the floor is the backbone of this team. When he's on the floor, this team is dominant. Full stop.

So how does Ime keep both right? We know Al won't play back to backs and I imagine they'll load manage Rob, but that brings another fear. Does this team have the front court depth to do that over the course of the season? Especially after losing Gallo?

Along those same lines, of course I'm nervous about Malcolm Brogdon's health. When this is your games played over the last few years

how could you not be? Everything about him as a player is a perfect fit for how Ime wants to play. I think he'll slide in seamlessly both on and off ball. Maybe this is just some PTSD from Gallo's injury, but I'm nervous. I can't help it. Even though I would hope in a reserve role while not playing so many minutes that it'll help, who the fuck knows.

I have no doubt that Jaylen is doing everything in his power to improve his game this summer. It's what he does. Anyone who watched the playoffs knows a part of that has to be his ball handling. It was.....not great.

My fear isn't so much about what Jaylen may or may not have done this summer to improve, but more the book might be out in terms of how to defend him. The NBA like every other sport is a copycat league. When something is proved to be successful in terms of stopping a player, other teams copy it.

We saw Jaylen really struggle with ball pressure, especially when it forced him left. If I had to guess, I would imagine teams will use the same sort of approach that MIL/MIA/GS used when it comes to guarding Jaylen. It'll be up to him to show he's ready for it.

One of the more frustrating part of last season was how dogshit this team was in the clutch. Arguably the worst 4th quarter team in the league for like 85% of the season. In the playoffs, we saw more late game struggles. Especially in the NBA Finals which isn't exactly what we were looking for.

The Celts were 3-9 in games decided by 3 points or less last year. That was the 2nd most losses in the ENTIRE conference, trailing only the 3-14 Pacers. In "clutch" games, the Celts had a 13-22 record which last time I checked isn't good. Even if you start things when they turned around their season in late January, they were 4-5 with an 87.8 Ortg. They had a -12 net rating in the clutch while they were literally the best team in basketball over the final four months. It stayed an issue for the entire year.

So yeah, I'll always be concerned about what this team looks like at the end of close games, especially offensively. All it did was help cost them a title. That seems significant.

Admittedly, this one might be premature. This fear is only if we don't see Grant and the team come to an extension before the season starts. That can usually go one of two ways, either it motivates him to have a career year in a contract season which would be awesome, or it fucks with his head and he struggles. He starts pressing when things may not go his way and it snowballs. You see guys force things and try to do too much because they're playing for that big free agent payday.

How They Handle Being The Hunted

There's a big difference in the NBA from being the "hunter" to becoming the "hunted". When you have the type of expectations the Celts are entering the season with, life is different for you. Every single night you are getting the max effort from your opponent. In a sense, you have a target on your back and it's not always smooth sailing. They want to show why you aren't as good as the hype and if you aren't ready for it, things can go south quick.

We all remember 2018-19 right? The season from hell? All the talent in the world, all the expectations of being a title contending team, and that group couldn't handle it. While I don't think this group has the same issues that roster did, we don't know how this current roster will deal with these new and legitimate expectations. They aren't going to sneak up on anybody. They won't have the luxury of having a game where maybe you don't try all the time. When you're good, you have to bring it at all times because you know your opponent will.

In a perfect world, all these worries will be for nothing. That's the hope at least. So far, this is where my brain is at as we prep for camp. Does anything else concern you or have you nervous? Let's hear it.