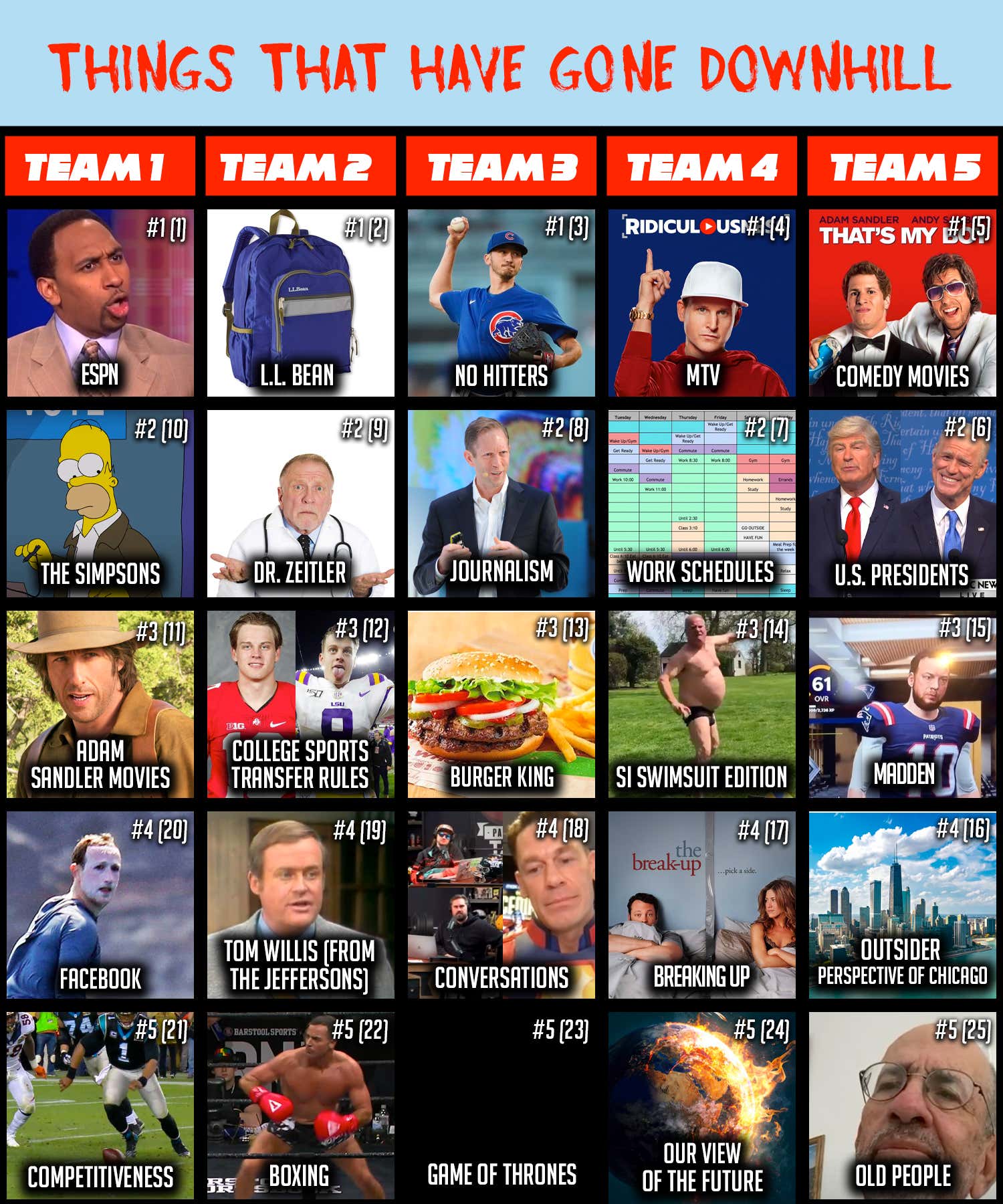 Mr. Portnoy makes his highly anticipated return in the Draft of Things That Have Gone Downhill. Pretty self explanatory, no categories the Drafters must hit. Just their top five. So let's get into the grades.

ESPN is a very chalky, but accurate and appropriate #1 overall pick. From watching re-run after re-run fo SportsCenter, I agree with this drafter in that I never really watch it outside of live sports and the once every few months 30 for 30. The Simpsons is still funny, but nowhere near it's peak which is far gone. Good 2nd Rounder. Adam Sandler movies have been downhill for a very long time and I think a lot of that is just aging out of those movies PG-13 demographic. Also with Uncut Gems he's proved that he is a bit more versatile then we all thought. Facebook is a good 4th rounder as the social media ecosystem has just become so much more watered down and even though they own Instagram, there are other options. Competitiveness is a pick I can live with in the 5th round as sports have changed to focus more on player safety.

LL Bean is a decent first round choice as I haven't seen one of those backpacks in years. Dr. Zeitler is an odd pick and you probably have no idea who he even is. But the argument is bulletproof. The fact you used to get unlimited time with him and now you've got a moving target clock each time you go in is complete B.S. Yeah, he's no longer a doctor and not living anymore, but service had gone way downhill prior to that. The College Transfer rules are the worst and college sports in general is just a business masquerading as not a business. Tom Willis, the english guy from The Jeffersons, didn't have much of an argument because this drafter doesn't like another english guy, Richard Quest because he has no bedside manner. He just reports the facts. Disgusting. Boxing is an outstanding pick and could a 1st Rounder. While Rough N Rowdy is great, the Gypsy King has some charisma, there really isn't a big boxer that everyone is clamoring to see. Floyd Mayweather? The guy is like 140 lbs! I'm talking heavyweights like Muhammad Ali, Joe Frazier, Mike Tyson, George Foreman. We don't really see guys like that outside of the Tyson Fury and he's just got so much size it's hard to compare to a shredded, strong, knockout puncher of the past.

I understand the No Hitters choice in the 1st Round, but it was clearly a bit too early. Poor value that early and very specific. Journalism I think is a good one as there is no doubt I have several typos in this blog alone! Burger King is a polarizing pick because some people just do not fuck with Burger King at all. I am a fan and they just have no evolved in the ways that Wendy's or McDonald's has, so they've been left behind. Conversations is a good pick and your weekly screen time would likely confirm that. I am not a Game of Thrones watcher, so can't really comment on the final pick.

MTV is an interesting one. They seemingly struck gold with The Real World and reality TV and gotten away from music, now it's just Ridiculousness on top of Ridiculousness. Big time downhill. This could've gone #2 overall in my opinion. Work schedules is also a great answer. While I love my job now, at prior companies, answer emails at 10pm are never ideal. I would've loved to be not reachable. Sports Illustrated Swimsuit issue was really knocked down a few pegs with the popularization of porn, instagram, and only fans. Breaking up is a good pick because like this drafter said, you can do it over text and it's far less personal. Give me the knock down, drag out 5 hour tear fest. Our view of the future is certainly jaded

Comedy movies are actually something I think have gotten better, especially with Judd Apatow around. US Presidents is a fair argument but before the 9-5 workday is tough. Madden I get and is a popular thing to complain about online. Chicago is one where it feels pretty regional and specific, but I can understand not wanting all of Chicago wanting to be lumped into the bad part. Old people I think are just becoming more on our radar, so not sure if they're actually getting worse.

Who do you have winning this draft?

And be sure to watch the full episode if you haven't already, and subscribe to the Barstool Chicago YouTube channel: