Jerry Jones has got to be the funniest guy in sports right now. He still thinks being the owner, president, GM, and overlord of the Dallas Cowboys is working, despite it most definitely not working for the last 25 or so odd years. But now he has added "team doctor" to his resume and it's just delightful.

Immediately after the game on Sunday, Jerry consulted with the Cowboy Hat Doctor, who without a doubt went to Dr. Phil College, 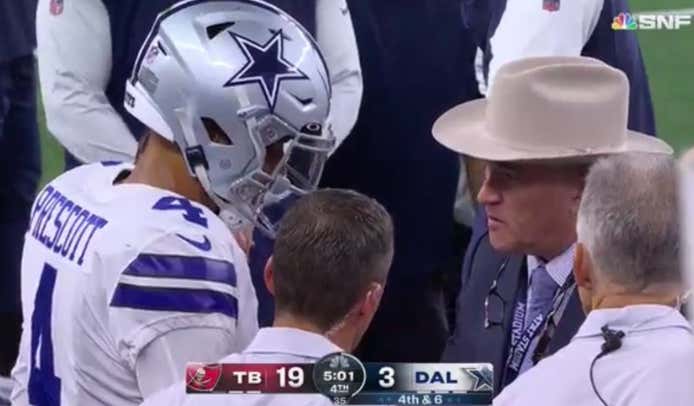 and decided Dak needs surgery. So Dak had surgery. I'm now beginning to think he should have seen a real doctor before making this decision.

But it turns out the surgery out back in the woodshed went great, because Juuurrrry is now saying Dak could be back in the next 4 weeks!

So either Jerry became a doctor, or he's spatting bullshit to the fans to keep them optimistic, while simultaneously putting all sorts of pressure on Dak to rush back before he's ready. A win-win if I've ever seen one!

Could this be the season the Cowboys finish their tailspin? All the signs are there- terrible head coach, injury at QB, a team built around a RB with a shoddy OL, and an old pervert overseeing the entire thing in the front office. Here's to hoping it's the worse Cowboys season yet!