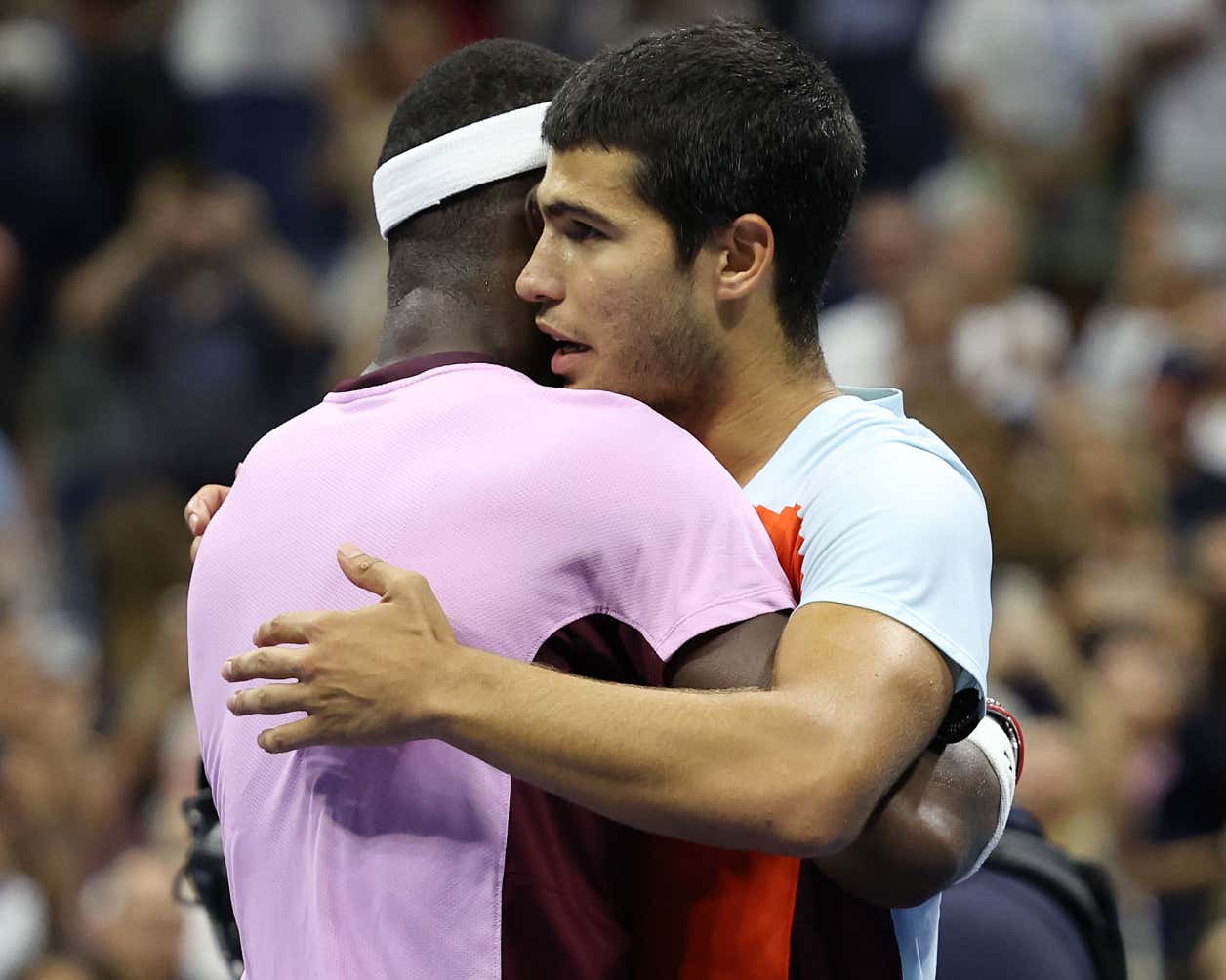 19 year old Carlos Alcaraz and Frances Tiafoe just went to war for five sets in the men's semifinal of the US Open. Yet another incredible match that the US Open has delivered. Tiafoe and Alcaraz have been the stars on the mens side and who woulda thought those two facing off would give us box office entertainment? This match was fantastic.

Things started off absolutely bonkers from the jump. Almost every single match Carlos will do something that makes you drop your jaw and he did just that winning this point and forcing the early tiebreak.

Just ridiculous on all levels. He really may be the fastest tennis player in the sport's history. You can never believe you've won a point against this freak until the bounce bounces twice. Surprisingly, Tiafoe squeaked out the opening tiebreak thanks to an Alcaraz double fault. The Spaniard did battle back from 6-3 down in the breaker to level it, but he couldn't finish it off. Tiafoe had to win the first set to have a chance and he accomplished that task. Game on.

That's when Alcaraz turned it up to 11.

I've watched this next point back a dozen or so times and still don't understand how the kid won it. He's just on a different level. Like I said, you have truly never won a point until the ball bounces twice.

It was pretty straight forward for a little while after that with Alcaraz grabbing a commanding two sets to one lead, including a 6-1 thrashing in the 3rd. Up a break in the 4th this thing appeared all but over until Tiafoe rode the crowd and battled all the way back. He ripped this second serve return to break and sprinted right to the chair.

You wanna see heart? Watch what Tiafoe left out on the court Friday night.

He almost didn't make it to the tiebreak. The American had to pull this miracle out of his ass to save MATCH POINT. At this point I jumped up from my couch.

We went to a fifth set because why not? If Alcaraz plays a match it has to go 5. The over is basically robbery with this guy.

In that final set though he wasn't going to let it slip away.

I know he's 19 years old, but there's no age you should be fit enough to play 13.5 hours of tennis in five days time and look this fresh in the end. How isn't he cramping at all? Tiafoe had his feet kicked up on the couch Wednesday night after his straight sets victory while Alcaraz battled to nearly 3am to beat Sinner. Despite that in the 5th set Carlos had by far the most left in the tank. It's nonsense how good he is. The mental edge he has over everyone is bonkers considering his age. Guy gets broken on his serve and he comes back at you with an avalanche on the returning end. I believe he's playing better tennis than anyone in the world right now. Some will still counter with Novak which is fair, but consistently he's been the best to me and only getting better. Plus they played in Madrid this year and Carlos took it home.

Before I talk more Alcaraz I need to give Tiafoe a ton of credit. That man gave it all tonight as well as in this whole tournament.

He showed up for American mens tennis in a big way. Dude took out Schwartzman, Nadal, and Rublev while only dropping one set in those three matches. He gave the 19 year old phenom all he could handle tonight, but came up just short. He told the crowd he failed them, but that's far from true. Frances Tiafoe got so many eyeballs to tune into this match and entertained them all. My entire Twitter timeline that never talks tennis was watching this match on a Friday night. It was amazing and he should hold his head up very high.

As for Alcaraz, what awaits him? Oh nothing just the US Open title on Sunday and a chance to vault to number one in the world. It's very cool how this has worked out in the rankings between him and Casper Ruud because the winner of Sunday's match will become the top ranked player on Earth. Ruud has enjoyed a breakout year and looked exceptional all tournament. These two actually met during the Miami Open final earlier this year with Alcaraz winning in straights 7-5 6-4. I'm expecting another tight match with the over easily hitting and Alcaraz finding a way to take it home. I know it's the first NFL Sunday of the year, but you might wanna throw this match on a TV around 4:00.