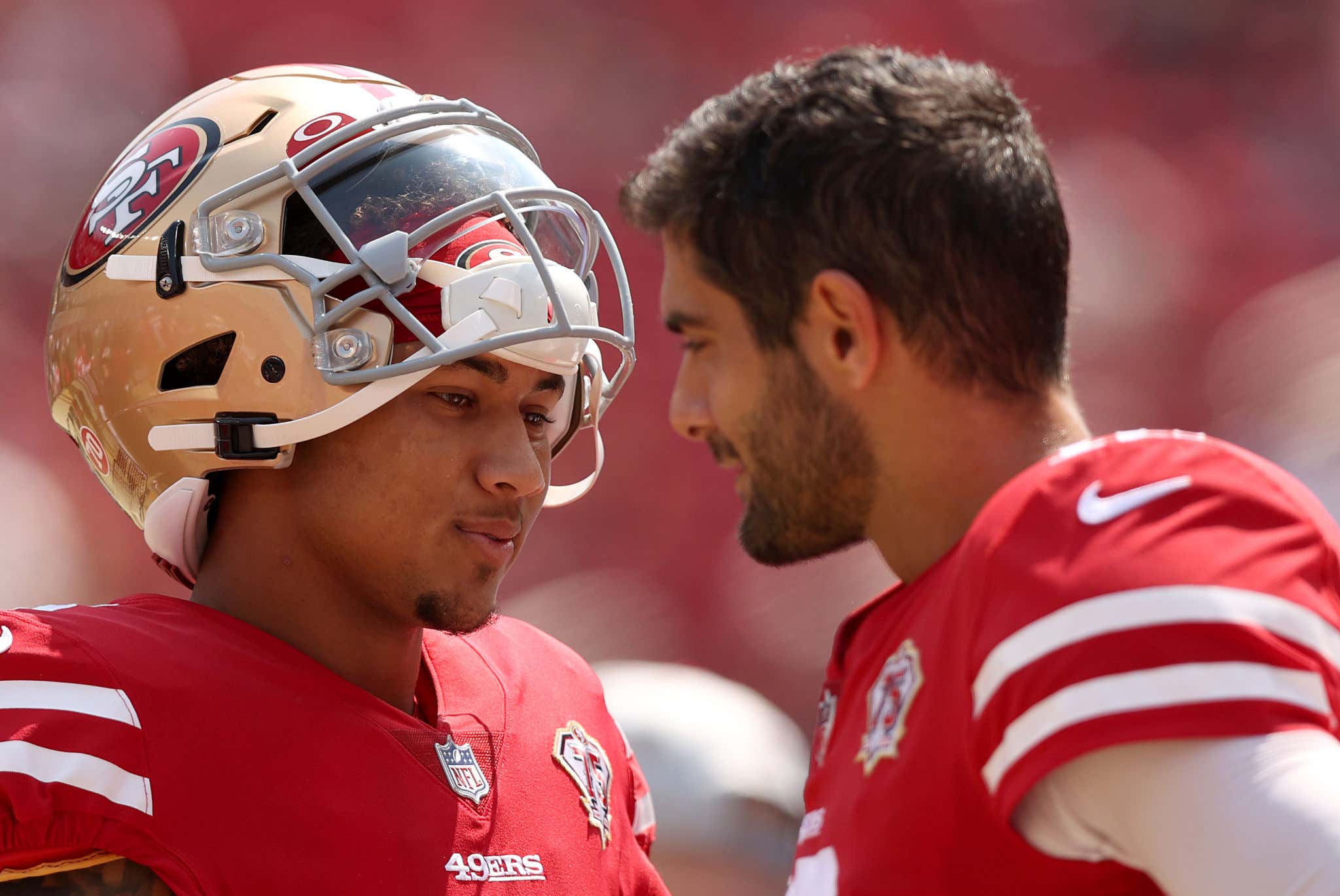 Even in our noisy contemporary world where no take is too hot, no reaction to instant, and no opinion too over the top for polite society, no one can argue that Trey Lance doesn't have the potential to be the franchise quarterback the 49ers hoped he'd be when they spent three first round picks to get him. Of course you don't know until you know. And if he were a publicly traded company, I might not invest all my savings in his future. But I wouldn't mind at all to find out my mutual funds own shares of him.

Then again, as Ned Stark said, "Everything before the word 'but' is bullshit." But … the Niners have given us plenty of reason to think they're not sold on Lance. At least not yet. It's not at all unreasonable to assume that John Lynch and Kyle Shanahan have some reservations. Beginning with the fact they gave Lance a rookie apprenticeship, which is pretty much unheard of in the modern NFL. Then there's the fact they brought Jimmy Garoppolo back, rather than trade him for whatever they could get or just give him his outright release. Which reportedly didn't please Lance in the least:

You'd think that if Lance were living up to expectations, they wouldn't feel the need to have Jimmy G standing over his shoulder in a sideline cap as opposed to, say, Brock Purdy. (Note: What 1990s Chris Berman could've done with a name like that.) If you're truly invested in a guy enough that you spend all that capital to bring him in to replace the quarterback who took you to a Super Bowl and a conference title game, you typically show the confidence to not leave the replaced QB around as an insurance policy. As Captain Ramius put it to the crew of the Red October, "When Cortez reached the New World, he burned his ships. So that his men would be motivated."

Which brings me to the Niners latest vote of lack of confidence. Which in this case, was literally a vote:

It is rare for a quarterback not to be a team captain, with the Seahawks and Browns also not having a quarterback voted captain for this season.

Shanahan explained Lance’s absence as his being a full-time starter for the first time.

A few points about this. First, the reason the Seahawks and Browns didn't give captaincies to their starting quarterbacks is because the latter is suspended for being a serial Cosby, and the former is Geno Smith.

Second, even if you argue that being captain is a meaningless title, then you're arguing against yourself. If it means nothing, why wouldn't Shanahan just throw the guy he's invested so much a bone by slapping the "C" on his shoulder. If for no other reason than it says to the rest of the huddle - as well as the roster - "This is the guy in charge. Follow him." That "C" doesn't just stand for "Captain," it stands for "Cock of the walk."

Third, the fact that Shanahan decided to go with just six members of his Justice League after Lance finished seventh in the balloting is suspect.

Lastly, if it speaks volumes that Shanahan wouldn't put a seventh seat at his table in the Hall of Justice, what does it say that after a year of being on this roster, Lance's teammates had him seventh in voting? With all due respect to the six who made the cut, when your QB1 can't at least make the medal stand, that speaks volumes through a bullhorn.

There was a lot of smoke last year when Tua Tagovailoa didn't get the "C" in Miami, because it matters. And this year he was the Dolphins' leading vote-getter. Mac Jones didn't get it as a rookie because he had the starting job for about 15 minutes. He has it now and will never relinquish it. Lance has been the Niners presumptive franchise player since the moment they drafted him. And the fact his coach and teammates didn't deem him worthy - along with Jimmy G's continued presence on the roster - just adds to the suspicion they simply don't think he's ready to lead them. Stay tuned.