[Source] - That came a few years after the college announced that the coach had agreed to a contract to ‘be a Friar for life.’

The length of the 52-year old Cooley’s extension is unknown but it is believed he signed a 10-year deal in the spring of 2019 after the coach had in-depth talks with the University of Michigan. It’s likely that this new deal pushes his deal back to 10 years.

Alright so I wanted to take a quick break from football, soccer and IG blogs to talk about my first love. College basketball. Some important news that I wanted to blog. So be it. Providence signed Ed Cooley to an extension that's being reported as a lifetime deal. That's smart.

It's opposite of this, which is dumb

It'll always be The Dunk to us. Getting the Cooley news out there helps keep attention off of there. Smart for that reason.

But it's also smart because Cooley is Providence basketball. I know he hasn't made a Final Four and you want more of a run in the Tournament. But he's turned Providence into a consistent program. That's not incredibly easy. It's not like Providence has some historically great history. They have the run in 87 to the Final Four and then again to the Elite Eight in 97. That's it in terms of somewhat recent history. Shit last season was the first Sweet 16 since 97.

I know there were rumors of him potentially leaving for Michigan before Juwan Howard. But Cooley is Providence. He's from there. He's a staple of Big East - both old and new - in coaching. Whether he was an assistant at Boston College or now at Providence he's been in that conference forever.

But here's my ultimate question for any Providence fan who doesn't like the move. Who are you getting that's better? That's ultimately my question when you move on from a guy like Cooley. A guy where he's pretty consistent but you want a little more run in the Tournament. Like I said, it's not like you walk into a place and automatically win at Providence. You have to build that program up and Cooley has done that.

So shout out Cooley. He's a guy I want in the sport. He's hilarious, he speaks his mind and he's not afraid to say something that could cause a headline. He deserves it.

PS: Him coaching in a towel because he ripped his pants will always, ALWAYS, be an all-time moment. 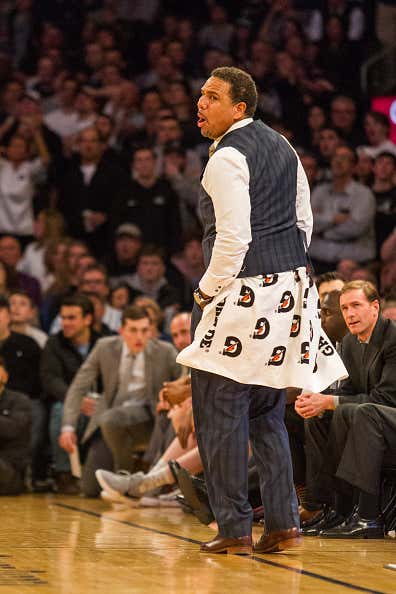