Welcome back to another edition of Blog Wheel.

When I first submitted this blog, I didn't feel like writing an introduction, so I just smashed the keyboard. It looked something like this:

But Nate said that didn't play. He's probably right. I should put a little more effort into my writing. I really do appreciate everyone who responds to my tweet asking for topics every Sunday. I enjoy writing these blogs, and the topics that people come up with are usually pretty good. The only one that really sucked this week was this one.

I'm not sure what that means. Types of butts? Like fat butts, skinny butts, fake butts, etc.? Not sure. It won't be making the wheel this week.

Here are the topics that did make it:

- Civil War between different parts of the United States

- Tinder but for adopting kids (I liked this one a lot)

- Surviving a day at Barstool Sports

- Why John Rich has to outsource his content every week

Here is the spin.

I love it. I haven't been feeling that creative lately, so maybe an inside Barstool blog will help me get back on track.

Barstool is an incredibly fun place to work, and I love coming here every day. But a common misconception is that everything is all fun and games around here. It's actually a very competitive work environment. Not that everyone isn't friendly, but everyone is basically on their own. There will always be teams of 2-3 who make a lot of content together. And of course, podcasts & shows require multiple people to record, produce, promote, etc. But when you get hired on at Barstool, there is nobody that holds your hand. Nobody is going to tell you what to do, how often you should be in the office, or how much you should be posting. You'll be given tons of random advice, but you're pretty much on your own from the moment you start. At least I was. Nobody even gave me a desk. I had to seek out an empty desk of someone who doesn't normally work out of the office (Trent), then hope when he comes back that he's cool about it (he was).

To be honest, I don't know the best way to survive at Barstool Sports. I have no idea if the company is happy with what I'm doing or not. Dave could come in tomorrow and tell me I fucking suck, and I need to start putting out more content. Or he could tell me I'm doing amazing and to keep up the good work. Both of those things are equally likely to happen in my mind.

Well… I guess the idea of Dave showering me with compliments is pretty farfetched. I'm way more likely to get ripped. My point is I have no idea how the higher ups think I'm doing. More than likely they don't think about me at all.

This blog was originally supposed to be, "Surviving a Day at Barstool Sports", but surviving a day is easy. Just walk into the office, find a seat, and click around on your computer for a while. Nobody gives a fuck what you're doing on a daily basis. It's easy to survive for a single day. I decided to broaden the topic by calling it, "Surviving at Barstool Sports"

Again, I am absolutely not the person to be giving this advice. So take everything I say with a grain of salt. But here are some things I've learned about how to survive at Barstool. In case any of my co-workers are reading this, it's all jokes.

The most successful people in the company are never in the office. If there is a team you are even slightly affiliated with, and they are playing a game anywhere in the country, expense a plane ticket and attend the game in person. But you can't just go to the game and do nothing. Make sure you eat a giant meal at the most popular restaurant in town and post a picture of it on Twitter.

Kayce Smith got pregnant the other week and her stock has skyrocketed. It happened weeks ago, and there are still new people who come up to congratulate her on a daily basis. She wrote a blog announcing her pregnancy and it was the #1 blog on the site for a full weekend. I sit across from her, and every morning she brings in a fruit the size of her baby fetus and we split it for lunch.

They proofread all of the blogs, so make sure that you have a good relationship with them. They are the 3 best & coolest and definitely not bald people at Barstool Sports and it's not even close.

There's nothing Stoolies hate more than when when bloggers try. I tried when I wrote a blog about Winnie the Pooh the other day and it was not well received (to be fair it did suck). But my point stands - if you have to try to create your content, then it will be lame. It should all happen organically and without a hint of thought.

Not in a public way. You don't want to post on Reddit as yourself. What you need are multiple burner accounts that you can use to gas yourself up, while at the same time tearing down people you see as direct competition. Like the time I posted that picture of Marty out with Ria in public. I had the foresight to know I would be "winning" Barstool Idol a few months later. Now I'm on the fast track to becoming Barstool's next gambling personality. 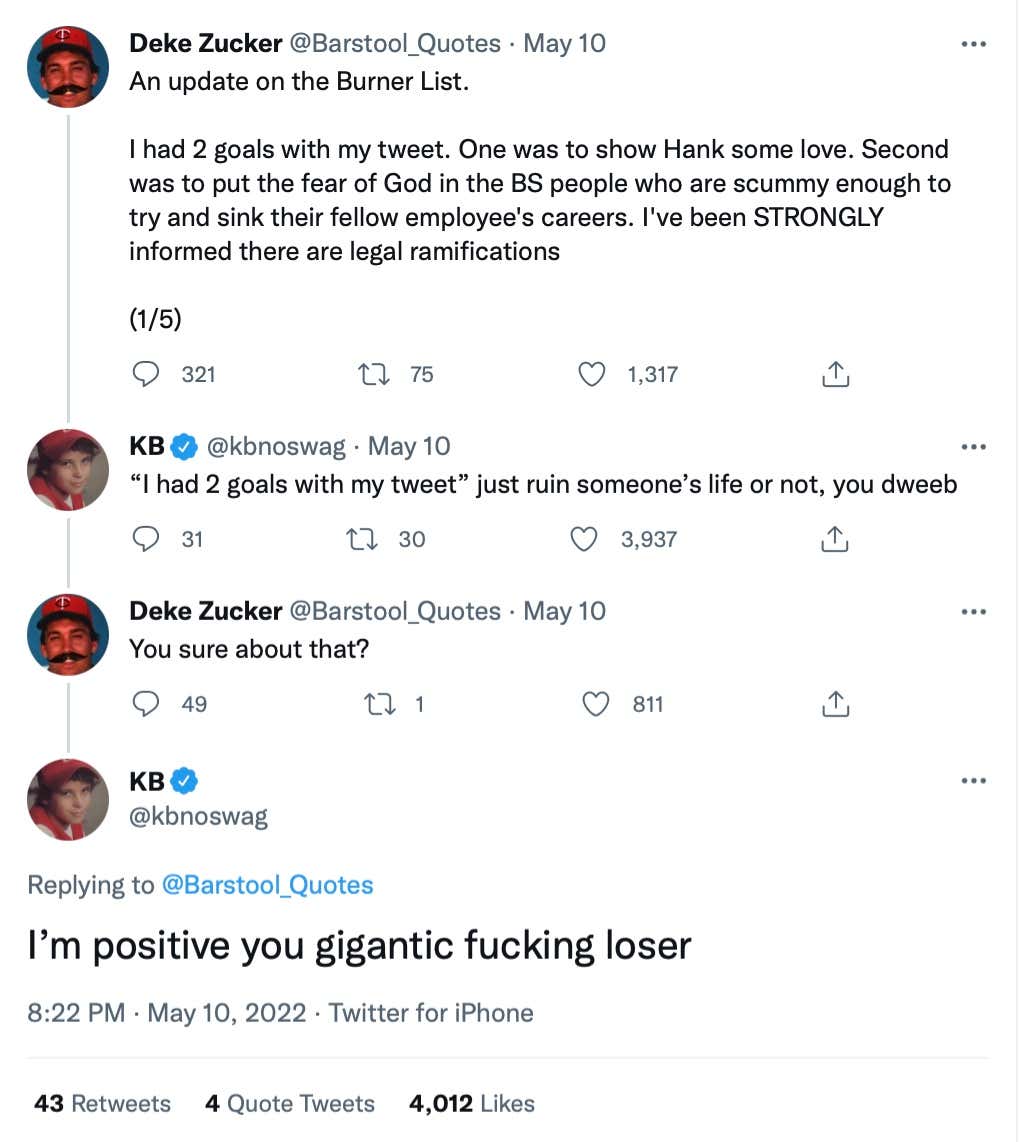 Get on the Balls Beachwear Schedule

If your back is really against the wall, and you need to make something happen, shitting your pants is a tried and true way of securing your job for at least another year. Jerry did this the other day and he lit the internet on fire. He set a pretty high bar though. It was a lot of shit, and he showed it. The next person to shit their pants is going to have to have a serious blowout. If I ever shit my pants I'm going live immediately.

This should go without saying, but it is clearly the most important thing you need to do to survive. I have a bit of a hard time with this. I hate inserting myself into things, but I'm starting to get better. Every day, people will walk around the office asking us random questions for TikTok or Instagram reels. Typically, the more popular bloggers are the ones who get asked the questions (naturally). I do not get asked for my take very often. However, I have learned a trick that will help you get picked more. Prolonged eye contact. When you see Colleen walking around the office making TikTok's, drop everything you are doing and stare at her face. Do not under any circumstances look away from her. She will notice you eventually. You're going to make her feel so uncomfortable that she will ask you for your take just so you stop staring. She might not end up using your video, but at least you'll get a shot. Who knows, maybe you'll surprise them and say something funny.

Another way to get involved in content is by walking past The Yak while they're recording. Sometimes they call people in to be on the show. If you can't get them to call you in, then start mixing it up a bit. Maybe try wearing a festive hat, or a funny outfit. The Yak is a smart show, but they are simple minded people. If you walk by in non-regular clothing, they won't be able to resist calling you in.

If you're looking for an easier way in, just start gambling. Tag @PicksCentral incessantly until you strong arm them into having you on their show. Just make sure you know something about sports before you go on. I made the mistake of joining the show during baseball season, and I could not have had less to contribute to the conversation.

If none of those options work, you can try being more electric, or having a weird brain. Barstool Sports is built on a foundation of electric personalities and weird brains. If you're just a regular guy, you're never going to survive at this company.

And if you don't have an electric personality or a weird brain, just get drunk and DM Dave Portnoy to ask if you can produce Barstool's longest running show. Maybe he'll say yes.