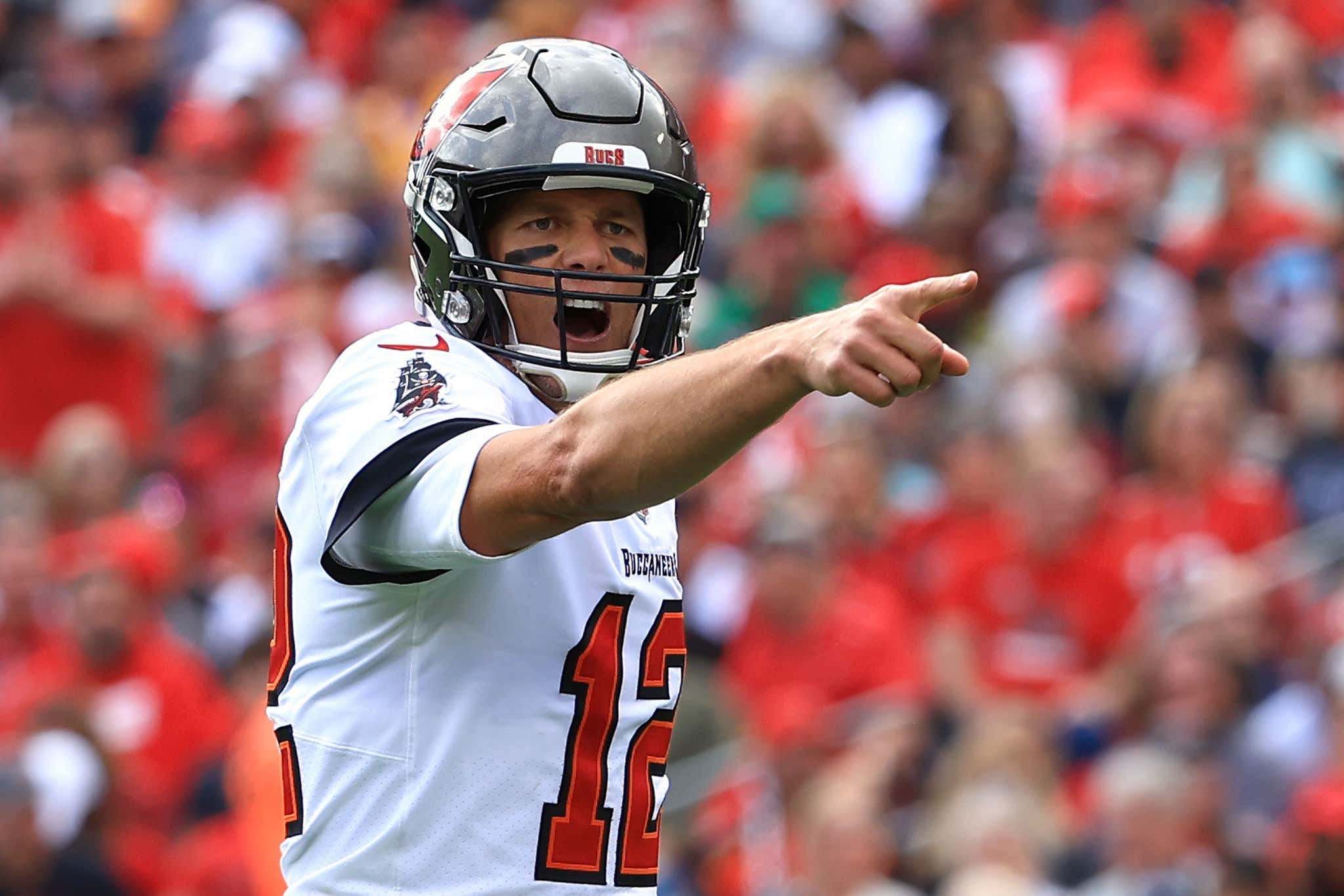 It's that time of year, folks. NFL playoff predictions!!

Went with something a little different this year in determining who will qualify for the postseason because first of all, a vast majority of us are wrong as fuck on these types of annual projections, and two, there is a general rule that six new teams that weren't in the previous season wind up making it in.

So what did I do here? To determine the top seven seeds in each conference, I concocted an oversimplified, crude sort of formula that factors in each contender's quarterback play, offensive weapons, coaching staff and overall defense. I ranked them in order from the teams in each conference I deemed "playoff-worthy" (can't wait to look back on this and see who I missed), and added up their totals.

You could weight any of those factors differently based on what you value (hence my tiebreaker rule of QB/weapons combo), or loop in strength of schedule, but I side hustled and went through each team's 17-game schedule just to see if I felt way off on any of them. Felt like I was more or less within a game or two anyway. So WTF ever, right?

I'll post the results below, make bold claims as to how the ensuing rounds would play out, declare a Super Bowl winner, and then explain myself further via some text and TikTok, which I'm still a novice at so just cool your jet-fuel rage. 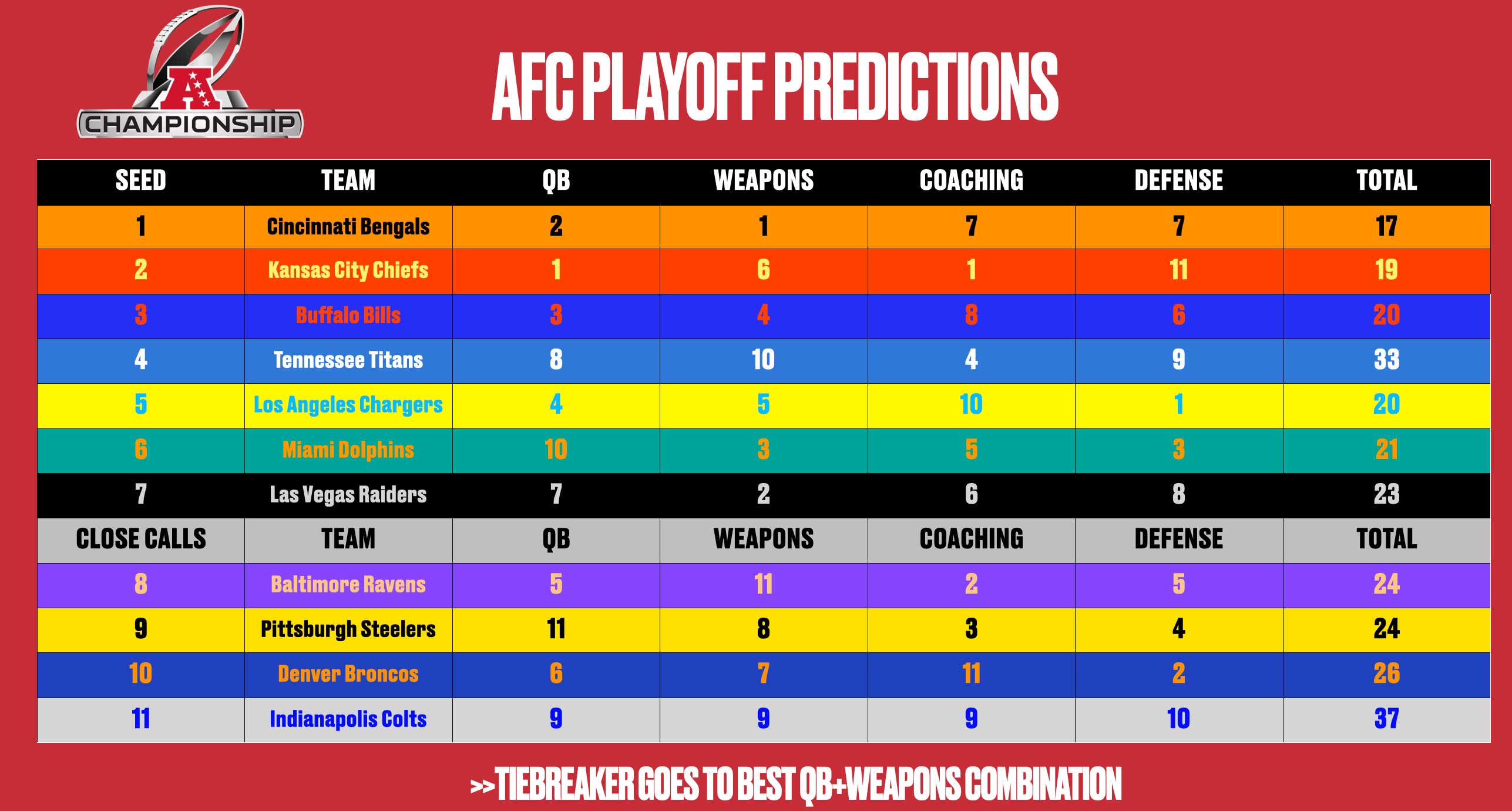 I obviously stuck with a specific, rigid structure to make these predictions. Look how damn close that Wild Card race is bound to be. Leaving the Baltimore "Revenge Tour" Ravens out of the AFC picture, along with Pittsburgh's Mike "Never Had a Losing Season" Tomlin and Denver's Russell "Broncos Country, Let's Ride" Wilson…all those decisions were agonizing. As an AFC guy, I know better than to ever doubt the Ravens and Steelers.

You might be angry or think I'm close-minded since I picked the exact same division winners as last year. First of all, if memory serves, at least four division champions have successfully repeated each season since 2015. We shall see if 2022 is an outlier/exception. Going only off of the scores I gave, however, you can see that several of the division races figure to be tight.

I'll have a betting bargain list out for futures bets, but at Barstool Sportsbook, if you want to take a shot on a non-favorite to win their division in the AFC, I really like the Chargers (+225) or Raiders (+650) over the Chiefs (+170) and Broncos (+270) in terms of value for the AFC West.

My belief in Mike McDaniel is real, so whatever your feelings are on Tua Tagovailoa, Miami has a loaded team around him with Tyreek Hill and Jaylen Waddle leading the receiving corps. Combine that with a defense that's still in the same system as last year, and I think the Dolphins (+475) are the team who could really scare Buffalo in the AFC East.

Check out my AFC South breakdown below.

No matter who comes out of the AFC West, I'm bullish on this Chargers defense being absolutely filthy. J.C. Jackson and Derwin James are studs in the backfield. Sebastian Joseph-Day comes over from the Rams with a great feel for coach Brandon Staley's scheme, which was a total sieve versus the run in 2021. Oh, and Khalil Mack is now opposite Joey Bosa on the edge. Talk about reinforcements. Give Justin Herbert that kind of support on the other side of the ball? I don't care how tough the West is. That should only serve the Chargers well as they brace for the postseason gauntlet. 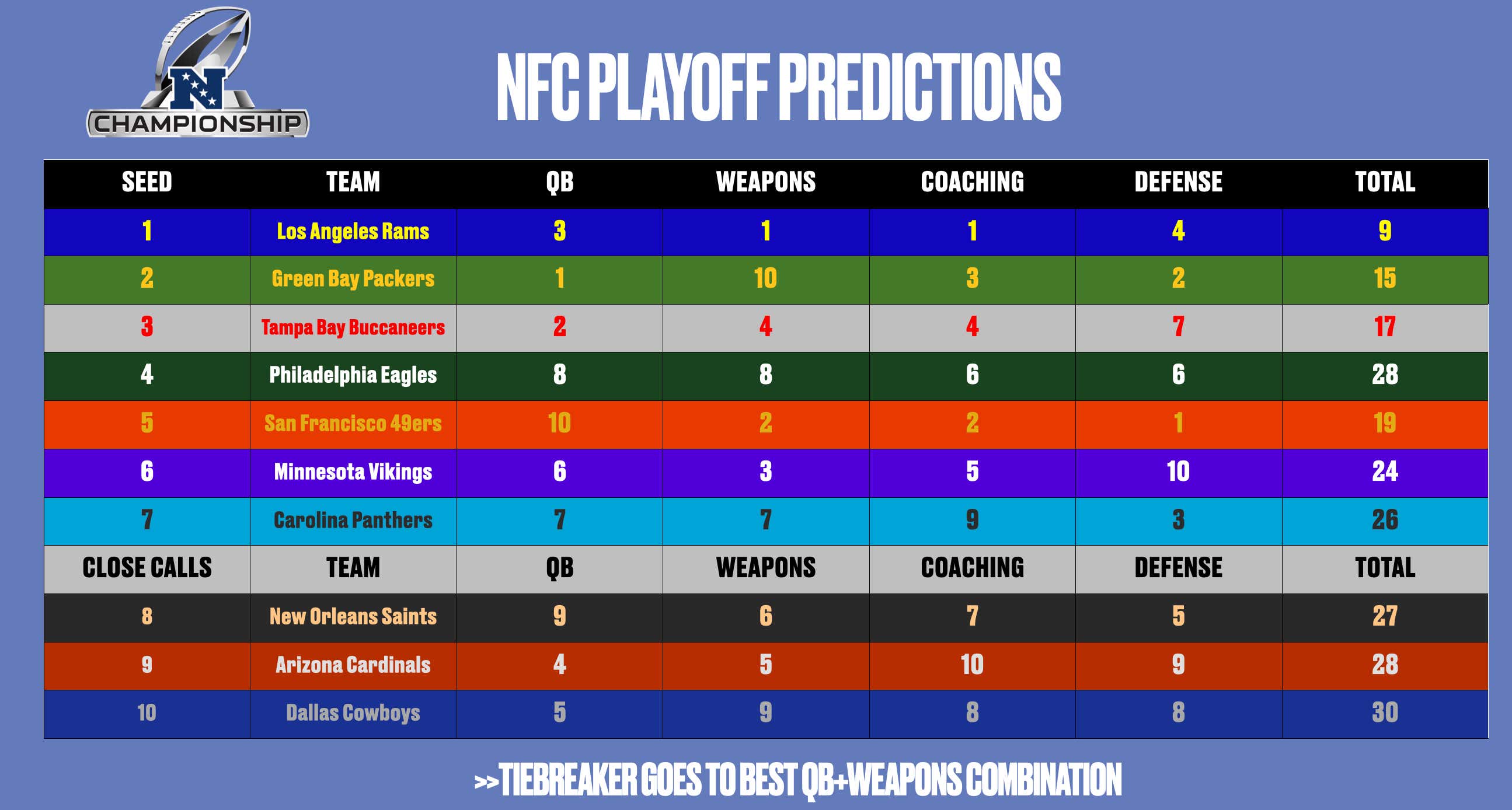 The NFC is more top-heavy, and again, we have a lot of continuity in terms of division champs. With the Vikings defense being such a question mark, the Cowboys' myriad problems (weapons, injury to left tackle Tyron Smith, Mike McCarthy's game management) and the fringe contending status of Carolina and New Orleans, I struggle to see how the Packers, Bucs or Eagles will be threatened.

If Trey Lance can put it all together, maybe the 49ers give the Rams a run for their money in the West. Either way, it feels like the Cardinals are a tier below San Francisco and the defending Super Bowl champions. Still, I anticipate the Wild Card chase to be a very tight one as at least four viable teams vie for the final two berths.

You can learn from the above TikTok why I not only bet on the Panthers to go at least 8-9, but also why I think they're likely postseason-bound. Minnesota has receiving extraordinaire Justin Jefferson and top-flight tailback Dalvin Cook to help Kirk Cousins as he adjusts to yet another new play-caller. I'm sure he'll be relieved Kevin O'Connell is there to stay, barring a one-and-done disaster, which seems unlikely.

The culture change for the Vikings from the old-school, no-fun Mike Zimmer days is real, as outlined in an excellent recent feature by Tyler Dunne…here's the tip of the iceberg in the form of a quote from Vikings assistant and longtime NFL cornerback Terence Newman:

Gotta take into account those good old intangibles when applicable.

PS I love how this NFC playoff bracket hypothetically shapes up. Tom Brady dunking on Aaron Rodgers one last time on the way out the door, as the Packers have another offseason crisis of "will-he-or-won't-he" on Rodgers' retirement plans and Brady probably peaces out of Tampa regardless of how the Super Bowl would play out.

Other than maybe the Wild Card Round, I have the superior QBs winning all the other matchups. I feel pretty comfortable with that.

It'd be awesome if Todd Bowles and Brandon Staley end up as the head coaches in Super Bowl LVII. So much for the "FIND AN OFFENSIVE GURU AS OUR NEXT GUY!" hiring strategy. I'm joking. That'd be the knee-jerk reaction and talking point amongst the talking heads. I can see it now "When we come back after the break: Should NFL teams start pivoting back to hiring defensive coaches for lead jobs?!"

In a perfect world, my answer would still be no, because if you get an offensive coach who can call the plays, you don't have the threat of turnover and instability around your quarterback every season. That's really what matters most, right?

I digress. Tom Brady has played in six of the past 11 Super Bowls. That's a large enough sample size for me to roll the dice again and say he'll make it back. This man cannot quit.

I went the opposite of homerism and completely disrespected my Bengals' coaches and defense in the aforementioned crude formula for seedings. Still couldn't see a world in which they don't ascend to the No. 1 seed in the AFC. I'm aware, though, that there's another freaky third-year QB in the conference and his name is Justin Herbert.

Much as it pains me to say it, this may finally be the year where the Bolts overcome soul-crushing seasons of disappointment to make it to the Super Bowl and beat my beloved Bengals in an AFC title game for the ages. Can't tell you how wrong I hope I am about that in particular.