Eight Barstool Sports employees living in the office for one week. Only one person can walk away with the $10,000 grand prize. The sole winner will be voted on by the five that were voted out. Surviving Barstool Season 2 Presented by Mattress Firm reached it's ultimate conclusion last night, but let me give you a behind the scenes look on what happened and why. 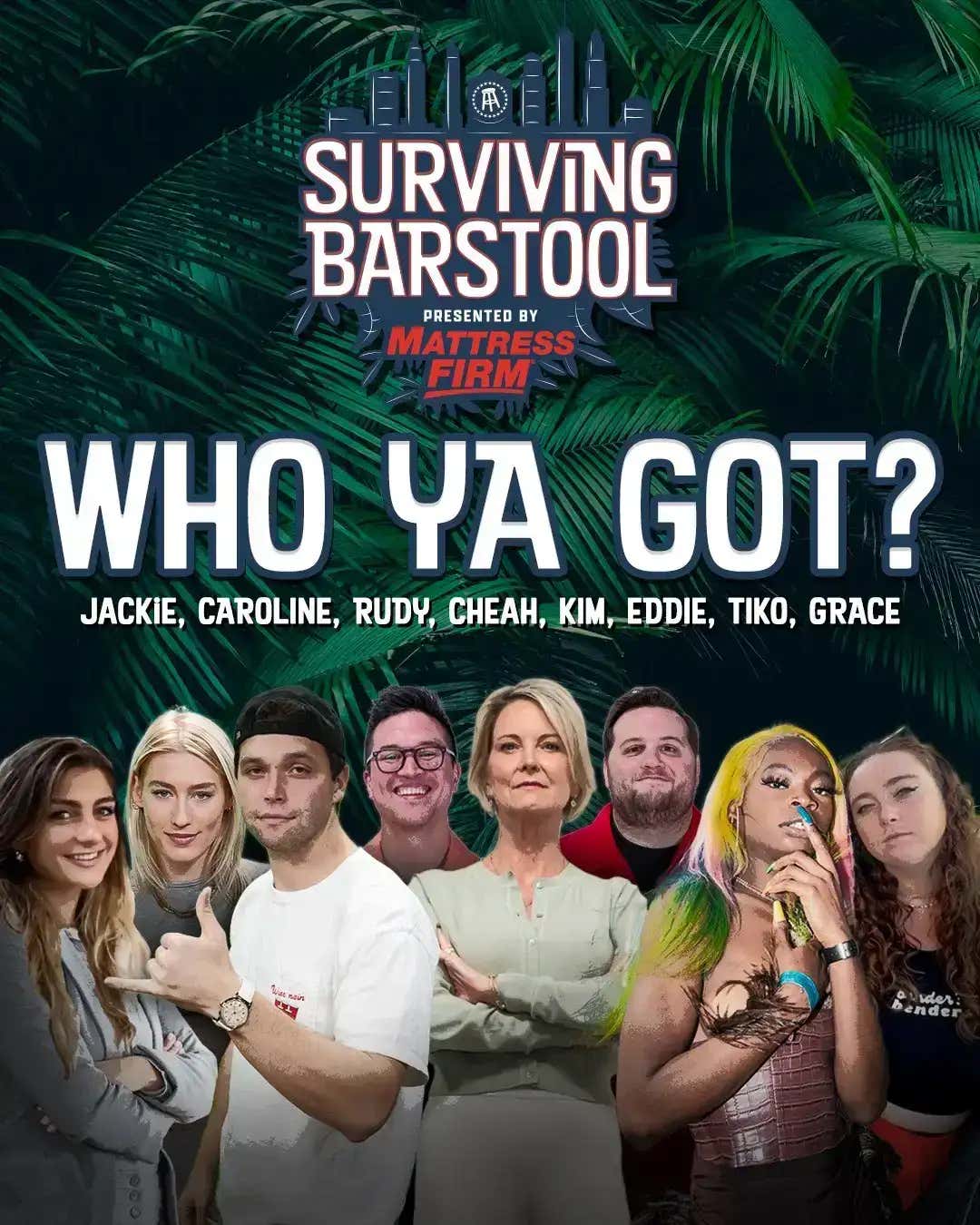 The episode starts with a nice moment for our alliance. The whole week was so exhausting with the lack of sleep, paranoia, scheming, and looking for that damn immunity ring, we were all very relieved to have accomplished our team goal, which was to make it to the final four. It was nice to get to relax for a night and not really plot as it was all going to come down to who won the challenge the next day. We all actually just hung out together and watched a movie together over a few drinks. It was the lowest stress night all week. But the next morning, we knew someone's run would end. 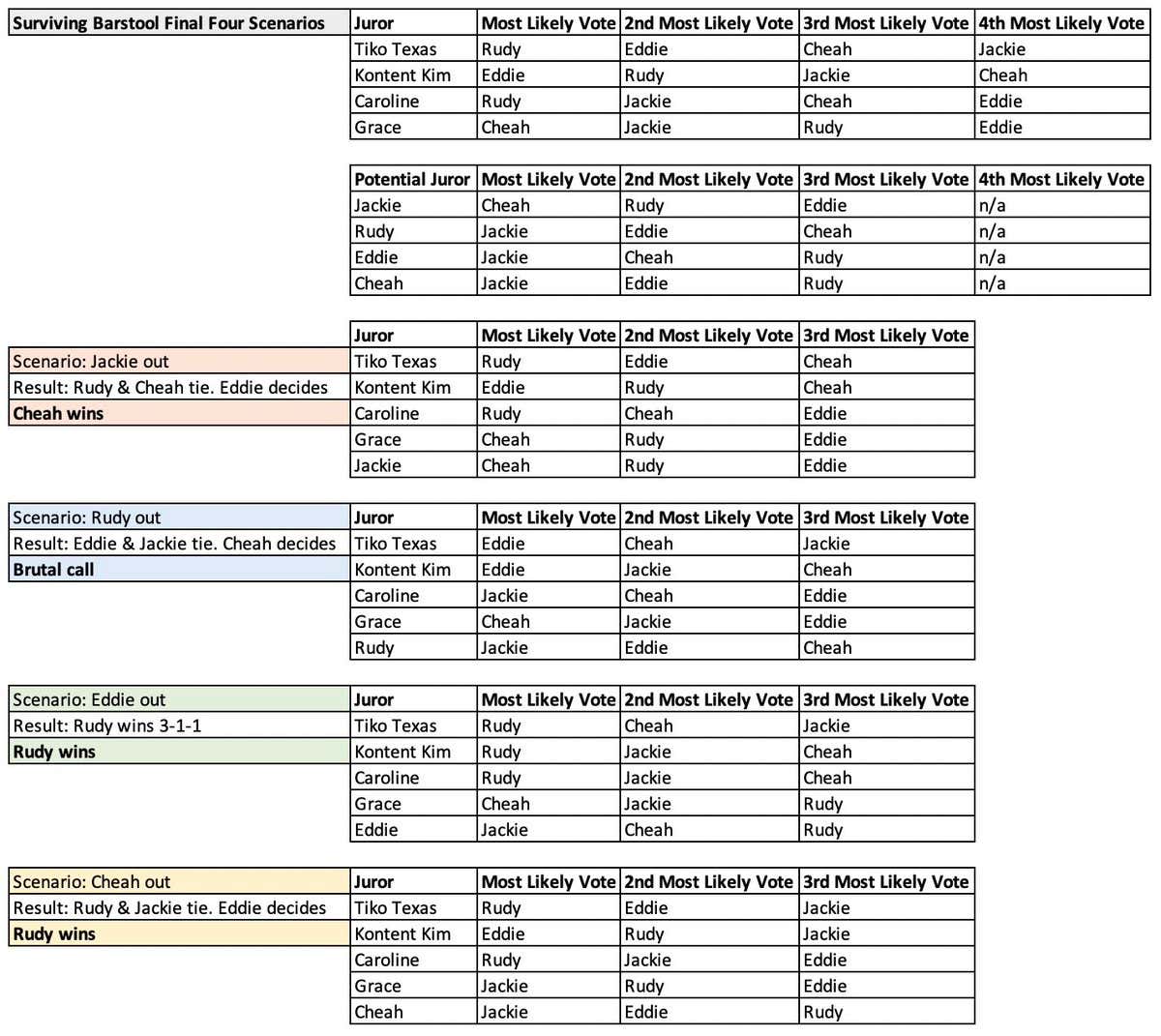 Consider it polling. Certainly nothing was written in stone, but in that moment in time, this was a true depiction of how it seemed each juror was leaning at that time.

The next morning, Jackie approached me with an idea. Internally amongst us four, Rudy was the favorite to win it all. He had great personal relationships with the jury, played a great game, and was the best at challenges. Jackie said we need to get him out. Eddie voiced a similar concern. The data confirmed he was the biggest threat as he won 2 of the 4 simulations I ran.

But it was all about the challenge. Something that Rudy was cut out for, but hadn't finished all week. But he was due. The challenge was to stand on a tree stump and every so often (20-30 minutes) they would pull away a ring and the stump would get smaller.

As a bigger guy, Eddie was not built for this challenge. He lasted as long as he could, but took a leap off to avoid a potential serious injury if he were to fall.

The challenge lasted for over an hour and a half with various Barstool personalities coming in to mess with us.

Credit to Jackie. She's scrappy as heck and after the challenge, she knew she was on the chopping block and I was her competition. So our talk before went out the window. She made the correct play in going to Eddie and saying if he doesn't get on the 'vote Cheah out train' then she'd go to me and try and get me to flip on Eddie. Very savvy play.

I then went to pitch my case to Rudy. Eddie was already sitting with him and I asked straight up if I was the play. Rudy said my name had been brought up. At this point, I could see nobody would be holding their word, so I went into scramble mode.

In hindsight, I'm not sure I change Rudy's mind here, but Eddie was truly undecided. I think my trying to convince Rudy to save me lost me Eddie's support and what may have been a 2-2 tiebreak, which would've been interesting.

In my talk with Rudy, he did ask if I wanted to pitch Eddie as a candidate, but we didn't have much time. I knew he knew at that point, Eddie was the least threat to win the game. That's not a knock on Eddie, he did a fantastic job playing his cards close to the vest and hadn't shown them all at that time.

The tribal council was nerveracking. I had a feeling it'd be 2-2 with Eddie backing me and going with Jackie. I did get a bit more chatty at this one. I'm not sure I was nervous but more feeling like there are the four of us left, there aren't any more secrets. I did reveal that Eddie and I had been working together for weeks. Rudy seemed upset by that, but I'm not really sure why to be honest. Once we formed a group of four, my loyalty was to that group. So I wasn't throwing that in anyone's face. If I wanted to turn on anyone I could've done it the night before when I had the immunity ring, but I stayed loyal to my alliance.

Going into vote, I really did think I was going to make it to the Finals. Even going as far to tell the cameras that I thought I just won the game. I think had I gotten to the finals, I win based on gameplay and speech. Grace had assured me of her vote after being let go. Caroline later told me she was going to vote for me. So I would've just needed one more vote and I think I would've had Jackie's. But alas, it was not meant to be. In a shocking twist, Eddie betrayed me and sent me packing.

And while I'm getting clowned for this, am I just playing the long game?

The game changed for a few reasons here. Rudy was not aware of my secret alliance with Eddie. Therefore, I was kind of expecting a Rudy flip, but I was not at all expecting an Eddie flip. In voting me off, I immediately turn to Eddie in disbelief. That followed by my exit and Eddie jumping to take credit after KFC's question put him in a great spot with the jury. Which is an unfortunate twist that Rudy couldn't really see coming without the knowledge of us working together long before we all aligned. So while Rudy was driving the bus, he got very little of the credit, which is tough. So in getting rid of me, Rudy unknowingly bolstered Eddie's resume to championship level.

The group did seem a bit dejected after and it sucks. You don't like to eliminate people, especially ones you've grown close to, but it's a game that forces you to get your hands dirty.

That feeling didn't last too long as they had to turn their attention to the Finals and there was no more physical competing, just pleading your case to the jury.

Eddie started off the speeches and he just murdered it. In all honesty, he pretty much put it away with that. Being a reality TV guy, Eddie knew he just needed to get to the finals with a big play or two to his name and he'd win. That was his edge. 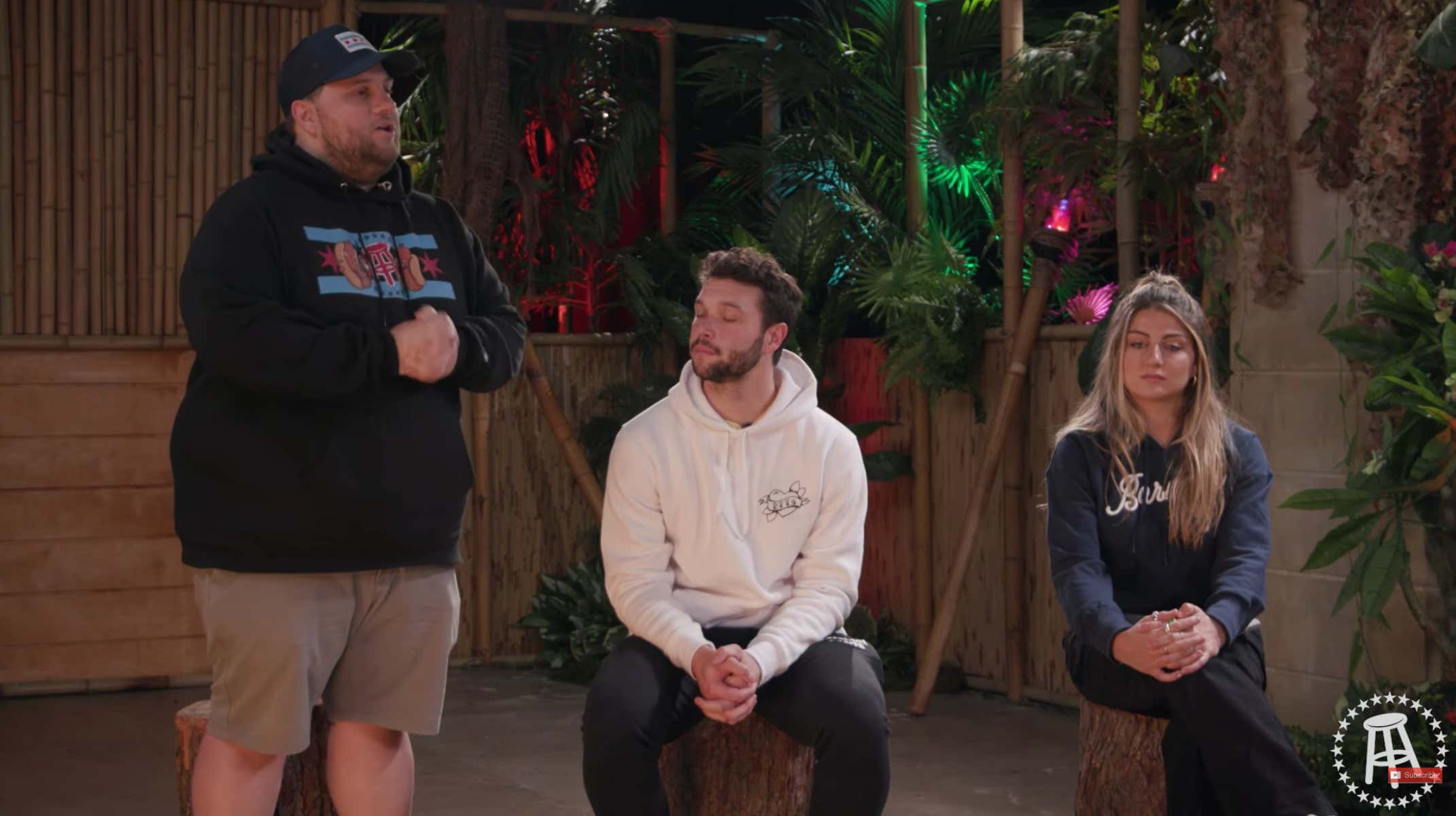 Me, Jackie, and Rudy were all playing the jury relationship game while also pulling moves, but Eddie had the clearest vision of what a victory would look like.

Rudy and Jackie finished it up with speeches that were both solid, but paled in comparison to Eddie's free-flowing speech. Then it was on to the jury to ask questions or even recite a poem, which Tiko blessed us with.

Not to be outdone, Kim laid the wood to all of us.

What people may not realize, is getting voted off happened and there was maybe 2 hours before the final jury. No more gameplay, just making your cases. I said it as soon as I was eliminated that I was voting for Jackie. Some people are calling it sour grapes and I get it, it can look that way. But in this game, I tried to hold my word at every turn. As long as you didn't come for me, then you were good. And Jackie was absolute ice all week. We formed our alliance based on the promise of her joining us and if any of us get voted out that we'd vote for her in the finals. I planned to uphold that the entire time and everyone knew that. If you have a problem with that, then that's on you, but I'd like to let it be known that I keep my word.

As we saw at the conclusion of the show, the votes went:

Even though I was bummed he dogged me, I was happy for Eddie and hugged him right after and told him it was worth it and he made the smart play. It obviously worked out as he won. Our plan the whole time was to be the final two, but it honestly turned out better this way. The show was a great success and we both got some shine. Things you love to see.

A Note: Surviving Barstool is a game that blurs the lines of a game and what is real. Much has been made about my style of gameplay, but I tried to be accommodating and honest with everyone. Caroline had literally requested to not be blindsided, so of course I'll tell her she's going home if she asks me. Kontent Kim seemed peeved that I told her I was voting for her when she asked me as opposed to lying to her face like literally every other person. Grace knew it was a numbers game and she needed to win the challenge, which is why she got emotional after it. Tiko was the only unfortunate casualty along the way, but she didn't see the bigger picture. By going after Eddie, she didn't realize that that meant I was gone the next day. Of course, she didn't realize I was aligned with Eddie, but what's done is done.

We came into this game and leave this game as co-workers and I bear no ill will towards anyone. Not towards Rudy for breaking his promises to me - he did what he thought was best and I encouraged that. Not towards Jackie - she fought hard to get to the finals and I was her only real play. And definitely not to Eddie, who was actually my friend before this show, even though he snaked me the worst. Because at the end of the day, it is a game. A game where deception is not only encouraged, but required. And at the end of the day, I'm genuinely happy for Eddie and admired his gameplay this season.

We talked a lot more about the big moments of the season including one hilarious moment that didn't make the cut on the reunion.

Thank you to everyone involved in this series, from the Directors, producers, camera people, audio people, set design, the cast, the higher ups, and especially the fans. This was such a treat to do and I loved every minute of it, even getting blindsided. Until next time…