One of the beauties of doing a movie podcast, and having a movie website, is that it has opened my eyes up to so many different movies from around the world. The world of cinema from the likes of South Korea, Japan, India, Sweden, and more can blow you away with a variety of genres, styles, and stories. That is very much the case with the Telegu (also known as Tollywood, while Hindi-language cinema is known as Bollywood) release 'RRR', one of India's biggest movies of all time, and a movie that has made waves on Netflix in the United States. For some, subtitles and movies in different languages can be a turn-off. I say, "to each their own," as diving into movies from around the world will only unlock a greater amount of incredible gems that can entertain you. 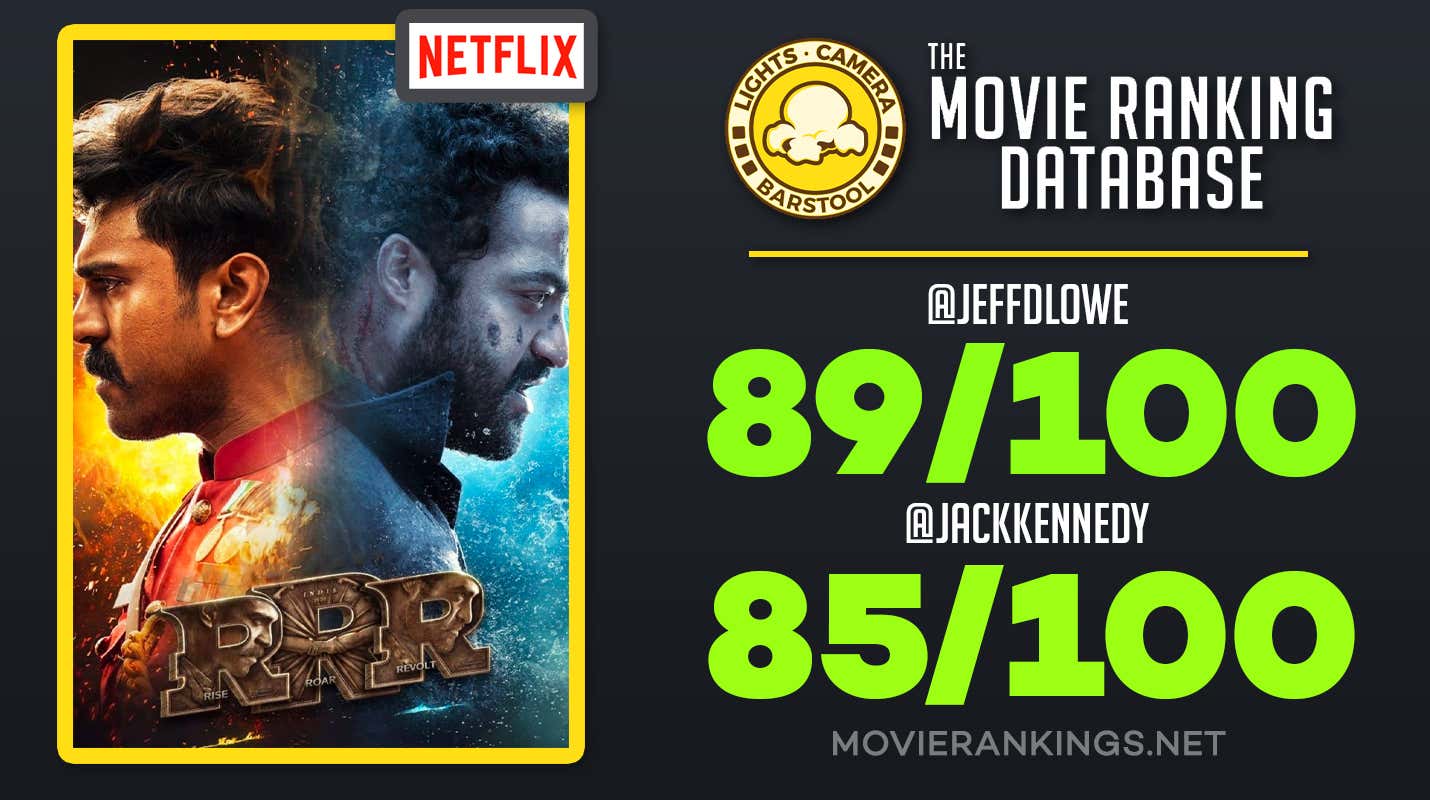 A fictitious story about two legendary revolutionaries — Gond tribal leader Komaram Bheem (N.T. Rama Rao Jr.) and independence activist Alluri Sitarama Raju (Ram Charan) and their journey away from home. Upon returning, they began fighting for their country's independence against British colonialists in the 1920s. (via MovieRankings.net)

NOTE: Do not play the videos if you don't want anything spoiled from the movie, but if you want a taste of what you can get with 'RRR', then click at your own risk!

JeffDLowe (89/100): To put it simply, 'RRR' is easily one of the most entertaining movies I've watched in my entire life.

Like so many other fantastic Tollywood movies, you get insane in-your-face action sequences…

…tons of heart in the story, epic dance numbers…

…and so much more.

If you've never truly experienced a movie from India, you are in for quite the treat with 'RRR'. All of these elements are standard for the country's massive film industry, spanning different regions in languages. Everything with 'RRR' is dialed up past 10 and straight to 11 and beyond. It obviously stands out with its success in India, but I think the "refreshing" feel of the movie is only magnified for someone who mostly just views American-made movies. Surely there are tons of great movies still being released in this country, but 'RRR' has that big-time event feel that we really lack these days outside the standard superhero team-up movie. Don't get me wrong, I love superhero movies, 'The Batman' is a Top 5 movie of 2022 for me, and I have multiple Infinity Gauntlets on my desk, but there is just something different about 'RRR', and it reminds me of the biggest movie of the year in the United States: 'Top Gun: Maverick'.

In a summer where we (rightfully) showered 'Top Gun: Maverick' with praise for bringing the feel of an explosive blockbuster back to theaters, 'RRR' is making waves in the United States with a very similar formula. While it may not have the practical aerial dogfights, or Tom Cruise, that 'Top Gun: Maverick' shows off, 'RRR' has that distinct feeling of passion and energy that sometimes gets lost within the same tired formula that gets regurgitated on the big screen. 'RRR' feels massive and explodes in a way that will rock you right out of your seat.

When it comes to the actual components of the movie, the epic action-adventure story of 'RRR' is one of pride, friendship, love and so much more. The movie is unapologetic in everything that it does, from the size and absurdity of the action sequences, right down to the usage of slow motion in so many moments. But none of it gets in the way, as the action is shot in a wide scope that makes it incredibly digestible, without losing any of the excitement. As always with movies from India, the dance numbers are show-stoppers that mold perfectly with the narrative being told on screen. The dance number I linked above, "Naacho Naacho", went viral prior to the movie's release across all social media platforms, and helped put an early spotlight on the movie. Sure, not all of the special effects in the movie are perfect, but I think that if you're focusing on that too much, you're largely missing the point.

I don't think I have ever rewatched a three-hour-long movie as quickly as I did with 'RRR'. The only negative I have to say about my experience with this movie is that fact I never saw it in a theater. 'RRR' is, without question, one of the best things in the entertainment industry, spanning corner to corner of the globe, in 2022. Go in with an open mind, and let 'RRR' blow you away.

KenJac (85/100): One of the things I have always loved about Indian movies is that a majority of them have a very consistent primary objective: Entertainment. It can come from giant action set pieces, slow-mo battles, singing, dancing, love triangles, rebelling children or any combination of the above. RRR is no exception.

I mentioned this on the pod, but this was recommended to me almost instantly from my Tolly/Bollywood followers who know I’m into these movies. The recommendations were so frequent, in fact, that I was dying to catch the Telugu version of this on the big screen back in April.

When I finally got to watch this on Netflix, I can safely say that it did not disappoint in the slightest. It is an over-the-top Dudes Rock extravaganza that has no less than 5 scenes that would be the main climax to any other movie. It’s long by western standards, but god damn does it earn the runtime through constant excitement. It also has the added benefit of seeing our heroes absolutely fuck up the inbred British Empire.

It is an awesome movie that I would recommend to anyone. However, I will add the caveat that you need to know what you’re getting into and approach it with an open mind. Prepare for multiple genres, song and dance numbers, insane action, tons of slow-mo and some romance.

--
The movie is Officially Buttered, and you can stream it now on Netflix, as well as hear our full review if you head to Lights Camera Barstool right here to listen to our latest episode where we discussed the movie at length.