It all started with these tweets from Froste.

For those of you that aren't familiar with Froste, he's formerly a member of "The Mob" along with Mako, Classify and Avalanche.

"The Mob" were mega fans of Nadeshot's gaming organization - 100 Thieves. They would make content together, hype up the org and make funny/engaging videos and streams. They started building a real community through this style and eventually started "The Mob." Their main goal was to be signed by 100T as content creators.

After two years in June 2019, they finally got their opportunity and signed with 100 Thieves. However, this isn't a cinderella story. Mako, one of the key members of "The Mob," left both the group and 100T to go back to his family because of issues with being a content creator. This was the beginning of the end. To put it simply, "The Mob" didn't have enough viewership or engagement to keep their jobs with 100 Thieves.

After tweeting late night, Froste seemed to open up a can of worms and set the gaming twitter world aflame. He started tweeting about not being paid enough, worrying about his next meal and overall was unhappy with the way 100 Thieves treated him and "The Mob." 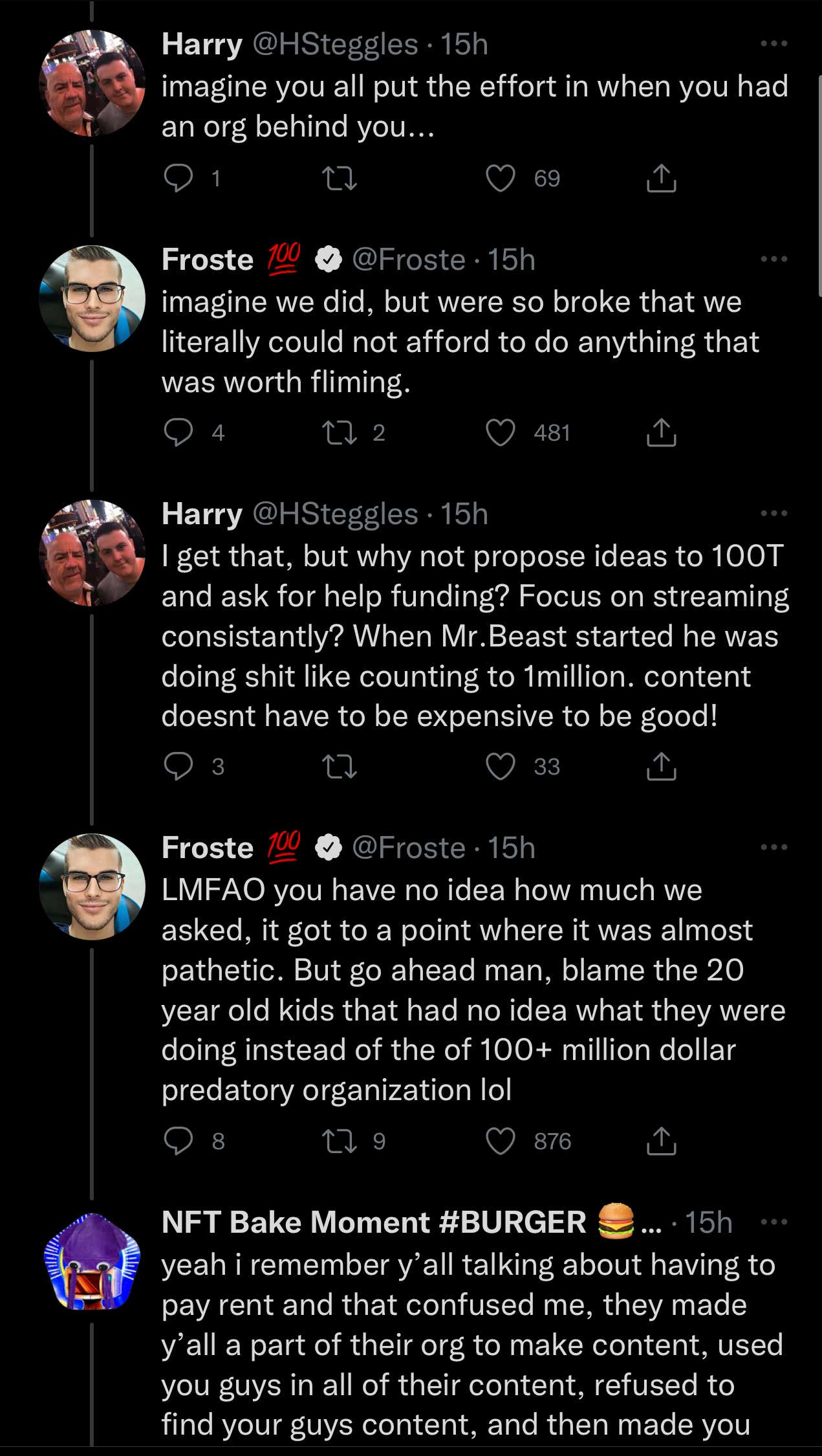 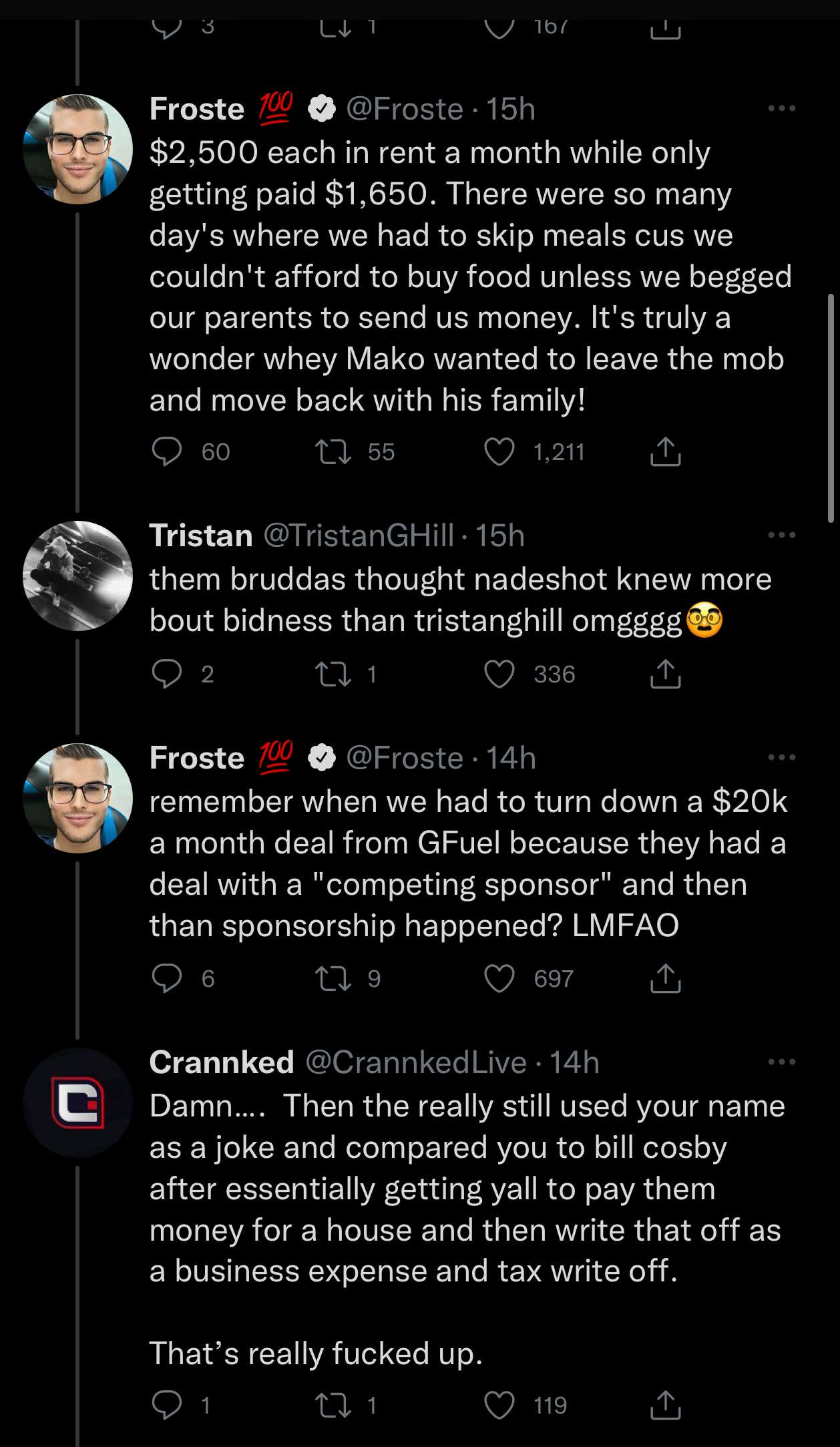 Alright, this is where it starts to get interesting. Froste starts complaining about his high rent and revealed that he was being paid 60k a year to live in LA and make content for 100 Thieves.

I also believe he was able to keep some money from sponsorships, his Twitch stream and YouTube channels. So the 60k was a floor, not a ceiling.

This one tweet made people go fucking crazy (myself included). Let's be honest here, this is A GOOD SALARY for an 18-20 year old. On top of all this, "The Mob" decided to live in a house that costs 10k/month, immediately putting themselves in a losing financial situation given their salaries.

Here's what other popular creators in the space had to say:

Basically, Froste opened up a can of worms that was so big, it forced Nadeshot to address the issues live on stream. I mean Froste was directly attacking Nadeshot's org and character. In the stream, Nadeshot completely dismantled Froste.

Nadeshot complained about their work ethic and how he continuously tried to provide them with opportunities. However, they would underperform or simply not do nearly enough work/content.

For those that aren't aware of Nadeshot's come up, this is his origin in the space. He's a fucking GRINDER!

You may be thinking, "Alright, Nadeshot has to be spewing some shit outta his ass, right?" Allow me to bring in Exhibit W that reveals "The Mob" had a $200,000 Ad deal that they failed to deliver:

Each member of "The Mob" would've received $30k for this deal, had it gone successfully.

Avalanche (one of the members of "The Mob") had this to say:

Ultimately, this story comes down to Froste being unhappy with the way his time went with 100 Thieves. Part of me thinks that Froste felt a sense of "I made it" after being signed to 100 Thieves, but failed to keep his foot on the pedal and use the 100 Thieves engine to make "The Mob" steamroll through the gaming community. We're waiting for Froste to go live any second.