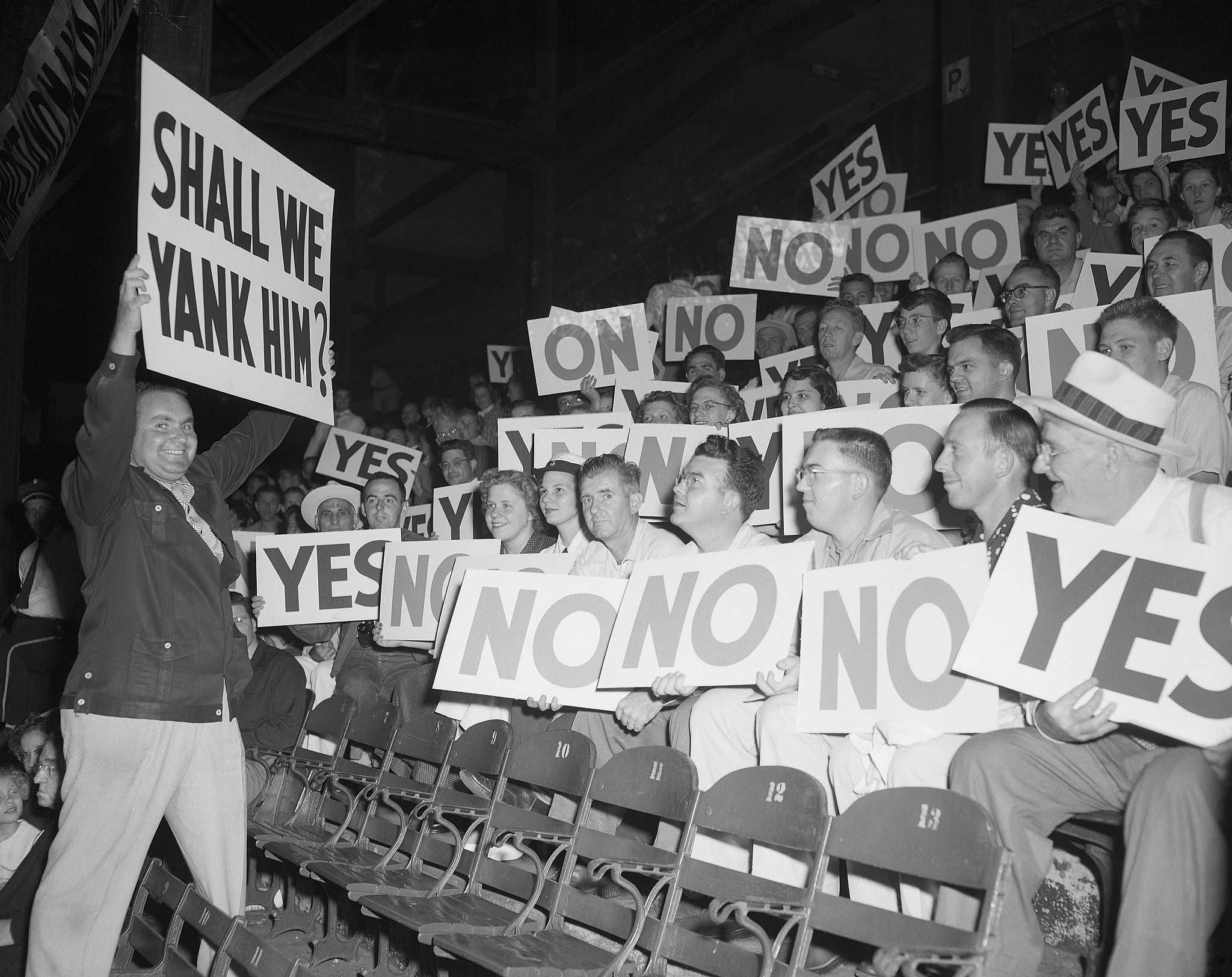 Another memorable promotion by Bill Veeck sees fans of the St. Louis Browns get a chance to be the manager as they host the Philadelphia Athletics at Sportsmans Park. The promotion is called "Grandstand Manager Night," as people sitting in the grandstand by the home dugout were given placards that tell the team what decisions to make during the game. The fans make the right call as the Browns win the game 5-3, a rarity for the Browns, who finished 52-102 on the season.

Mired in last place in the American League, the St. Louis Browns were looking for a way to break the monotony of the dog days of August. The team struggled to find fans in the shadow of the St. Louis Cardinals of the National League. Existing for 50 years, the Browns were hardly ever a factor in the pennant chase, having only played in one World Series. Before the season, Bill Veeck, who previously owned the Cleveland Indians, purchased the Browns, hoping to turn their fortunes around.

Things did not go well for the Browns in the first season of Veeck’s Ownership as they were mired in last place with a record of 36-77 entering a doubleheader against the Detroit Tigers at Sportsman’s Park. Looking to draw some publicity to his team, Bill Veeck signed Eddie Gaedel to make one appearance. After the Browns lost the opener of a doubleheader 5-2, Veeck had Gaedel get ready for his memorable plate appearance.

Five days after the Eddie Gaedel plate appearance, Veeck was at it again, giving fans with a special seat a chance to make the on-field decisions. Over 1,000 fans seated by the Browns dugout were given signs reading yes and no and asked what decisions were needed during the game. Browns manager Zack Taylor was seated in a rocking chair, wearing casual clothes while smoking a pipe, near the grandstand as the fans made the essential calls, including pinch hitters and relief pitchers.

The fans chose the lineup as they were given lineup cards with a consensus determining who would play when the cards were collected and tallied up. Athletics manager Jimmy Dykes was not amused by the promotion, as he accused Bill Veeck of making a farce of the game. The fans proved wise, as their call to play at double play depth paid off when Pete Suder hit into an inning-ending double play.

Both teams scored three runs in the first inning, with Gus Zernial hitting a three-run homer for the A's. The Browns' top hurler Ned Garver would buckle down and not allow another run. The Browns would take the lead in the third inning, scoring a fifth run in the eighth. The hitting star was Sherm Lollar, who scored three runs, with a double and a home run, with two RBI. No pinch hitters or relievers were used as Alex Kellner suffered the loss.