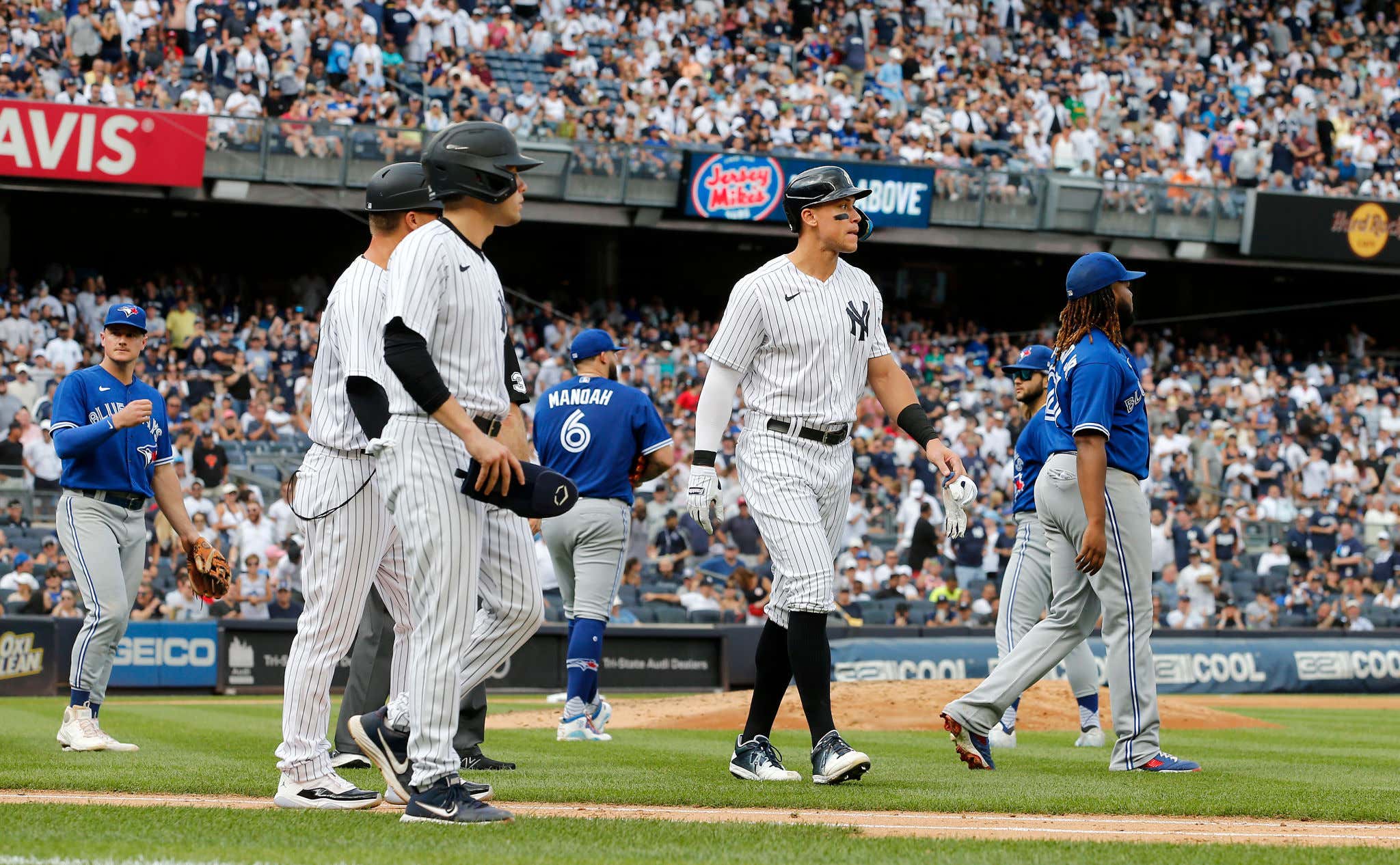 Emotions boiled over in The Bronx yesterday in the final game of a four game set between the Jays and Yankees. New York has been struggling for any kind of success lately, while Toronto has been inching closer by the day to striking distance of first place. On Paul O'Neill Day the Yankees had their backs up against the wall facing the possibility of being swept in the Bronx. As a result, tensions were high.

Fast forward to the 5th inning and the Yankees out in front by a run. Aaron Judge proceeds to get drilled up and in with a base open. He didn't like it and in a rare moment for him, had some words for starting pitcher Alek Manoah.

Credit to Judge for keeping his cool in the moment and calming everything down. I wouldn't have hated a brawl to ignite a seemingly lifeless team, but Judge being the leader there was cool.

Now everyone wants to make fun of Gerrit Cole hopping the dugout rail and jawing at Manoah, but that's just him sticking up for his teammate. People LOVE to hate on Cole so that's all you're seeing here. Reality is if your MVP gets thrown at and says a few words back to the pitcher, you have to assume something is up. Seems like Judge said something along the lines of "that's twice" referring to getting one up and in earlier in the game. Cole saw that and his first thought was to back his guy up. He did the same thing when Stanton and Lindor talked some shit last year in the Subway Series.

I'll knock Cole for not pitching like an ace consistently enough, but ripping on him for standing up for his teammate and having his back? Absolutely nothing wrong with that. Big shocker there was a heated moment in a game where a few guys told each other to go fuck themselves and then nothing else happened.

Here was Cole talking about it afterwards.

And then Alek Manoah bravely chirped Cole after the game.

Ah yes, you saw 6'7" Aaron Judge standing in your way and thought to play nice after sending one up the tower. Now that you're talking to the friendly media it's time to chirp Cole and look cool. Got it.

Oh and his "walk past the Audi sign next time" comment that everyone is crowning him for? Didn't see his fat ass hopping the railing a few months ago when Luis Severino asked him to come out there while they were going back and forth. Hmmm

Now I understand that's a long run from the dugout to the mound for a man of Manoah's size so let's be fair here. Maybe if they put a cheeseburger out there for him next time we'll see some movement. Guy hits a ton of batters, is always chirping from the dugout, and doesn't do a single thing. Fake tough guy if I've ever seen one. Just a good ol' fashioned hypocrite.

P.S. I always wonder what a company like Audi gets out of a sponsorship like that. Safe to say money well spent after Sunday.