Not going to lie. I'm starting to hate this particular blog series. Every week I say I'm going to write it gradually throughout the week, but that never actually happens. When Sunday morning comes around, I have to do the whole thing. I can't stress enough how difficult my job is.

Also, this blog is no longer called Sunday Sentences. It's called Dumping Them Out. I got the idea from someone in the comment section. Each blog will feature a boobs GIF. Sometimes maybe 2 or 3 boobs GIF's. You would know this already if I had published my blog last Sunday. I wrote the whole thing, but I thought it sucked, so I never submitted it. However, it felt like too much of a waste to completely trash the whole thing, so I tweeted it from my burner account. Here it is if anyone would like to read it.

I wanted to give you guys friendly reminder that I do ZERO of the editing for the Rundown. People keep giving me credit for it. I want to make that clear in case something goes wrong someday, and you feel like blaming me. I am not interested in receiving any blame. I do much better when I'm receiving only positive feedback.

I watched Rough n Rowdy from the office on Friday night. It was one of the better Rough n' Rowdys from what I can remember. I was pretty scared for Alex Bennett going into the fight. Her opponent, Cupcake, really had the look of someone who was going to beat the shit out of her. In the end it wasn't even close. Alex dominated the fight from start to finish, so that was pretty cool to watch. This morning, 2 days after the fight, Cupcake tweeted this out.

Unfortunately Coach Duggs did not win his fight for America. It was a massive L for all Americans, but it took a lot of balls for him to get in the ring. He picked a scary looking Canadian to fight. And he went the full distance, so props to Coach Duggs for that.

The clear fight of the night was when the second Abel brother, and whoever he was fighting just started throwing each other over the ropes. Terrible performance from the ropes on Friday. Realistically, if you're fighting in Rough n' Rowdy and you don't throw your opponent over the ropes, then what the fuck are you doing? There are zero repercussions for doing so. The ref is going to give you a stern talking to for about 3 seconds, then the fight will continue like nothing happened. If you throw your opponent over the ropes one time, you instantly become a Rough n' Rowdy legend.

Sometimes I wake up in the middle of the night and write down notes for blogs. Most of the time they aren't coherent thoughts. I took 2 notes last night.

That's the whole note. I vaguely remember having a thought about Drew Brees, but I can't for the life of me remember why. Drew Brees is an exceptionally boring athlete. I Googled 'Drew Brees', but the most recent news story about him is from 4 weeks ago, so I don't think he was in the news for anything recently. The most interesting thing about him is the weird birthmark on his face. One time he went on Oprah, and Oprah tried to wipe it off. It was a little embarrassing for both of them.

Husband: "Do you think we're ready to have an email account, honey?"

Wife: "I'm not sure, I know the Tim Williams has one, but I think he needs it for work."

Husband: "I just don't know if we would really use it."

Wife: "You never know, it could come in handy one day. Are they expensive?"

Husband: "I'm sure they're not free, but I bet we could swing it."

Wife: "Well let's think about it. I'll have some time Thursday after work if we want to sit down and figure it out"

Husband: "My brother has his surgery on Thursday, so we maybe shouldn't be online in case they call. How about Saturday?"

Wife: "Sure babe, we'll sit down on Saturday and see if getting an email address is right for us."

I'm pretty sure my parents had that exact conversation in 1998.

My brother sent me this picture of a John Deere ad in Chicago. It says, "We're here for deep dish and deep thinkers." 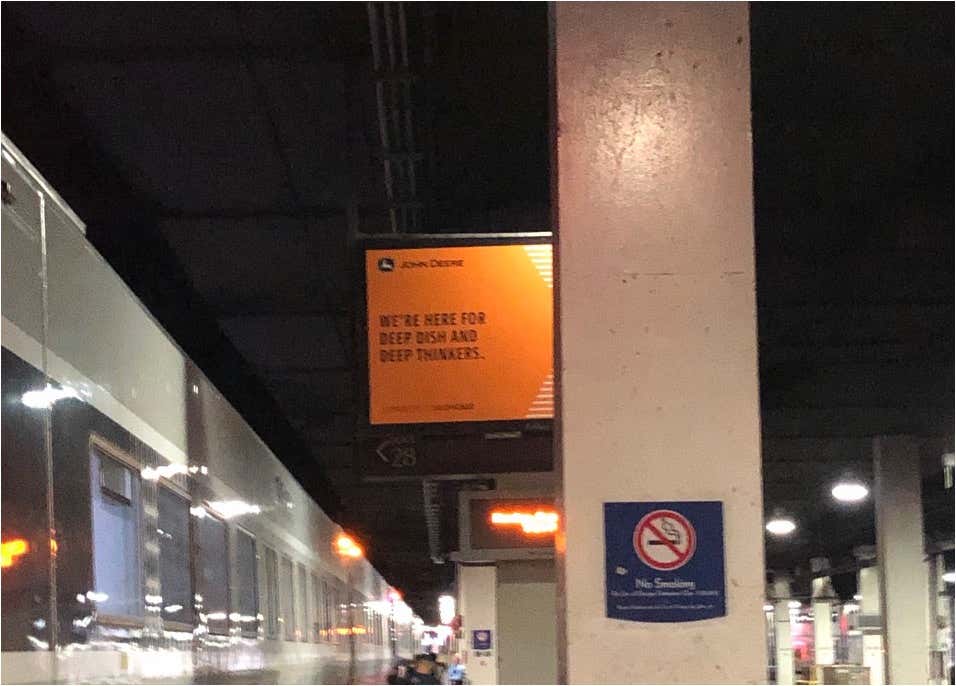 John Deere sales must be down in Chicago, and their marketing manager thinks the only way to get through to Chicagoans is by incorporating deep dish pizza into their ads. To be fair, I hadn't thought about John Deere in years, but I just spent the last 15 minutes Googling "John Deere Pizza", and now I'm writing a blog about them, so I guess the ad is kind of working.

Finally, I just got my first electric bill sent to me and it says I'm using $26.84 in electricity each day. That has to be a mistake right? I'm on pace to use over $800 of electricity per month. Does anybody know what an average electric bill for a 1 bedroom apartment in Jersey City should cost? If that's what it's going to be every month, I'm going to have to get an OnlyFans. I think if I show my dick, shaft and balls on a regular basis, I could make a couple hundred bucks a month.