I sat down with Future NFL Hall of Famer Antonio Brown at Barstool Sports the other day. He came into the office on Thursday afternoon. We walked straight into a podcast room and closed the door. He left quickly afterwards, so that's why you haven't seen any pictures, and why nobody else at Barstool saw it happen. He didn't allow cameras either, so I will be transcribing the interview.

I prepared a series of questions for Mr. Brown. We sat down at the table, took off our shirts, and got right into it.

Me: Care to elaborate?

Antonio Brown: Not particularly, it's just been a rough morning. I woke up to my dog puking in my bed. I'm scared she's sick.

Me: I'm sorry to hear that, what type of dog do you have?

Antonio Brown: I would prefer not to say.

Me: Understandable. What brings you to Barstool?

Antonio Brown: I feel like people have the wrong idea of me. I'm always in the news for the wrong reasons. Whether it's for farting on a doctor, dying my mustache blonde, or sexually assaulting a trainer. I just want a chance to show the people who I really am. When I saw that you won Barstool Idol, I thought you would be the perfect person to have an interview with.

Me: I appreciate the kind words, Antonio. I agree, I think you and I are a great combination. I bring something a little different to the table than most Barstool personalities, and you're an NFL superstar.

Antonio Brown: You definitely do, and I definitely am. I've always been a big Barstool fan, but I never felt comfortable enough with anyone to do an interview. Barstool has taken a lot of shots at me over the years. I understand that it's all jokes, but they still hurt my feelings. In the end I'm just a regular guy.

Me: You really are just a regular guy.

Antonio Brown: I really am.

Me: You say you're a big Barstool fan. What is your favorite Barstool show?

Me: As do I. But enough small talk. Let's get down to brass tax. Seeing as this is Barstool Sports, this interview is going to be a little bit zany. I hope that's alright with you.

Antonio Brown: Oh no, now you're making me nervous!

Me: Haha no, no don't feel that way. This is going to be fun.

Me: Me too. Let's start with something a little out of the box. What is one thing about Antonio Brown that you wish people knew?

Antonio Brown: Anyone who knows me knows that I would never be caught dead without an umbrella. You never know when it could rain. Especially down in Florida. It can be perfectly sunny one minute, then all the sudden you're caught in a rainstorm. If you don't have an umbrella, you're going to end up looking really stupid.

Me: You've had some wacky hairdos to protect too.

Antonio Brown: Haha yes I certainly have. What was your favorite one?

Me: Probably the Lego man haircut.

Antonio Brown: What do you mean by the Lego man haircut?

I pull up this photo and show him 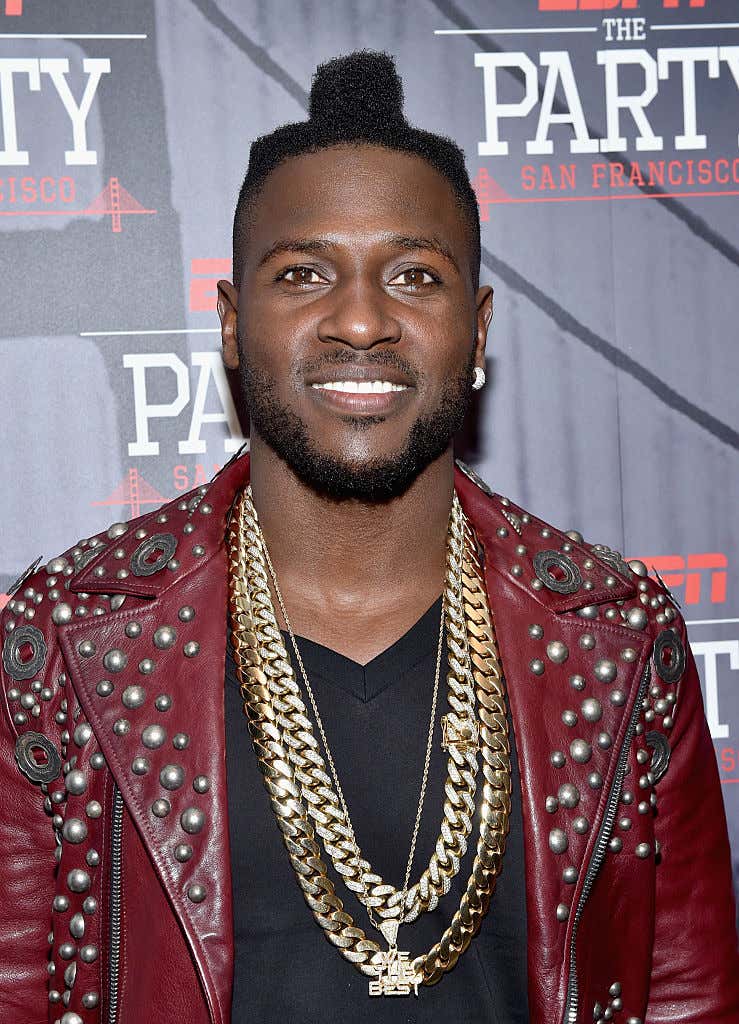 Me: Do you think I could pull off something like that?

Me: That we do, that we do. Ok, here comes the next question. Once you call it quits in the NFL, what comes next for Antonio Brown?

Antonio Brown: First off, Antonio Brown doesn't quit things. Things quit on Antonio Brown. But to answer your question, I have always wanted to be a game show host.

Antonio Brown: It is so. I've never told anyone this, but remember when Aaron Rodgers hosted Jeopardy earlier this year? The Jeopardy producers actually reached out to me first.

Antonio Brown: It just wasn't great timing for me. I had just got a new puppy, and I was spending a lot of time breaking down mentally. I decided it was best to let Aaron Rodgers do it.

Me: Do you think you'll get that chance again?

Antonio Brown: I would hope so. Despite the sexual assault allegations against me, I am surprisingly good at Jeopardy. Usually I get around 80% of the questions right. I think that, plus my charming personality would make me a great host.

Me: I would love to see that. What is your best category?

Me: That makes sense. Have you seen any of Barstool's game shows yet? The Dozen, Barstool vs. America, Surviving Barstool, or Barstool's Most Dangerous game?

Antonio Brown: No, but I plan on watching them soon. Which one would you recommend I watch first?

Me: I'm a big fan of The Dozen. I'm actually going to be on a team this year with Feitelberg and Reags. But you can't go wrong with any of the shows

Antonio Brown: Wow, sounds like you have a pretty good team. I'll be sure to check that out.

Me: Maybe Barstool will hire you to host one of our game shows some day.

Antonio Brown: Haha now THAT would be fun!

Me: I'll see if I can pull some strings. You released a rap album titled Paradigm, on April 20th - is that a marijuana reference?

Antonio Brown: If you want to make it in the rap game you have to be edgy. I know a lot of people don't approve of the weed smoking lifestyle, but it's a creative risk I was willing to take.

Me: That takes balls. You're a braver man than me. My next question is, if you could be any animal, what would you be?

Antonio Brown: I would definitely be a Sasquatch. In many ways I wish I was more like a Sasquatch. Always hiding in the bushes. Having giant feet. Leaving behind trails of animal bones. Only appearing in grainy footage. That's the life.

Me: Do you consider yourself the Sasquatch of the NFL?

Antonio Brown: Sometimes I feel like a Sasquatch when I'm playing with Tom Brady. Despite me being a large hairy threat, he acts like I don't exist.

Me: Wait.. that sounds like something you wouldn't want to be?

Antonio Brown: Well, it's a bit of a double edged sword. Sasquatches are the most respected animals in the forest, but at the same time they don't even exist. You have to take the good with the bad.

Me: I can tell you've thought a lot about this.

Antonio Brown: If a Sasquatch dies in the woods, is his body ever found?

Antonio Brown: Trick question. Nobody has ever found a dead Sasquatch, because they're immortal.

Me: That just blew my mind.

Antonio Brown: That's the thing about dealing with a Sasquatch. You never know what you're going to get.

Me: Ok lets move onto something else.

Antonio Brown: Do we have to?

Me: If you could be any fish in the ocean what would you be?

Me: No, thanks. Would you like to ask me a question?

Antonio Brown: I would love to.

Me: Ok, go ahead when you're ready.

Antonio Brown: If you could be any anim--

Antonio Brown: Ok fine, I'll think of something else.

Me: Take your time

Antonio Brown: I will.

Antonio Brown: Do you think I actually assaulted that trainer?

Me: Right we'll stick with that format. I've read before that you avoid alcohol. Is that true?

Me: Oh really? But you've gone on the record saying that alcohol is bad for your health.

Antonio Brown: Yes, but I was drunk when I said that. I'm always drunk. From the time I wake up, to the time I go to sleep.

Me: What about during football games?

Me: But you had such an incredible career? You were one of the best receivers in the game for a decade. You mean to tell me that you were belligerently drunk the entire time?

Me: What's your drink of choice?

Antonio Brown: Thanks man. That's why it's so tough when people bring up the sexual assau--

Me: Why do you keep bringing that up?

Me: I was never planning on talking about that. I forgot that even happened until you brought it up. Now I feel like I shouldn't even be doing this interview.

Antonio Brown: I thought that was the only reason you brought me in.

Me: You said you were looking forward to this interview.. I told you it was going to be "zany".

Antonio Brown: I just thought you were going to bring it up in a zany way.

Me: You're not a good person are you?

Antonio Brown: What made you think I was?

Me: I don't know… I wanted to give you the benefit of the doubt. I knew the interview would get a lot of clicks. I thought it would be good for my career. Now I think it might end it.

Antonio Brown: I'm sorry you feel that way. I could talk more about Sasquatch if you'd like?

Me: Alright fine, what more about Sasquatch?

Antonio Brown: The first time I saw a Sasquatch was when I was 8 years old in Miami, Florida.

Me: You saw a Sasquatch on South Beach?

Antonio Brown: I sure did. Everyone saw it. It was all over the news. He hung out on the beach for hours.

Me: That's just not true.

Antonio Brown: You're the one who asked me about Sasquatch. I'm just telling you my story

Me: I didn't really ask, you kind of strong armed me into it.

Antonio Brown: His feet were so big. He was 14 feet tall.

Me: Alright, I think that's enough.

Antonio Brown: He was covered in long brown hair.

Me: Please leave before anyone sees you.

Antonio Brown: Ok, well thanks for having me. This was fun.