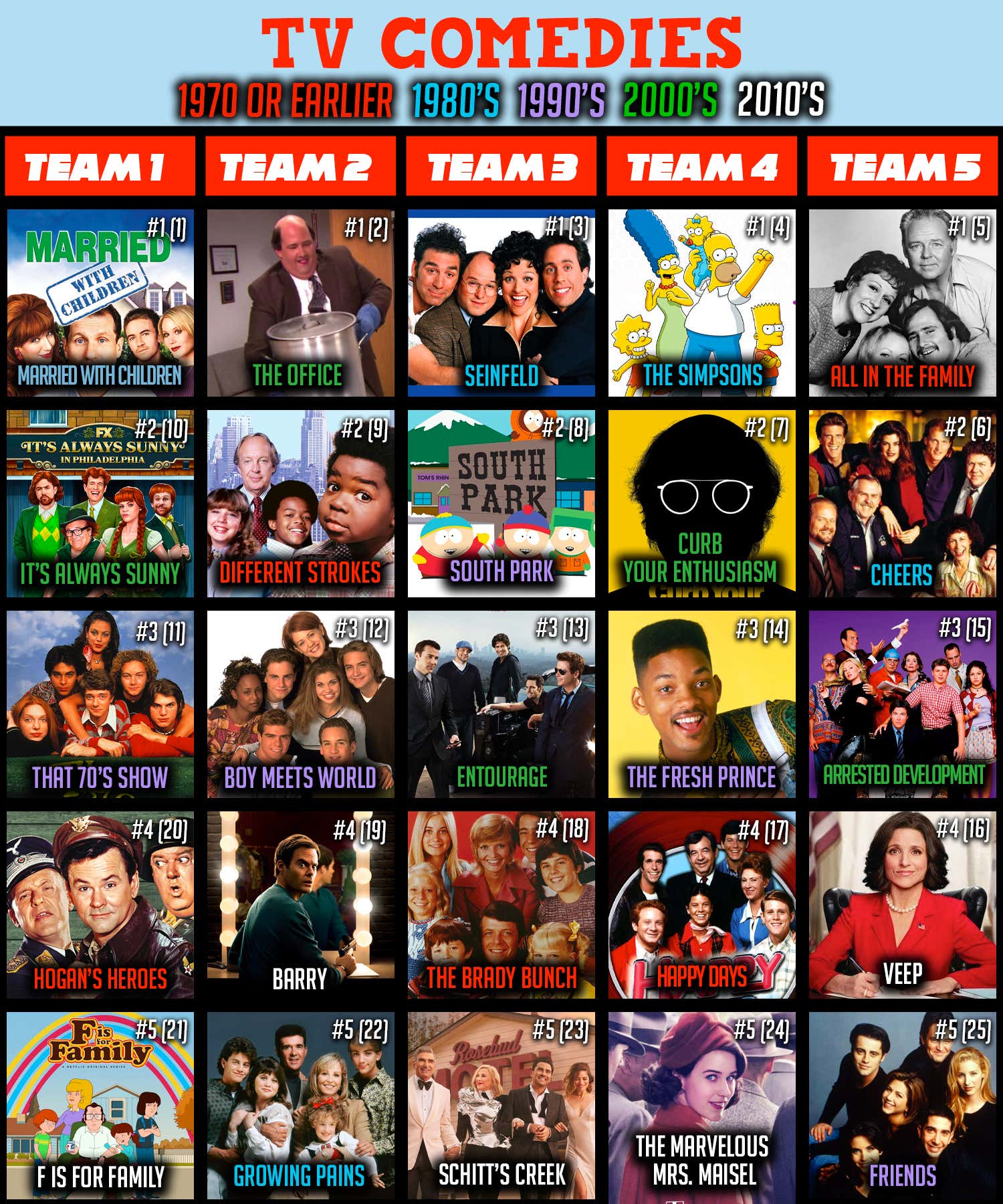 I love this topic - everybody loves a funny TV show. I've spent a sizable portion of my life watching sitcoms and now it's time to decide which grouping is the best. A few categories the Drafters must choose from:

We also had our first ever Dog Walk Draft TRADE between two drafters. The owner of the 1st pick wanted to move down and swapped with the 4th pick and all correlating slots. An interesting move that I believe paid off BIG TIME for the Drafter moving down to the 4th.

Now that that is all clear, let's get to the grades:

There were so many heavy hitters on the board and he chose to go Married With Children, which is a fine show, but is clearly the third best show from that decade chosen in the first round. Maybe the worst 1.1 pick I can remember. He would have been able to get that at the end of the 2nd Round no problem. It's Always Sunny in Philadelphia is a very good show and has appropriate value at the 10 spot. But I also hated the That 70s Show pick at the top of the 3rd. Inexplicably, Family Guy was left off the entire graphic which is wild considering The Simpson's went in the 1st Round. Hogan's Heroes may be a nice homage to this Drafter's Dad but nothing more. F is for Family I can understand, but they rattled off so many better newer shows that could have went. That going in front of Schitt's Creek is wild too, even for the final round.

Big respect to this drafter for refusing to pander and going with what he liked. The Office is an easy 1st rounder and probably the best strategy of the power three (The Office, Seinfeld, The Simpson's) that was in the 2000s. The 90s was just so loaded you had opportunities later and he took advantage with Boy Meets World which does not get enough credit. That show seemed to get better as time went on and they all went to Penn Brook. Diff'rent Strokes is a personal favorite of mine and while Round 2 seems a bit rich to me, he did try and block Drafter 1 from taking it, so I respect the strategy. Barry is a good modern pick in the 2010s and Growing Pains is a great selection in the final round for the 80s.

Seinfeld at 3rd overall is bonkers. This was an easy 1.1 for me. The greatest show of all-time. South Park was well argued and this drafter's familiarity to one of the characters of the show was striking. I was never a big entourage guy, but I can respect it's cult following and 3rd round is appropriate volume. The Brady Bunch is a sneaky good pick for 1970s or earlier and everybody knows that show, regardless of age. Schitt's Creek is a fantastic pick for the 2010s and really rounds out a terrific draft for this eccentric fella.

This trade down was incredible. He gets a top 3 pick at #4 overall and then gets the 7th pick instead of the 10th pick. Bonus points for that trade. The Simpson's is iconic. Just an absolute run the card up at 4th overall. Curb Your Enthusiasm you get some of that Seinfeld wave, so a savvy pick in Round 2. The Fresh Prince of Bel-Air is a good show, but I'd argue Family Guy should've been the pick here, even with this Drafter taking a similar show in Round 1. Happy Days is a good 1970s or earlier but I don't love The Marvelous Mrs. Maisel in the last round.

KYP is a football term. It means "Know Your Personnel". This Drafter did not KYP when he drafted All In The Family 5th overall. He could have saved that for Round 3 or later and been fine. Cheers is a logical pick with Seinfeld and The Simpson's off the board in the 2nd Round. Arrested Development has a cult following so that is a sneaky good pick. Veep can stand on it's own, but still gets some of that Seinfeld shine with JLD. While I'm not a Friends guy in the least, that in the last round is well done. I also would have preferred Family Guy here, but respect the selection.

Who do you think won the Best TV Comedies of All-Time Draft? Vote here: