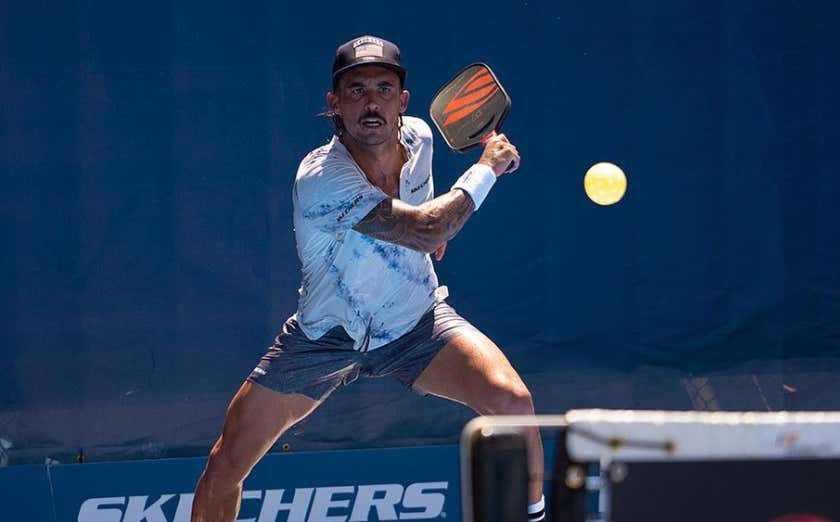 It's been a massive summer for elite athletes with the mullet and mustache combo. First up we had Cam Smith winning The Open. And now we have pro pickleball player Tyson McGuffin making his national television debut at the Skechers Invitational.

First of all--that is a name. You don't get named Tyson McGuffin at birth and go on to sell insurance for the rest of your life. No offense to insurance sales people out there but you get what I'm saying. Your name is probably Brian Jones or something like that. You don't have anybody in your office named Tyson McGuffin. And that's because Tyson McGuffin's are born to be stars. ESPECIALLY when they look like this.

You take one good look at this stallion and you know we're witnessing greatness.

The mullet. The mustache. The tattoos. The henley. This dude has it all.

But does he have the game to back it up? You can look like a star all you want, but the only way to prove it is on the court. So let's let the man's play speak for itself.

Holy shit this dude rocks. He's all heart and hustle and determination out there. Just when you think you have him beat and out of a point, he leaves it all out there and pulls off miraculous shot after miraculous shot. And it's not just the hero hustle shots, either. For a man who looks that wild, McGuffin has some silky smooth hands and some crazy soft touch.

Do you know the McGuffin Man? Because if not, you might want to get out of his kitchen before he burns you with a nasty drop shot. Then he'll toss his hat at you for even thinking you had a chance.

Now unfortunately at the end of the day, McGuffin just ran into the greatest pickleball player in the world and Ben Johns ended up taking home the men's singles championship (he also won the men's doubles championship with his brother the day before).

But this might be the rare case of the loser actually coming away with the win. Tyson McGuffin might not be a Skechers Invitational champion, but the man is a star. And that stardom might transcend the trophy case. So congrats to Ben Johns on the clean sweep at the tournament, but I'm a McGuffin Man for life.

Sidenote: this is your sign to finally join that pickleball league in your town. You know you've wanted to try it out. Just do it.