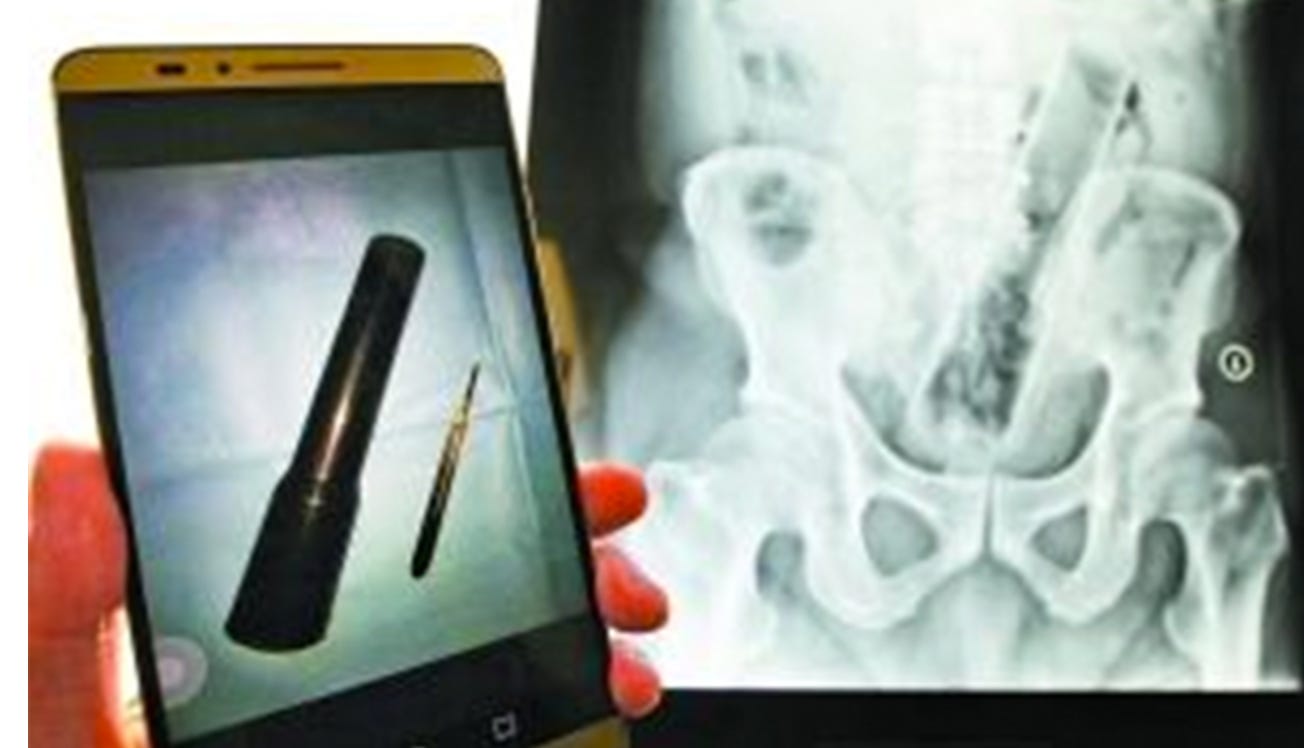 Shanghai- A man in Guangzhou has refused to tell doctors how a 25-centimeter-long plastic cylinder was inserted into his anus after recently undergoing a complicated operation to remove the thing. The foreign object was so deeply lodged into the man’s rectum that doctors at the First Affiliated Hospital of Guangzhou’s University of Chinese Medicine had to remove it by cutting into his abdomen, Guangzhou Daily reported. The flashlight-shaped object with a two-centimeter diameter was extracted after a two-hour long operation. The patient, surnamed Cai, did not disclose why the thing was up there in the first place. “He is in stable condition and will remain in observation for two days to monitor for intestinal bleeding,” Sun Feng, one of the doctors at the hospital, said in the report. Sun added that in his entire 10-year career, he has only seen two such cases. The last one involved a chef who had a large cucumber stuck in his anus. The family of the patient, surnamed Cai, said that the plastic object may have been shoved up there during an argument at a KTV bar. Cai has remained tight-lipped on the subject.

Bar fights are chaos.  One second everybody is having a joyous time singing the lyrics to a hip hop song and then next second bottles are flying and innocent bystanders are taking Bud Light shrapnel.  It happens in the blink of an eye.  They’re usually over something stupid like somebody accidentally spilled their beer on a dude whose Dad didn’t hug him enough so it comes to blows. Or a blacked out drunk guy is hitting on another guy’s girlfriend because he’s desperate to find love and the guy doesn’t appreciate it.  Lots of clashing testosterone.  However, amidst the chaos, one thing becomes very clear and that is there are almost always no winners in a bar fight.  Some people end up bloody, some people end up in handcuffs and others just end up laughing at the spectacle but there’s very rarely a victor.  Just broken glass, broken noses and police reports.  That is not the case at all with this particular bar fight in Shanghai.  There were very clear winners and losers.  There are few steadfast rules in life but one of them has to be if you need to get a flash light surgically removed from your ass after a bar fight, you lost.  You did.  The second you walk in to the ER and mutter the words, “I have a flashlight jammed so far up my ass that I can’t simply remove it” it’s over.  Give that other person the Bar Fight Championship Belt because they bested you. Better luck next time and don’t get a flashlight rammed up your anus.