Pitcher Terry Felton continues to struggle as the Minnesota Twins are beaten by the California Angels 6-3 at the Metrodome. Entering the game with the Twins leading, he allows three earned runs and gets the loss, dropping to 0-11 on the season. Felton, who lost three games in 1980, was now 0-14 in his career, a new Major League record for consecutive losses without a win. Terry Felton would finish the season with a record of 0-13.

Born in Texarkana on October 29, 1957, Terry Felton was a highly touted pitching prospect out of Baker, Louisiana. Felton quickly worked his way through the Twins system. He made his debut On September 28, 1979, pitching two perfect innings against the Milwaukee Brewers at the end of a 10-1 loss at Metropolitan Stadium. Terry Felton got a chance to start early the following season but faltered, losing three games in five appearances while posting an ERA of 7.13 before returning to the minors. Terry Felton appeared in just one major league game in 1981 and allowed six runs in one and one-third inning for a hefty 40.50 ERA.

The 1982 season was a new era for the Minnesota Twins, as they opened the Hubert H. Humphrey Metrodome in Minneapolis after playing at Metropolitan Stadium in Bloomington for their first 21 seasons. The Twins were a roster full of rookies and rebuilding as they suffered through their worst season since moving to Minnesota in 1961, with a record of 60-102. With the Twins giving so many young players a chance, Terry Felton finally got a full season in the majors to show he belonged. Unfortunately, things did not go well for Felton as he faltered in six starts before being sent to the bullpen.

The losses continued to mount for Terry Felton in the pen as he was 0-10 when he was given the ball in the sixth inning, with the Twins leading the California Angels on August 11, 1982. Tim Launder gave the Twins a 1-0 lead in the fourth inning on a running-scoring ground ball. They added two more in the fifth on a clutch two-out single by Gary Ward. In the sixth inning, Twins starter Jack O’Connor began to tire as Fred Lynn drove home the Angels' first run with a two-out single. Terry Felton came on and got Bobby Grich to pop up to end the rally, stranding two runners on base. The seventh inning started well for Felton as he caught Rod Carew looking to begin the inning. Tim Foli, though reached base with a single. Felton did get Bob Boone to ground out before the roof caved in. After walking Brian Downing, Felton gave up a run-scoring single to Doug DeCinces to make the score 3-2. Billy Gardner took Felton out of the game with the tying and winning runs on base. Jeff Little came on to face Reggie Jackson but ended up loading the bases for a walk, which led to Closer Ron Davis entering the game with two outs and the bases loaded in the seventh inning. Davis would waste no time throwing gas on the fire as Don Baylor hit a grand slam to give California a 6-3 lead, which would stand as the final score. Since Felton put the go-ahead run on base, he was tagged with the loss, becoming the first pitcher in baseball history to lose 14 games without a win to start his career. 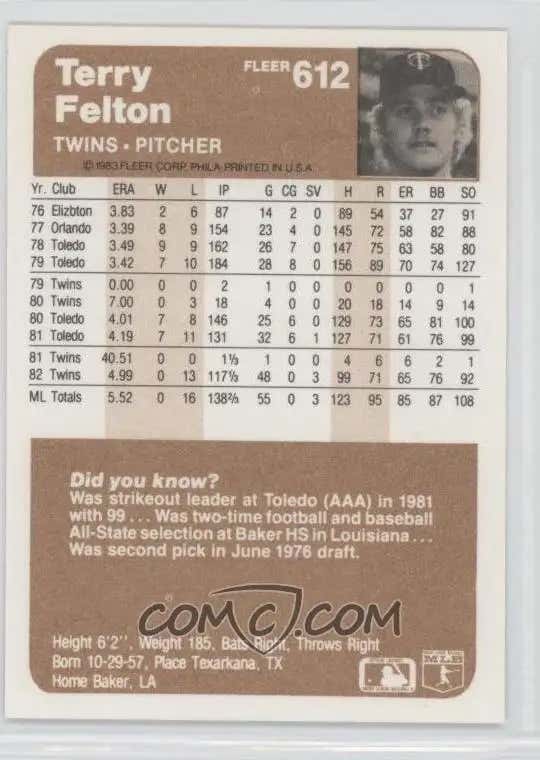 Terry Felton would suffer two more losses in 1982 and finished the season with a record of 0-13 with an ERA of 4.99. Felton was sent back to the minors in 1983 and did not pitch much better, posting a 3-10 with an ERA of 5.24 at AAA Toledo. Released by the Twins origination, Terry Felton made seven appearances with San Antonio, an AA affiliate of the Los Angeles Dodgers, in 1984, as he had an ERA of 7.16 before being released. Terry Felton never again reached the majors, and his record of 0-16 with a 5.53 ERA stands the test of time as the most losses without a win in Major League history. Terry Felton made 55 appearances in four seasons with the Twins. The team’s record in those games was a dubious 6-49. After baseball, Felton returned to Louisiana and had a career in law enforcement, serving in East Baton Rouge Parrish Sheriff’s Office.