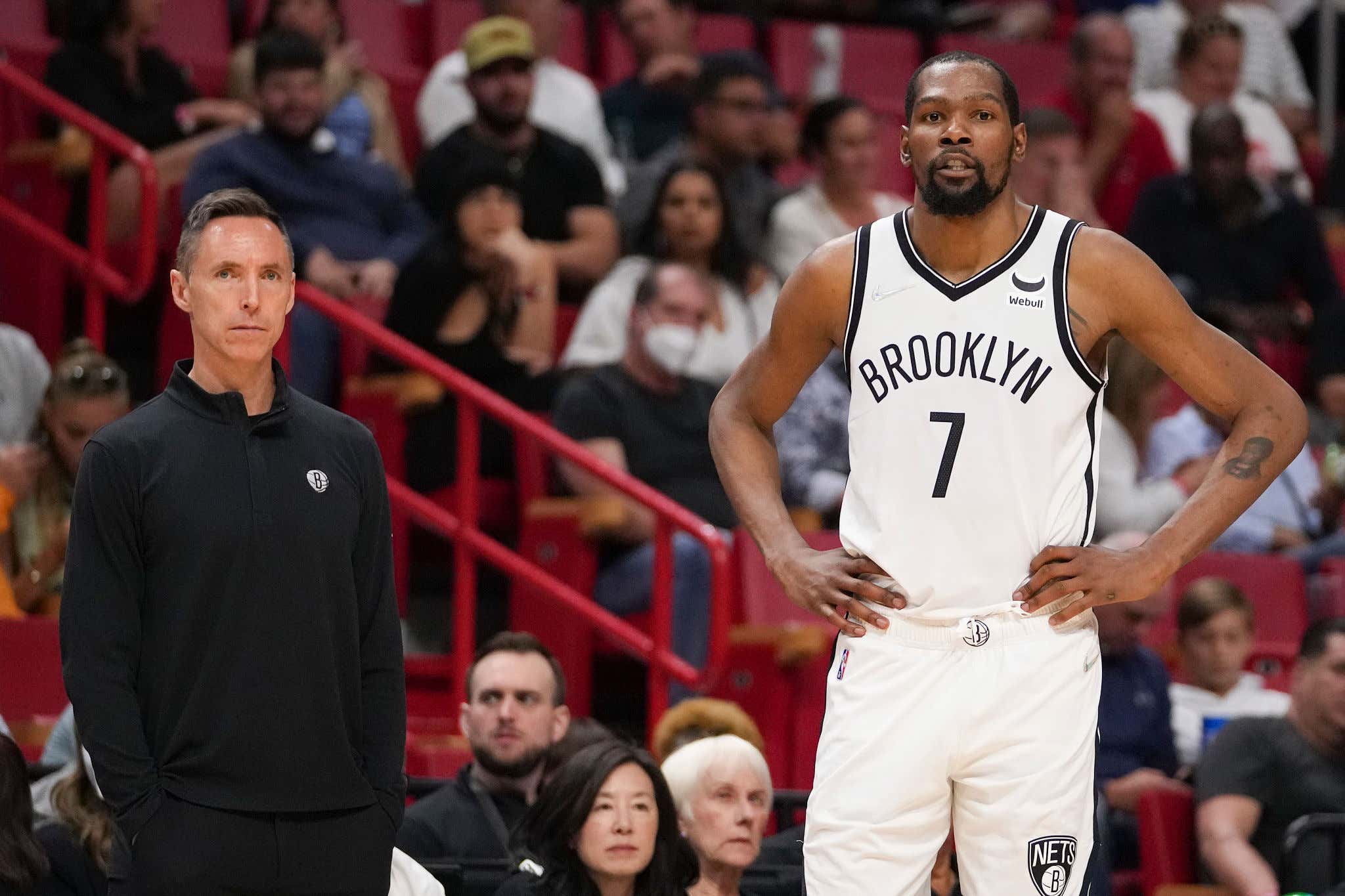 (The Athletic) - In a face-to-face meeting with Brooklyn Nets owner Joe Tsai over the weekend, All-NBA star Kevin Durant reiterated his trade request and informed Tsai that he needs to choose between Durant or the pairing of general manager Sean Marks and coach Steve Nash, sources tell The Athletic.

Durant stated he does not have faith in the team’s direction, sources said.

Durant and Tsai spoke in London on Saturday and sources described the discussion as transparent and professional. The meeting took place a year to the day that Durant agreed to a four-year, $198 million contract extension with the Nets and barely over a month after his initial trade request on June 30. He is now entering the first season of that extension.

The Nets have direct knowledge of the reasons behind Durant’s request, sources said, and understand that the 12-time All-Star will continue to be resolute in his stance. Durant is believed to want a change of scenery heading into his 16th season.

Well that certainly escalated rather quickly! When there was rumblings about how KD was going to meet with the Nets owner about his trade demand, some people out there thought it was going to be a situation where KD maybe decides to withdraw that request. Nope! Not even close!

Instead, he goes out and gives the owner an ultimatum. Either trade me, or fire one of Sean Marks/Steve Nash, if not both. While this might seem like a surprise, let's not forget what leaked out a few weeks ago in July that he actually wanted the Nets to hire Ty Lue. The Nets decided on Nash instead. I think we can now say that's exactly what happened considering this latest news. If KD wanted Nash as the coach, he wouldn't be telling the Nets to fire both him and Sean Marks.

So the question now becomes, what does Joe Tsai do? I think most will agree that this will be Kyrie's last season in BKN. Given that KD has demanded a trade this early into his extension, can you guarantee that he'll be happy and not do this again in the future if you fire both Marks and Nash? Also, training camp opens in like a month, who does KD want to coach this team that's currently out there or on the staff? Could it be Mike D'Antoni? He was on the staff in 2020-21 and it was reported he wants another head coaching gig. Either way, this isn't exactly what you want to deal with ahead of training camp.

While Sean Mark's latest plan of investing everything in Kyrie/Harden/KD hasn't exactly worked out, it's not like he's done a terrible job since taking over the Nets in 2016. He took over a disaster and has made them competitive, getting them to the playoffs in just Year 3. It's his fault that Harden quit, Kyrie became unreliable and KD is suddenly unhappy with the direction of the franchise? He was supposed to be the direction! All they did was bring Durant his friends! You have to ask yourself if the Nets are going to be forced into another rebuild, wouldn't they want Sean Marks around since he successfully rebuilt this team once before?

I'm not sure what I expected to come from that KD meeting, but I don't think I had this type of ultimatum on the table. In a players league, I can understand riding with your franchise player. But that dude is also currently 34 years old and who knows how many games he'll play or if he'll just demand a trade one day anyway. So, I think you now have to trade him? The issue there is the trade returns are not what the Nets have wanted, which is why they continue to leak all this shit in an effort to raise the market price. So far, that hasn't happened.

Do you choose Door #3 and call Durant's bluff? What, is he going to sit out the entire season? That feels a little extreme. But again, he's under contract for 4 more seasons. We're now at the point where players can demand coaches/GM be fired or they'll sit out? That feels like something Adam Silver should probably get involved in. Maybe you try and compromise and fire Nash but keep Marks? I could see that as being an option, especially with all of the uncertainty surrounding the Nets future. My question was, if KD was so unsure about their future, why did he sign an extension? Ah that's right, because it was a fuck ton of money and contracts mean nothing in 2022. He got his guaranteed money so what does he care?

I have no idea how this situation ends, but I can't lie that I've thoroughly enjoyed this dumpster fire. I feel like the Celts are somewhat responsible for it too which is even better. That 4-0 sweep really was the straw that broke the camel's back apparently. Now as long as Brad doesn't bail them out and trade them Jaylen Brown for Durant, I'll looking forward to seeing what the Nets owner does. My gut says he sides with the player or at least convinces him that getting rid of Nash will be enough, and if he's still unhappy they trade him next summer.

But honestly, who the hell knows.