Am I being presumptuous when I call myself Carrie Bradshaw in this situation? No. I've earned it. I live in New York, I write for a living, I'm a hopeless romantic, I wear clothes that are borderline costumes on a daily basis. I've earned this role. As I wait, day in and day out for another season of And Just Like That, where middle aged women try and fit in with today's culture, I think to myself...what would be the most ridiculous storyline they could write for Carrie? I've settled on "getting an OnlyFans."

While I hope this doesn't actually happen solely based on the fact that Carrie still can't work an iPhone in the year 2022, it leaves me wondering...and writing in her voice...what would she do on her page? Moody selfies? Probably not. Moody sultry mirror pics with a cigarette in mens underwear and a tank top that gives Jennifer Aniston a run for her money? Absolutely. Maybe she would post short stories, poems, degrade the men who pay to see what she's doing on a daily basis? I like to think she would've turned the whole thing into a social experiment. And just like that, Carrie has a new closet full of Manolos. The end! Oh and Miranda comes back to newly senile Steve!

Today, I am Carrie Bradshaw. Yesterday, (Lions Gate Portal Day for all my star girlies out there) I said ~*~*yes*~*~ to a new opportunity. Once and for all, someone has got to get to the bottom of this, OnlyFans. I know there are a lot of freaks out there. I know that our guy Glenny Balls has a very successful podcast based on interviewing OnlyFans girls (Subscribe to OnlyStans) and I know that it's been in the news for YEARS now as a smart, albeit "risqué" way to make some money.

For most, it's a place to look at (and pay on a monthly basis for) porn. Over time I've come to realize that it's a lot more than that - people want to know what's going on behind ANY curtain (sheer, velvet, meat) they can get their hands on. The mere IDEA that something salacious might eventually pop up keeps them coming back for more. After our newest boxing queen Alex Bennett made an account exclusively for boxing content to promote her upcoming Rough and Rowdy fight August 19th (buyrnr.com), her Mean Girl counterpart Jordyn Woodruff also decided to make one. After hearing about the results...it's finally time I do the research. I will, with great sacrifice, make an OnlyFans. Starring: ME.

A word from my mother: 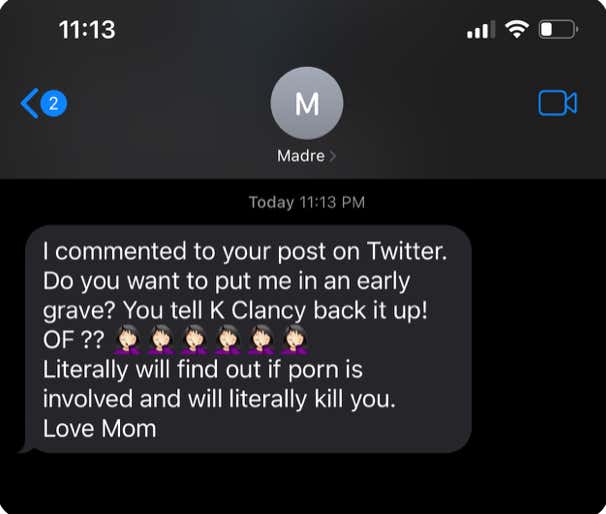 Apparently you're not supposed to screenshot on OF or else you get sued. So don't do that? Be cool. Additionally, (much to my mother's chagrin) I've enlisted The Kevin Clancy one of our Biggest Perverts in house, to help me keep the content as interesting as possible without crossing any of my own personal boundaries. That should be interesting.

All I know, is that I'm excited. Especially for all of the attention. Let's get weird.