There are certain trends in sports that come and go with ferocious speed. Like sleeves on basketball jerseys. They come in out of nowhere and take the game by a stranglehold. All of a sudden every team is wearing sleeves. At first it's still fresh and new and disruptive. You trick yourself into thinking maybe this will be the way moving forward. Then a couple of years go by and everybody hates them and they die out just as quickly as they came. You realize they are gimmicky and everybody decides to just move on.

I'm just going to come out and say it right now....porthole mesh lacrosse jerseys will NOT suffer that same fate. I know that every lacrosse team from U8 to high school to college club to the pros have added a porthole mesh jersey to their uniform lineup over the past few years. It can feel like a bombardment of porthole mesh at times. But make no mistake about it, this is no gimmick. This is a timeless classic. Life pairing a medium rare ribeye with a nice bottle of cab. And anyone out there who thinks we've been seeing too many porthole mesh jerseys in lacrosse lately probably takes their steak well done with a glass of fruit punch. Uncultured swine.

But if you're a man (or woman) of class and dignity, let's take a better look at all 8 of these new jerseys the gentlemen will be wearing this weekend in Denver.

Okay I'll be honest here...we're definitely starting off with the worst of the bunch; I don't know if I'm just colorblind here or not but it looks like we're only dealing with 2 colors on this kit. When you're working with mesh, you need to add another accent color in there or else it ends up just looking like a practice uniform. All they needed was a black outline on the name and number, and then you could even get away with just having the 3 sky blue stripes on the sleeves. It's a shame because the Bulls have a sick color scheme to work with, but they dropped the ball on this one. Grade: D

I couldn't be more proud of the Archers here. Sometimes it's hard to pick the easiest option. Sometimes when you have the exact answer just staring you in the face, you end up overthinking it. The Archers could have easily suffered that fate. But the template was there for the perfect uniform, and they executed it magnificently. 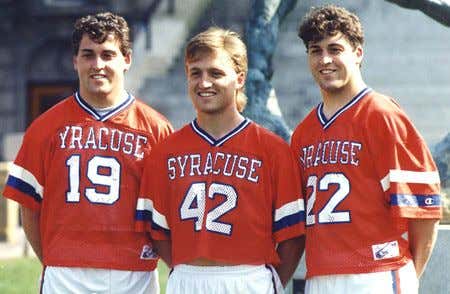 They did just enough with the sleeves to make it their own and honestly? I might prefer that look more. Great colors, timeless design, unreal jersey. Grade: A+

The Cannons get a little advantage on the rest of the league due to the fact that they're the only team where the comically large Champion logo doesn't immediately stick out. It almost looks like it's supposed to be a part of the uniform. Looking back on it now, that's another reason why the Atlas jersey is so bad because the Champion logo is the only thing that really pops. But this set up for the Cannons is elite. It's great use of the red. I'm glad they didn't double outline each of the blue stripes on the sleeves or else that could have been a little too much. The red in the neck is perfect. This should be the uniform that USA ends up going with when lacrosse is in the Olympics in 2028. Grade: A+

Think of any sports movie ever made and then just picture what the villain team in that movie would be wearing. It's these uniforms to a tee. And more often than not, the villain team always looks way sicker than the main team. The only thing I'm worried about here is going to be on gameday execution with what helmets they opt for. If you wear these uniforms with a matte black helmet? That's perfection right there. If you try to get too cute and go with the chrome red bucket? No fucking thank you. So the uniforms themselves are top notch, it just comes down with how they pull it all together tomorrow morning. Grade: A

The Chrome's color scheme works great for a late 80s/early 90s look. But for some reason…this just doesn't feel like it to me. I can't tell exactly what it is, but for some reason this one stands out the most as a new uniform that is trying to look old. Maybe if they went with the teal as the primary color of the jersey? I don't know. It's a great looking jersey, don't get me wrong. But they have a lot going on here and part of me thinks something similar to the Houston Oilers would have played better. Grade: B

The Green Bay Packers have some of the most iconic uniforms in sports. Not shame at all in just going with that entire look. I'll tell you what I really like about the Redwoods and Chaos detailing--the small gap between the numbers and the accent outline. Very minor detail but something about that is working for me. Would also love to see them go with yellow helmets for tonight's game but I have a feeling that would result in some sort of copyright lawsuit. Grade: B+ 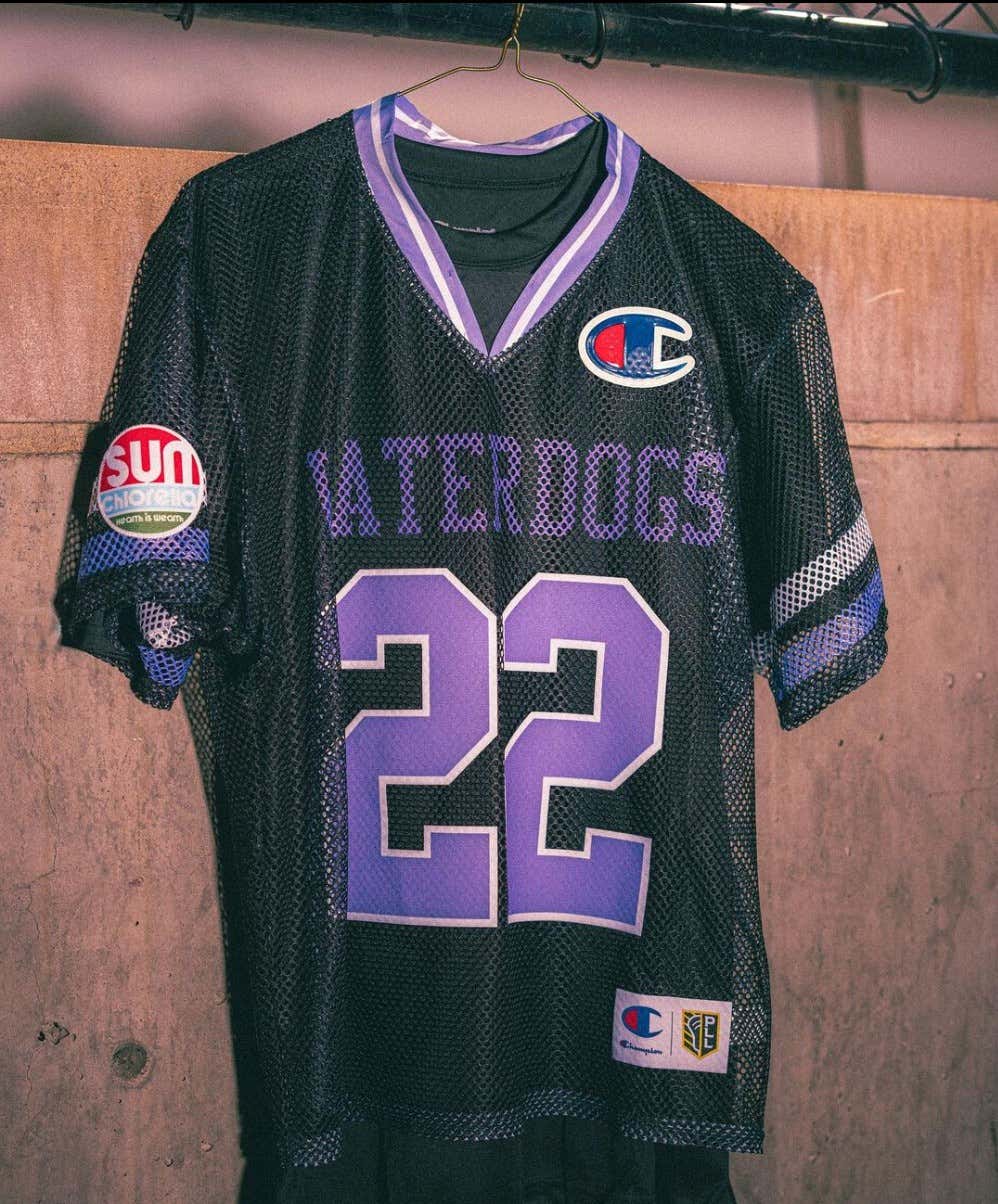 They're good. Don't get me wrong. And I get that the Aqua Pups probably want to shake things up a bit since they already have a couple of purple uniforms. But this seems like a black uniform just to have a black uniform. I don't hate it or anything. And they're also going to get a solid bump during the actual game tomorrow since they'll be going up against the Atlas. But I'm not 100% sold. Helmet choice is also going to be a big factor in this one. I think the whites with the dog paw decal could really play here. Grade: C+ with the potential to get bumped up to a B on game day.

It's essentially the same jersey as the Chrome, sure. But just a little bit cleaner I feel like. Probably because they only have 3 colors going on here instead of the Chrome getting wild with 4. Sometimes you have to trust in the saying that "less is more" (unless you're the Atlas and trust in that saying too much). I think the Whipsnakes set up here is a perfect example of that. So I'll take whatever grade I gave the Chrome and bump them up a notch. Grade: B+

We've got some Friday Night Lights on our hands tonight to kick off week 9 of the PLL season. Word on the street is that it's a disaster in the Cannons locker room right now, and that would make perfect sense considering they're sitting at dead last in the standings after losing their last 6 games in a row. The Redwoods aren't necessarily doing much better, but at least there's some hope for them. If they get a win here, maybe they can get hot rolling into the playoffs. The win over Atlas in Connecticut had to be a confidence booster. They dropped a close one to a hungry Chaos team last week. And guys like Myles Jones and Sergio Perkovic will be able to shoot the shit out of the ball in the Mile High City. So for the rest of us on the East Coast, we've got a late one on our hands here but I think there's going to be a ton of action to keep you up. Give me Over 24.5 and Redwoods -1.5.

The first game of a triple header on Saturday. And this one is going to be bright and early for the boys in Denver because it's a 9:30am start local time. Early wakeup call, quick coffee run, and then it's pretty much go time.

Chaos desperately needed a win last week and they got it. If they went into this week sitting at 1-6, you'd have to imagine that heads would be rolling. The roster would get a shakeup. Guys would be playing tight. Little mistakes would quickly avalanche into a full blown meltdown. But since they got that win under their belt, they can come into this Denver game looser. We saw a 7 point game out of Dhane Smith, a 4-goal game out of Josh Byrne, and 14 saves out of Blaze Riorden. The last 4 games for the Chrome have all been 1-goal games. They are 1-3 in that stretch. So something just isn't clicking there lately, now they're playing against a Chaos team that has a little confidence. I'm going to stay on Chaos ML and the Under since the boys are still going to be a little sleepy.

The Atlas bounced back after that loss to the Redwoods with an absolute dick kicking against the Archers. Baptiste went 65% on faceoffs, Concannon was 59% in cage, and Jeff Teat led the way with 2+4. So when the Atlas have everybody going, they're impossible to keep up with. The Waterdogs are on a nice little run here winning their last 4 games in a row. But the past 3 of those have been by 1-goal. If they can start to unload from 2-point range then maybe there's a chance they keep this one tight. But I like the Atlas in this one pretty big. Especially with Baptiste taking draws on a faceoff stripe he's very familiar with. Make it, take it. Atlas -1.5.

The Whipsnakes have 6 wins by a combined 9 goals. Unless they're playing the Atlas, who they just seem to completely dismantle every time they play against each other, they are addicted to winning 1-goal games. They're going to get the dub, but they're never going to blow you out of the water. So Archers +1.5 is as close to a lock as you're going to get this week, and I wouldn't count ML out of the picture either. The Whipsnakes are already locked into the playoffs. They can get into cruise control here for the final few weeks of the regular season. Archers are fighting for seeding. So if you're feeling frisky, jump on the moneyline.