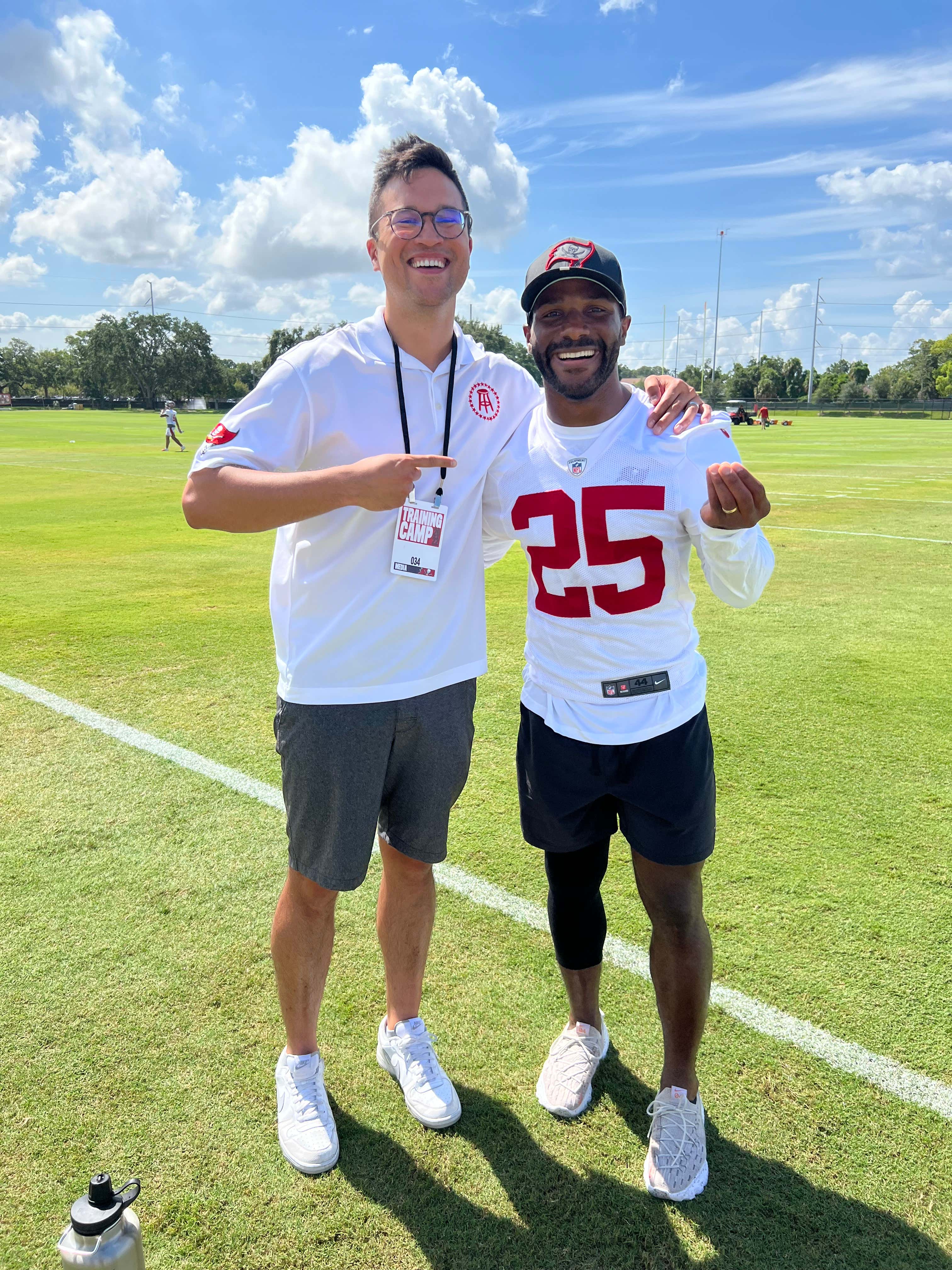 I flew into Tampa on Sunday evening knowing I had 49 hours to both have fun and show that I could actually produce some quality stuff as this was technically my first trip as a full-time content guy. The idea was just to hopefully utilize the connections I've made over the years to get close enough to hopefully meet Tom Brady. I had other ideas, but that was my main objective in addition to catching up with my buddies in the organization. I had made the trip down there in 2019, the season before Tom Brady had signed, and before the pandemic and it was a trip for the ages. One I'll never forget. It was my first time meeting a lot of those guys and I've honestly become friends with a bunch of people down there since then, so to be in a position now where I have better relationships AND the team is actually very good was really exciting to me. I got in Sunday evening a little after 5pm and headed to my very inexpensive VRBO within a mile of the stadium/practice facility area. After checking in I met up with my friend, Scott Reynolds who runs PewterReport which is my favorite site for Bucs news.

We had a fun discussion about the team, some funny stories from the past and where we saw things shaking out. A couple hours later, I made it back to the pool house without a pool I rented for a good night's sleep. Except I couldn't really sleep. I had some editing to do to Fantasy Football Factory, which I'm now producing. I worked on that til about midnight and hit they hay.

That night I'm not even kidding I had a dream that Chris Berman came into my room at 3:55am and said, "c'mon, Football season is here!" I distinctly remember a bunch of legends like Tom Jackson, Keyshawn Johnson, Chris Mortensen, and other espn personalities walking through a door that Boomer was urging I followed him to. My alarm woke me up at 6:00 and it was time to go to camp!

It was a beautiful Monday morning and I decided to take the long way and walk by the stadium. I was getting goosebumps just seeing the players on billboards on the sides of the stadium. The mind was feeling good for a great day at camp. I got in at 7:30am, which is when doors opened.

Nobody was out there yet, but soon Nick Leverett, who will be competing for the starting Center spot after Ryan Jensen was out snapping balls to an audience of about 20. I was loving every minute of it.

Practice was great. To be so close was a real treat.

While it doesn't look like much, it was the tops for me.

But I knew I was working, so I was locked in trying to get the best shots.

The low key coolest moment of the trip may have been the Bucs new Defensive Quality Control Coach coming over mid-practice to say he's a fan of mine. What an awesome way to start the trip!

Once practice concluded I had a decision to make. I had a wristband that would get me on the field to mingle with coaches, players, and front office people, but I also had a media credential for press conferences. I knew I had two days there and word on the street was that Tom Brady was speaking on Monday. He did have the power to move that last minute, so I was hoping he was up to answer some hard hitting questions as I chose to forego most of the socializing to attend pressers. Todd Bowles was first. It was cool just being a fly on the wall. I watch every single press conference on YouTube, so being in the audience, able to ask questions was surreal.

Bucs Cornerback Carlton Davis was on deck in the waiting area so Tom's attendance was in question. But luckily, we got word he'd be there in a moment and in walked the GOAT. I was kind of freaking out.

The night before, I had heard Tom was scheduled to speak and spent a good deal of time with my buddy Joey Langone, who does social at Barstool, asking what would pop. We spent some time and crafted a question, but in the morning I woke up and scrapped it. I knew I had to just hit him with a Giovani Bernard. I was super nervous as having just been in the press area for the first time, there was no order. No hand raising, no people coordinating, just kind of shout out your question. I figured I had about eight minutes with him, but didn't want to ask a potentially dumb question early, so I sat on it for about four minutes. I had decided my question was going to be, "How is the backfield depth with Leonard Fournette, Rachaad White, Ke'Shawn Vaughn, and GIOVANI BERNARD?" But for the next two and a half minutes I wasn't able to get it in. And right when I thought it was my turn a guy in front of my asked about Leonard Fournette. Dagger. Luckily, Tom answered it very quickly and I hoped in piggybacking that question. The results were ideal to say the least.

I was so excited and it went so perfectly that the rest of the trip was gravy. After pressers, I met with the Buccaneers fantastic social team and bounced some ideas off of each other. That's where the idea for meeting Giovani Bernard came from and we set that up for the next day.

On the field, I was lucky enough to also meet Tom's Body Coach, Alex Guerrero who was awesome and actually set me up with an appointment at TB12 Tampa later that afternoon.

It was a delightful appointment. It's not about getting jacked, but more about living a healthy lifestyle. After my session, I found out I've been walking incorrectly my entire life. Not engaging my glutes and overemphasizing my hamstrings.

Luckily they gave me some exercises to help improve my form.

That night I had a bunch of work to do in the form of blogs and other stuff, but the next day I had to get a lot more stuff.

The alarm went off at 6am on Tuesday and the goal was to crush the Giovani Bernard video and I also texted Ryan Griffin who is actually the longest tenured Buccaneers Quarterback to see if he'd be cool throwing me a couple passes after practice. The Buccaneers have an awesome Video Guy, Stephen Lynch that produces In The Current and Below The Surface, which are two Hard Knocks style shows that air during the year. I have become friendly with him and asked him to film it and he was all about it.

Practice that day was more about mingling with my friends I didn't get to talk with on Day 1 and I got some good info on this year's team. 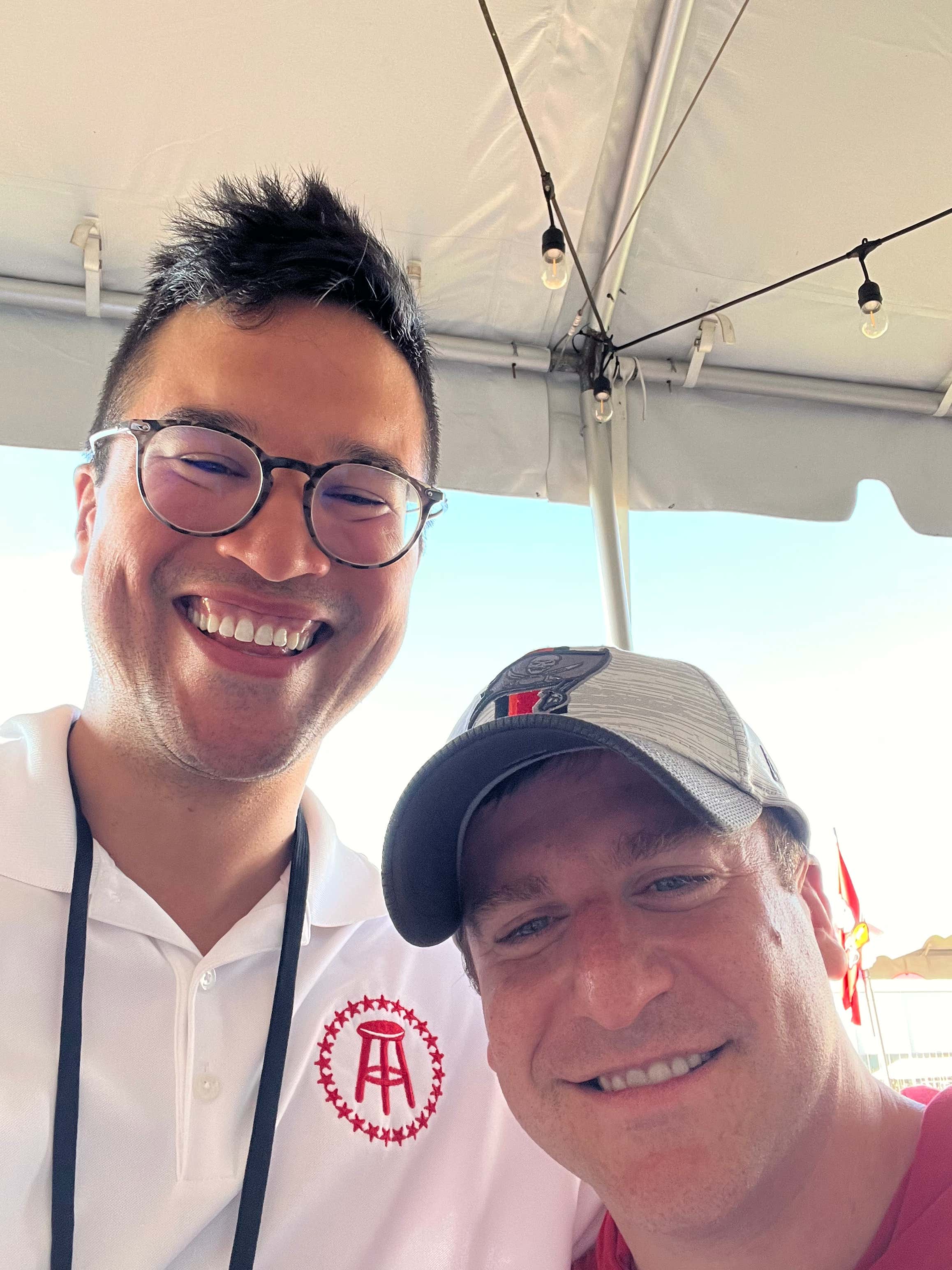 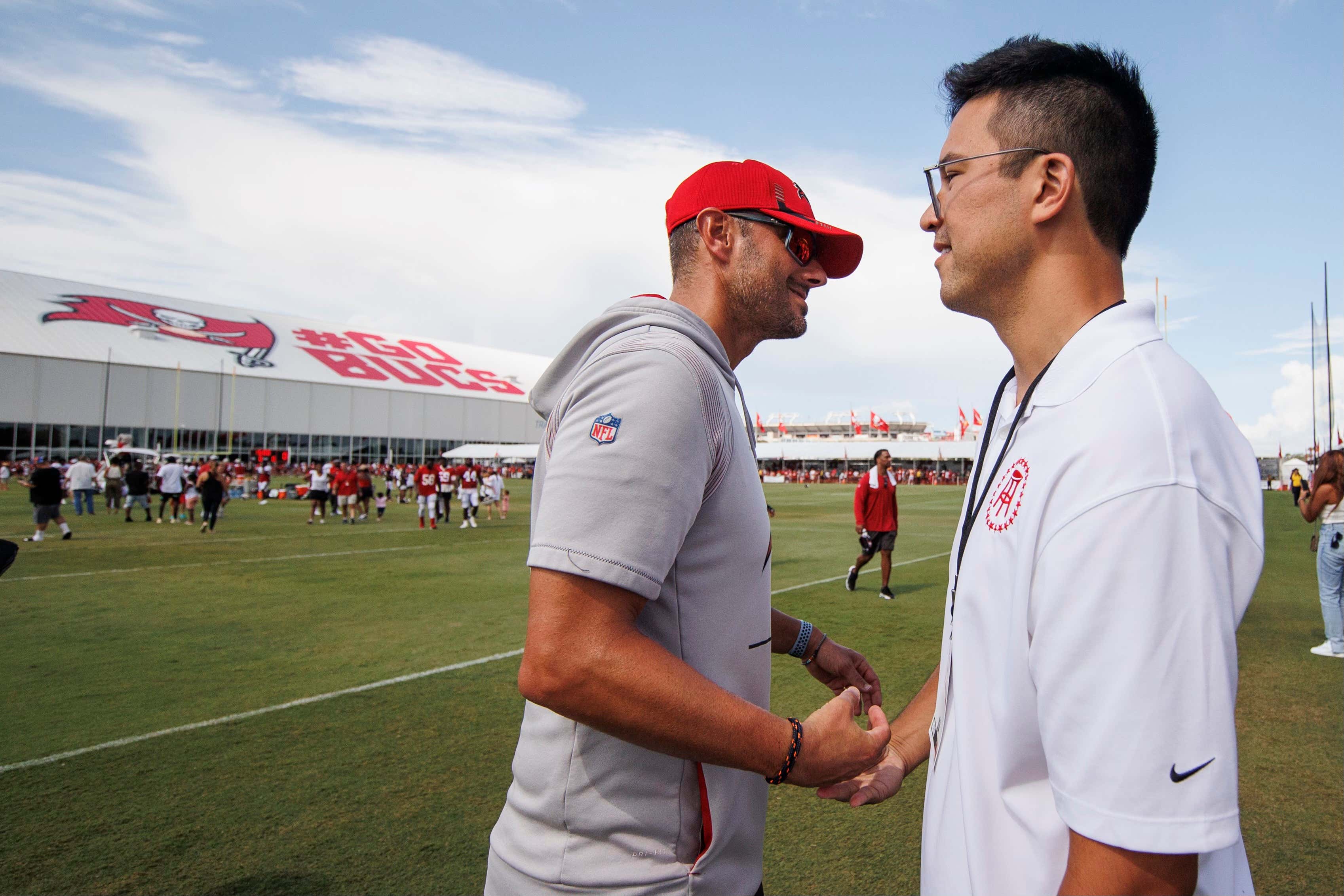 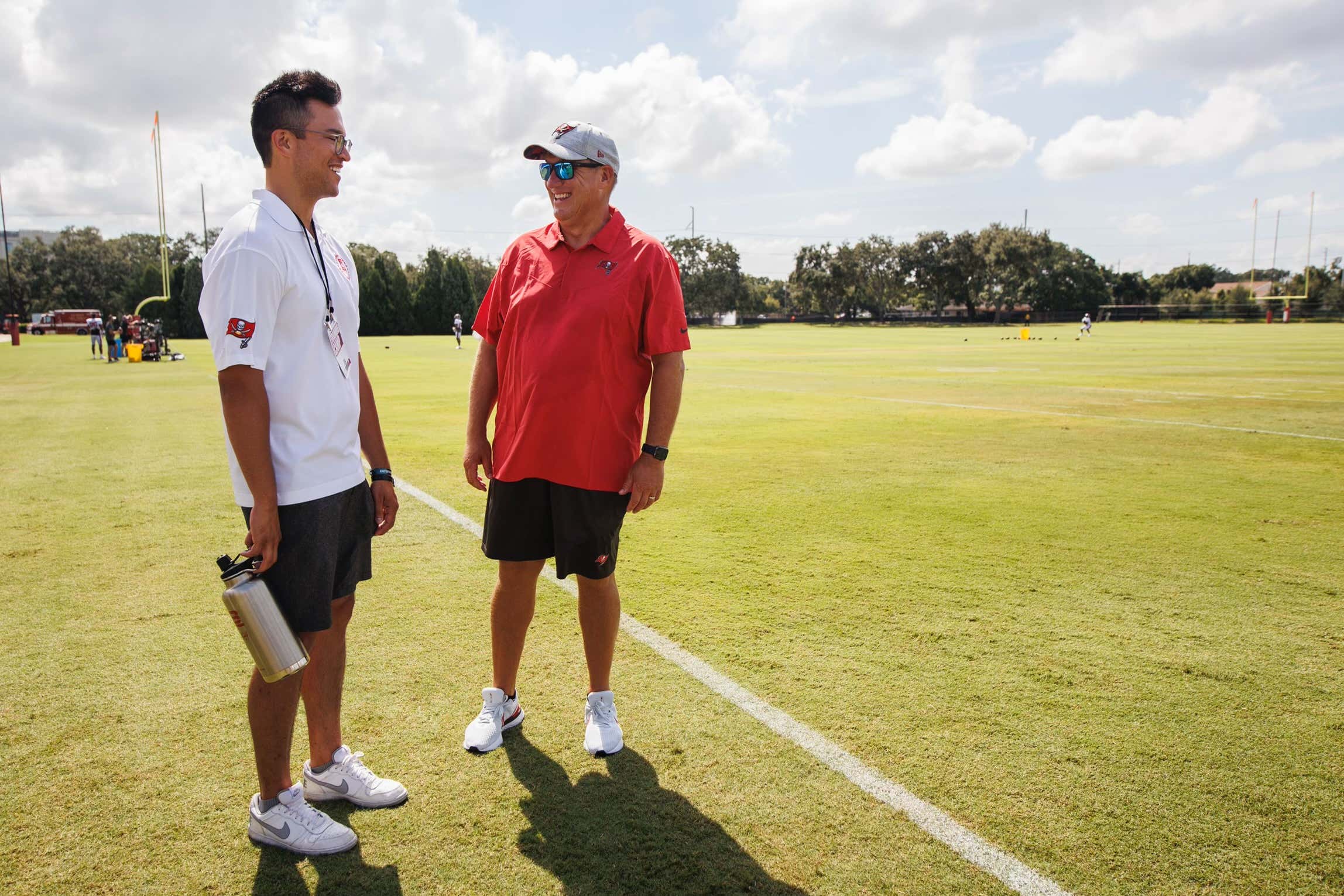 After practice, I went onto the field and the Giovani Bernard meeting went flawlessly. He was actually sitting out practice, but Jill Beckman, the fantastic social person for the Bucs ran to get him and he was cool with the concept.

He told me he's not big on social media, but his friends sent him my videos a bunch.

We knocked that out quickly and I caught up with my pals Cam Brate and Pat O'Connor. But I had to run to the field to catch some balls with Ryan Griffin. Full transparency, this wasn't the first take. I did however catch the first ball, but it came in so hard that it jarred my glasses loose and they fell off. To not look like a total dweeb elected to re-shoot it. The finished product is maybe my favorite video ever.

You can't really see the route in the video, but I had to throw the hand up, Randy Moss style once I had a step.

I gave Ryan the ball back after my score, but he asked me if I wanted to keep it, which of course I did. Luckily, most players were still making their way off the field and mingling so I was able to get Mike Evans to toss me the ball like I had always hoped he would.

Leonard Fournette was doing media availability, which I skipped after practice to do all that other stuff, but I was able to run a quick idea by him as he left the field. He knew what was up when I said I was with Barstool. He needs to get those blog numbers up!

Antoine Winfield Jr. was also taking some reps on the JUGGS machine after practice and I was lucky enough to chat with him briefly before heading into the locker room. Winfield was the one that savagely threw up the dueces to Tyreek Hill after Super Bowl LV was in hand. 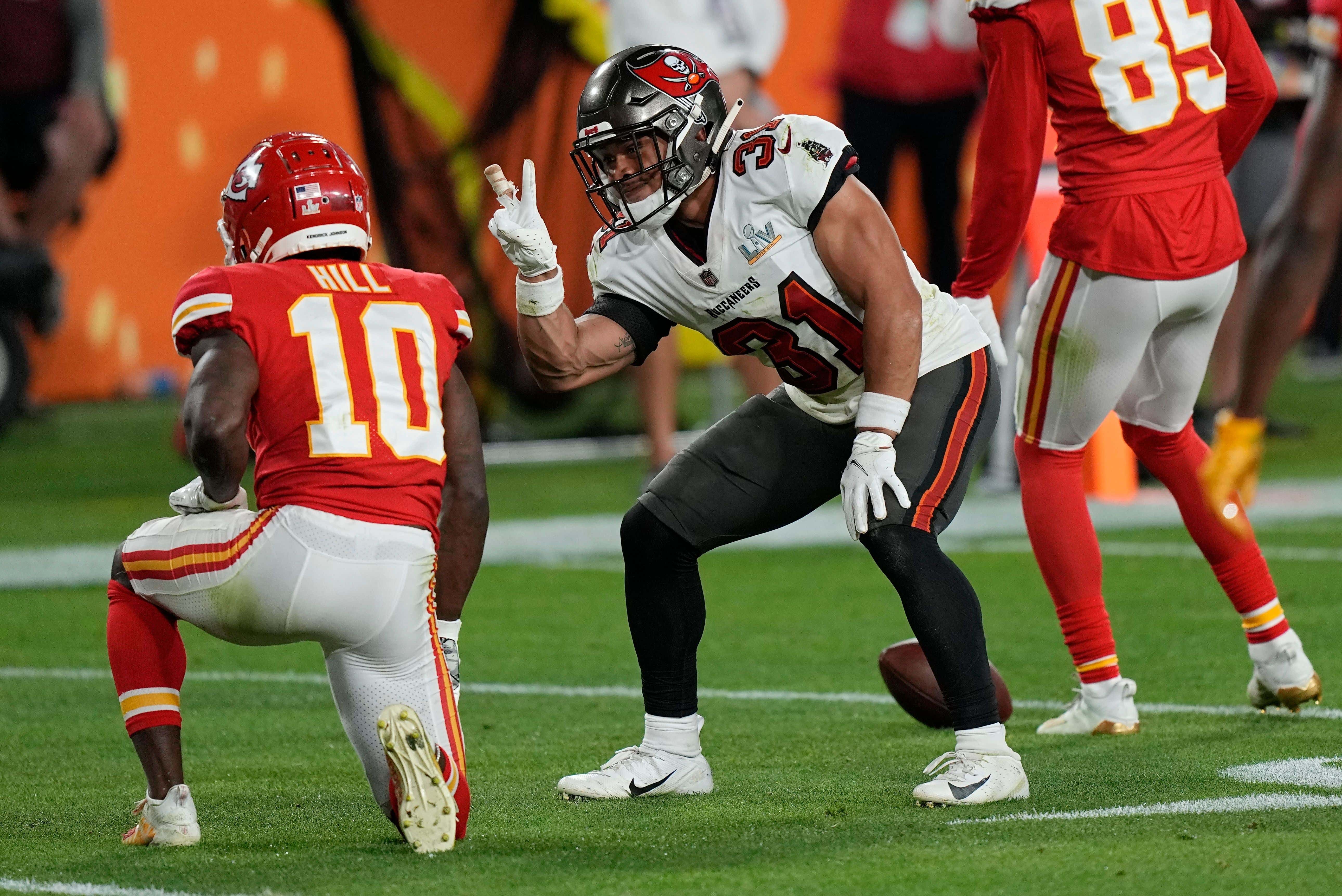 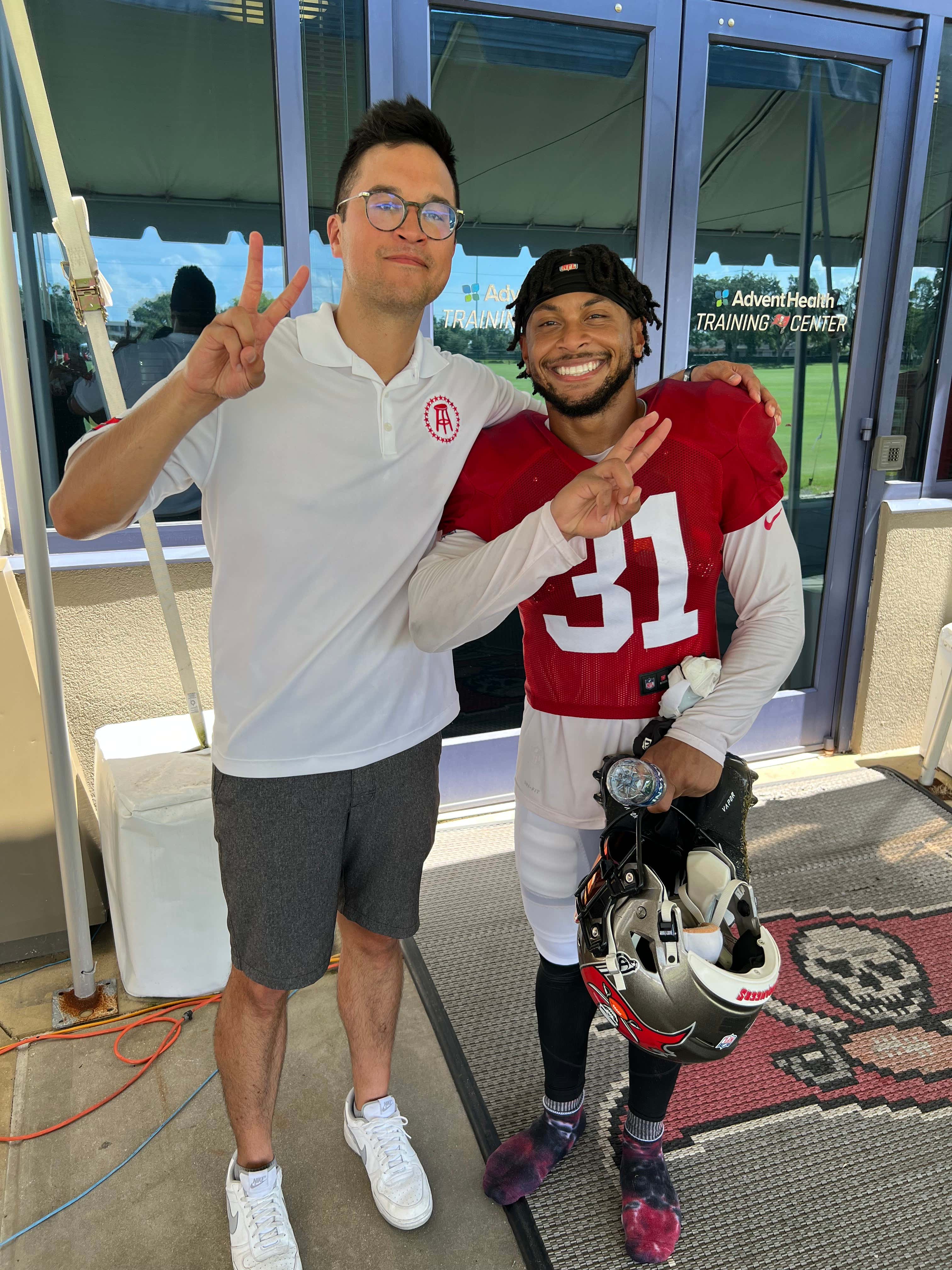 I left practice to get lunch with my friends from the Loose Cannons podcast and then parted ways to do a couple of radio hits and then the airport. It was a great trip and I was happy to make the most of it.

On a real note, the fact that I had three days in a row I had different videos that each got over one million views was more than I could have ever hoped for and I'm grateful to everyone that followed along and anyone that made it to the end of this wildly long blog.

The Entire Buccaneers Organization and everyone at TB12 for their help in making this week so memorable. They really rolled out the red carpet for me and I'm forever grateful. Go Bucs!