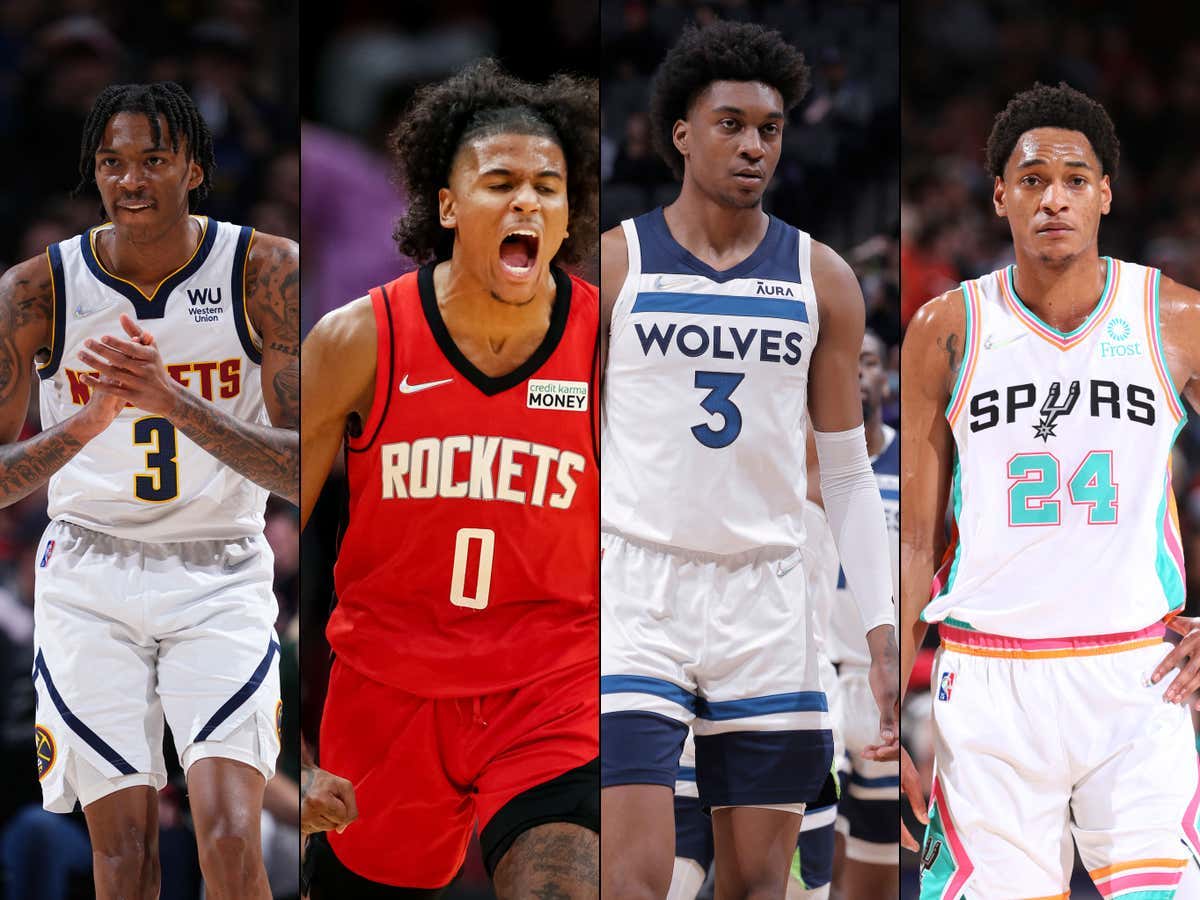 Seeing as how there isn't shit going on in terms of NBA news right now, I find my brain starting to wander thinking about the upcoming 2022-23 season. One of my favorite things to do is look around the league and try and come up with who I think is about to have that every important NBA leap. I've blogged about this leap before, but you usually see it in Year 3 or 4 with some special cases coming in Year 2. The thing with the Year 2 leap is that most rookies get better after their initial season, so it's really the Year 3 that you should pay attention to.

Am I perhaps the only person on the planet who is even thinking about this on August 4th? Yes. I have never denied my deranged brain, this is what I spend my time doing. It's not a life I would generally recommend to anyone, but I am who I am.

So what does this "leap" look like? Think of the seasons we just saw from guys like Darius Garland, Tyrese Maxey, Tyler Herro, Desmond Bane etc. You know it when you see it. It's where you go from being "pretty damn good" to right around All Star level. As we saw with Garland, he actually made it. Of course, roster construction and opportunity help play into this leap", which is what I wanted to focus on for my list. So, I went through and picked out some young guys who I am very excited to see this upcoming season because I truly believe each one is going to give us that important "leap". You're not doing anything else right now, so let's talk about it.

OK, I know I'm immediately breaking my own "rule" here and going with a Year 2 guy, but just ignore that for a second. I see Green's leap being similar to what we saw with someone like Maxey in his Year 2. Essentialy, while he may not make an All Star team, we could get close to All Star type production now that he's gotten a taste of the NBA game.

I don't think it should shock anyone if we see Green's scoring take a massive step forward next year, because when you look at where he struggled from the floor last season, I would imagine a more experienced/stronger player will correct those issues. Just see for yourself

Look at how poor that FG% is from 3-16ft. You're telling me that's not going to get drastically better given his athleticism? An improvement in that area could easily take his 17 ppg and bring it to 20+ and that's only the first part of where I think his offensive leap comes from. It's not really that uncommon that super athletes like Green struggle around the rim early, and then when they come back stronger and wiser suddenly their production in that zone looks a whole lot better. An improved floater would do wonders for his game.

But so would getting to the FT line. As a rookie, Green only had a .245 FTAr. He took only 3.5 a game. I don't see why that can't improve as well now that he won't be getting a rookie whistle. So when you add in some potential improvement in the paint and some additional FTs, would it shock you if Jalen Green bumped his scoring to 22-25 a game?

On the other side of the ball, it's hard to be worse defensively so any improvement on that end is going to make a pretty substantial difference as well. Remember, he was 19 years old his rookie year. Last year was the worst he's ever going to be, so I think it's fair to expect a pretty big leap.

You want a Year 3 guy who I expect to take a leap? Look no further than Devin Vassell. This is one of those unique combinations of a guy having some natural development, but also all the opportunity in the world. I'm not sure you noticed, but the Spurs have basically told the world they are entering a rebuild. They traded Derrick White, they traded Dejounte Murray. This team really only has Keldon Johnson and Vassell left and someone is going to have to shoot the ball.

Last year we saw Vassell start 32 games (played in 71) and he took only 10.8 FGA a night. That number is going to explode this season. If you look at their 2021-22 roster, every player who took more shots than Vassell outside of Keldon Johnson is gone. Murray (18.3), White (11.6), and Walker IV (10.9) are no longer there. In looking at their 2022 roster, there is not a player other than Johnson who I see taking more shots a game. Josh Richardson will probably live around 9-10 FGA, who knows if we'll ever see Romeo, and Tre Jones isn't exactly a shoot first point guard.

So when you combine the situation with the fact that we saw a little "pre-leap" in Vassell's Year 2 last season, I'm almost at the point where barring injury, you can take a breakout season from him to the bank. He shot 37% from three as a starter last year and was 90% from the line. The Spurs may lose a shit ton next year, but Vassell is going to get his.

Now I know what you may be thinking.

"Greenie, Haliburton is already really good! Why is he on this list?"

You'd be correct. Haliburton was really good in his Year 2. I'm simply saying I don't think he's taken his "leap" yet. I'm putting him in that Darius Garland category. Garland was really solid in his Year 2 and averaged 17/2/6 with 1.9 3PM a night. He then exploded in Year 3 and made the All Star team.

We saw signs of it as soon as Haliburton got traded to the Pacers where he no longer had to share point guard duties with De'Aaron Fox. His numbers bumped up to 17.5/4.3/9.6 on 50/41% and 2.2 3PM over those 26 games in IND. Would it be such a crazy statement to suggest that Haliburton could end up being a top 3-5 point guard in the East next year? For reference, his 9.7 assists as a Pacer ranked 3rd in the East among PGs (Harden, and Trae). What's so impressive about Haliburton isn't just his passing, but it's his efficiency. It's not like he's a low volume shooter and has those splits, he took 12 FGA and 5 3PA as a Pacer.

Now with Brogdon out of the picture, only Buddy Hield is left in terms of guys who took more FGA (15.6). I don't see any reason why Haliburton won't up his shooting by 3-5 shots a game. If he also finds a way to get to the line more (3.3 FTA) this could easily be a 20/10 player. He may not make the All Star team like Garland did, but if someone gets hurt or something? I could easily see him being a replacement guy.

OK, I know this is another Year 2 guy, but I have to mention Bones. When you think of Bones Hyland, one thing should immediately come to mind.

The man is the very definition of electric.

The reason I wanted to include him here isn't just because of the natural development, but like Devin Vassell, a big part of his Year 2 is going to be about his new opportunity. Now that the Nuggets traded away Monte Morris and Facu is no longer around, Bones slides in as the primary backup to Jamal Murray. When Murray was healthy, Monte Morris played around 25 minutes a night. For reference, Bones played 19 minutes a night as a rookie last year. One can assume that his floortime is about to spike, especially since I imagine the Nuggets are going to be careful with Murray after he missed the entire season recovering from his ACL.

We know the 3pt shooting is legit, but Year 2 is when I expect to see his overall efficiency improve as he was very similar to Jalen Green in that he really struggled from 3-16 ft

Add in his 1.8 FTA last year and that's another area that should improve as he gets more minutes. This is a guy that the Nuggets trusted enough to play 17 minutes a night in the postseason as a rookie, and they then went out this summer and made roster moves to open up a path to the floor.

I also think the return or guys like Murray and MPJ are only going to help guys like Bones. Having one of those guys (or both) with him in bench lineups makes things much easier for him as a scorer. Last year, outside of Jokic, who were defenses really worried about offensively? So just add it all up. Another year wiser/stronger, more minutes, and better talent around him all add up to a very legit "leap" opportunity.

McDaniels is another Year 3 guy who I expect to have a legit "leap" season. Part of that has to do with him sliding in as a starter )he started 31 games last year), but also I think it has more to do with his position change. Last year, McDaniels spent 67% of his minutes as the PF for the Wolves. As you can imagine, that's not going to be the case now that they just traded for Rudy Gobert. KAT is going to slide to the 4 and McDaniels to the 3. They unloaded Malik Beasley and I'm kind of assuming they don't start Kyle Anderson at the 3 over McDaniels. At least they shouldn't.

The biggest thing for McDaniels to figure out if this leap is going to happen is his outside shooting, especially if he's now going to spend more minutes out on the perimeter. If you look at his shot chart last year, it's not that pretty when it comes to three point shooting 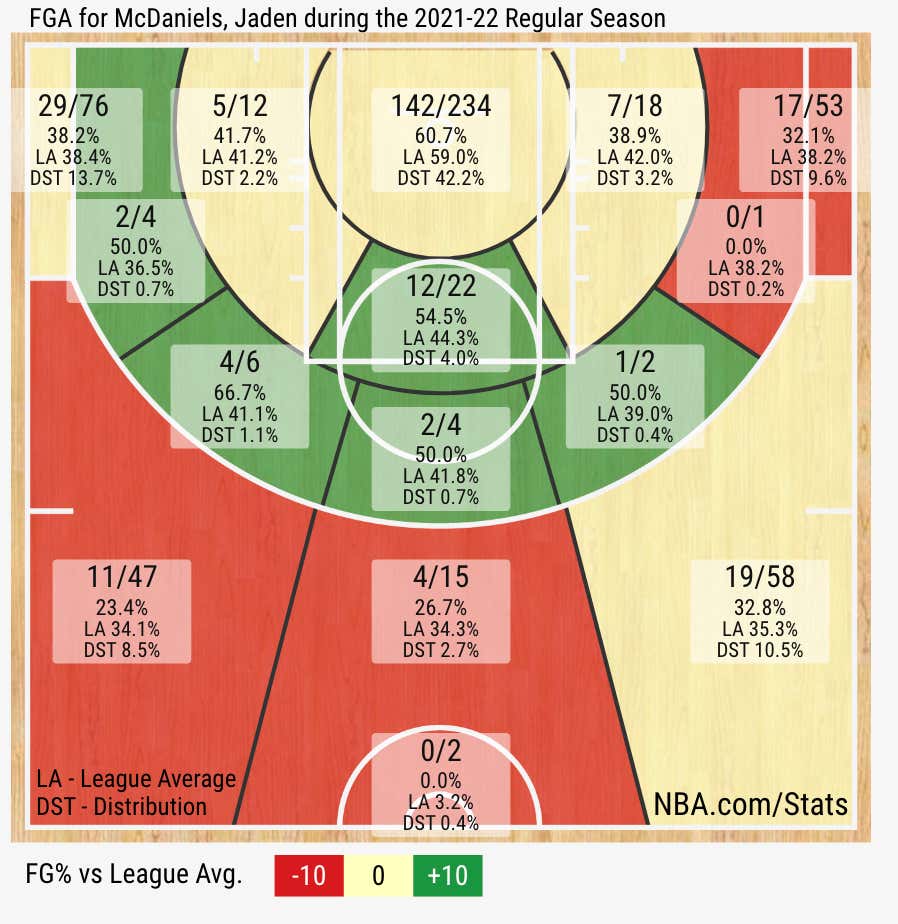 He only shot 31% on catch & shoot situations last season so that's obviously going to have to get a whole lot better. But I do think with the leap guys like Ant will make and then playing off KAT should help. Remember, this is a kid that shot 50% from three on 3.3 3PA in the postseason last year. The foundation is there. He's still young as shit and when you look at the jump he made from Year 1 to Year 2, it screams a legit Year 3 leap. His minutes are going up, his shots are going up, the position switch, the fact that I think the Wolves as a team are going to take another step forward now that their defense has been addressed, it all adds up to a breakout year for McDaniels in my opinion.

Of course, these aren't the only young guys who are sure to take that "leap" next year, so now I'll open it up to you all. Who is a guy who you could see making that big time leap next year? Someone that showed flashes last year and now is going to have that breakout season? Let's hear em.