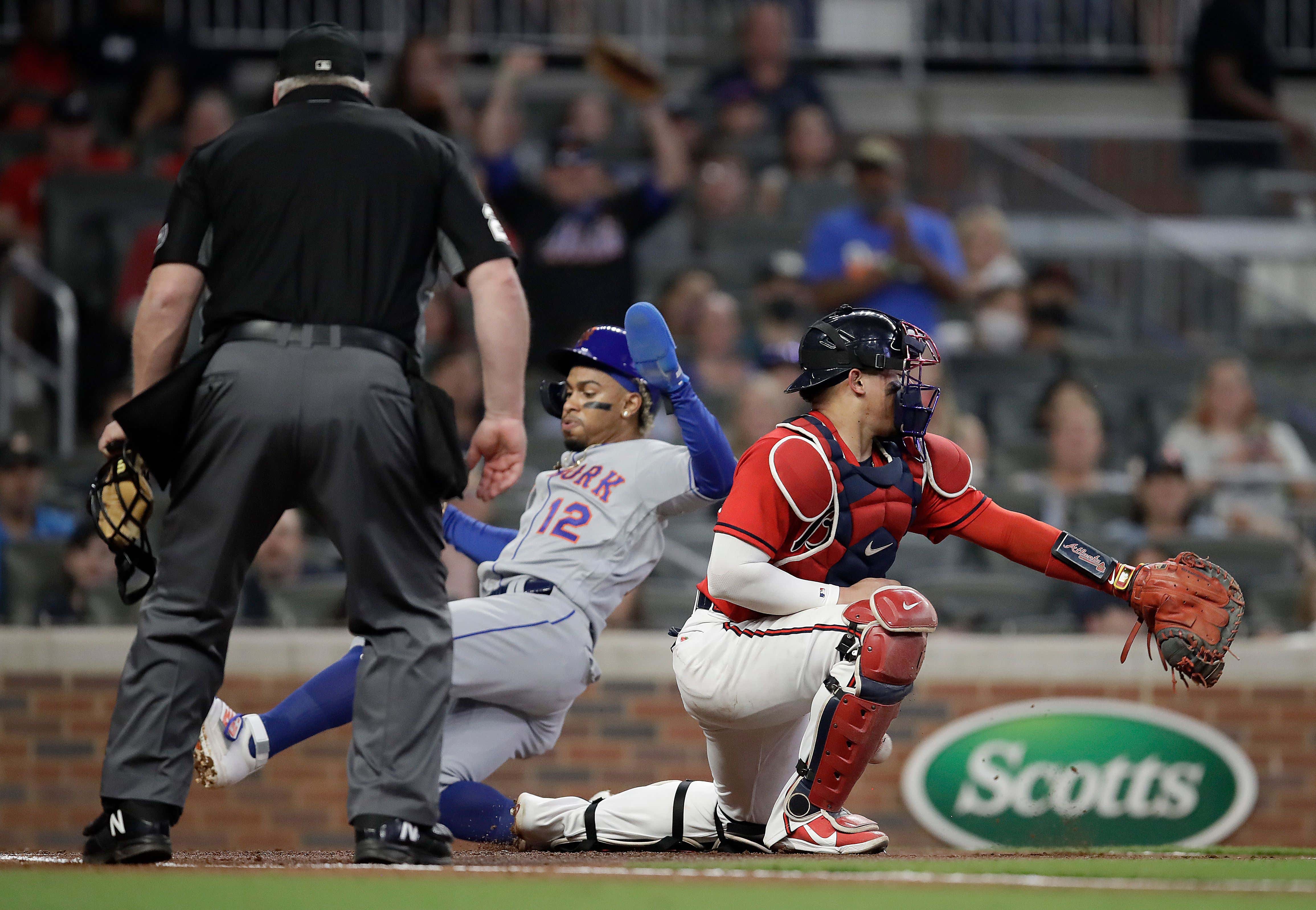 I'm not sure which dated, overused movie reference you guys would prefer when it comes to this extremely big series about to kick off. So I'll include them both below.

No matter who you root for, the two best teams in the National League East squaring off for a very normal five-game series is cool as shit. The 66-38 first place Mets are trying to hold off the collapse that half the internet has been telling us is coming FOREVER while the Braves try to take the NL East throne after winning roughly a million games in a row against the doldrums of baseball, having a parade throw for them by their fans on the internet, yet are still looking up at the Mets in the standings.

Needless to say, Citi Field is going to be a zoo the next four days, with Saturday night being especially the case with it being Barstool At The Ballpark.

To raise the stakes even more, Frank The Tank's Twitter ban on tweeting negative things about the Mets can be extended through the playoffs if the Mets don't get swept as he said they would following the trade deadline. 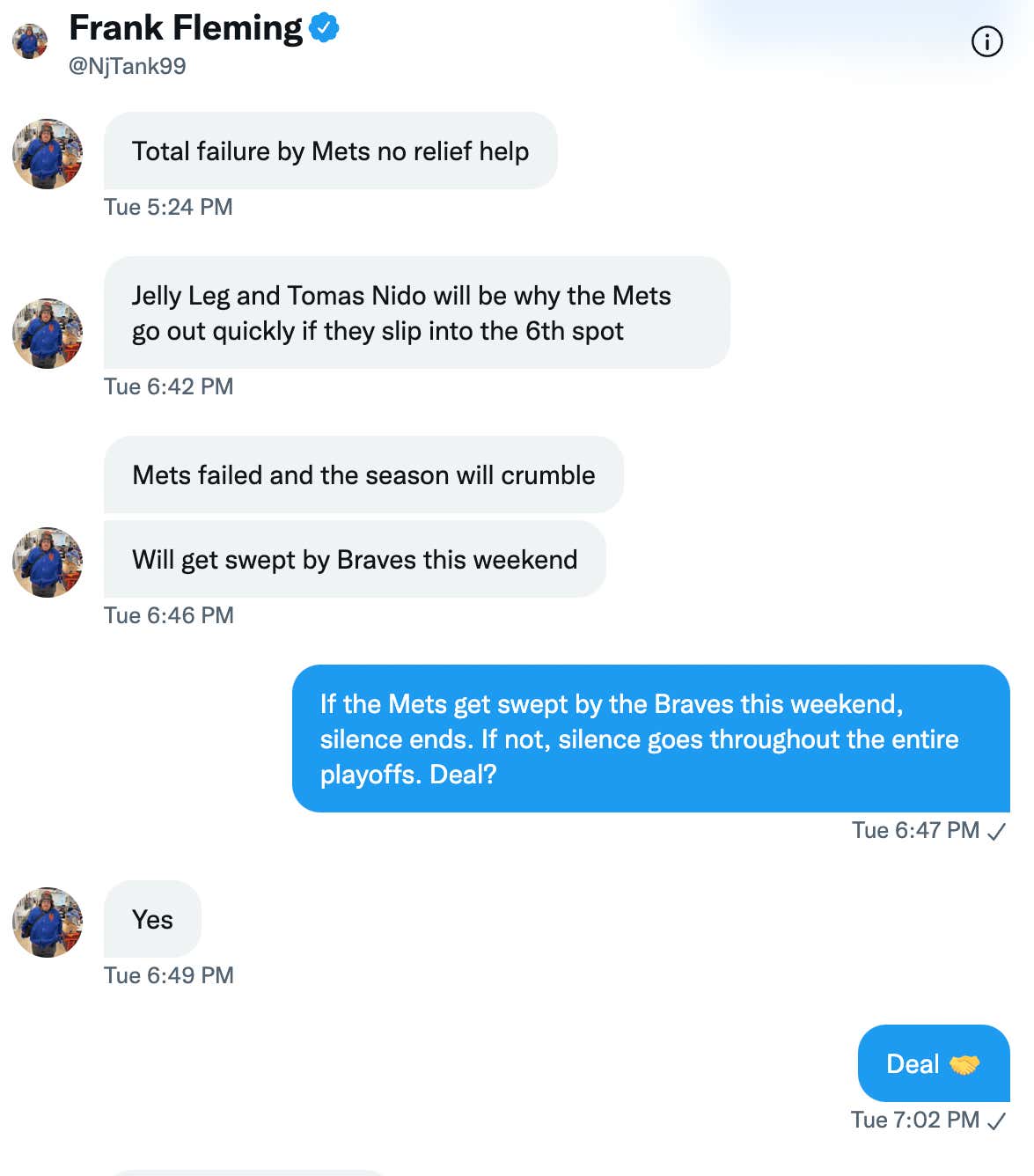 Some people may find this deal excessive.

However, as someone that works for the wonderful Penn Entertainment company that is the home of the WONDERFUL Barstool Sportsbook, a bet is a bet once it is agreed upon.

When I first got Frank off of Twitter for the rest of July, my end of the bet was I wouldn't be allowed to drink anything but water for the rest of the month if I lost. No soda. No John Daly cocktails. No ice cold, refreshing Coors Lights with mountains bluer than a Mets hat. I describe all the bets Frank not only made but pretty much came up with on his own during his rants in my DMs here:

#Frank kept being #Wrong, which led to him making double or nothing, triple or nothing, and now quadruple or nothing bets in order to let his negative rants fly in tweet form. Frank can still tweet anything he wants about anything, but he just can't be negative about the Mets, which shouldn't be too hard since they are 28 GAMES ABOVE .500, HAVE A +102 RUN DIFFERENTIAL, AND HAVE BEEN IN FIRST PLACE FOR ALMOST THE ENTIRE SEASON. If you need your Frank The Crank negativity fix, you can follow his TikTok or YouTube, which are not part of this bet.

Unleashing Frank onto Twitter after a five-game sweep by the Braves would be worse for any true Mets fan that pretty much anything else that can happen to an already historically beaten down fanbase. But this is the deal we are going to have to hope pans out for all of our sanity, especially since I will be stuck in a room with him for playoff streams this October, which will only lead to his Twitter negativity being repurposed into audio form known as screaming.

Blogger's Note: The Mets won the very next game 9-5

So we'll see what the NL East and my Twitter timeline looks like following this five-game series. Could be good, could be bad, could be utter hell, even though stats like this say the Mets may just be okay.