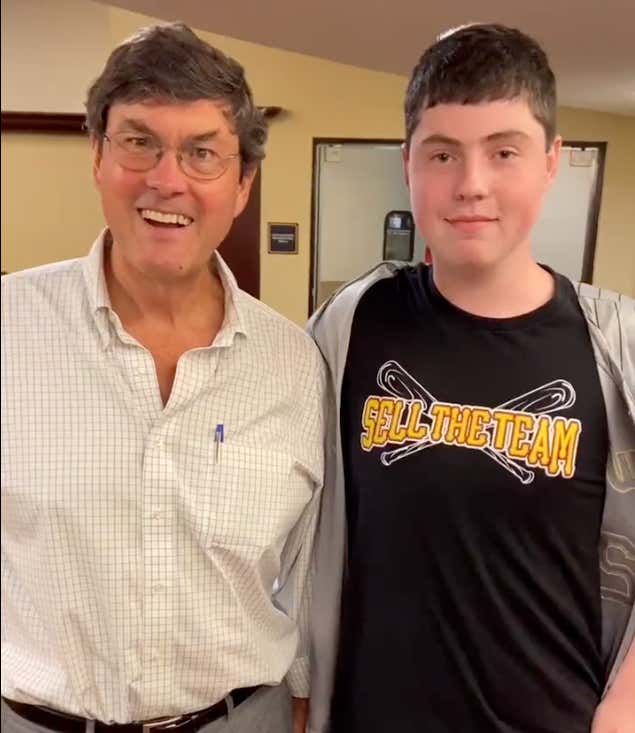 Don't get me wrong, this will do absolutely NOTHING for the chances of the Pittsburgh Pirates getting rid of an owner that continues to buttfuck the Buccos into irrelevance almost every single season. Sure there will be an occasional year where some magic happens that causes the Pirates to rise out of last place in the NL Central or maybe, just maybe get a wild card.

But other than that, the Pirates are going to be sunk into the abyss of the National League while they watch players like :takes deep breath: Starling Marte, Josh Bell, Austin Meadows, Gerrit Cole, Tyler Glasnow, Joe Musgrove, Charlie Morton, and Clay Holmes shine for other teams as long as someone like Bottom-Line Bob (A++++++ name btw) is running the franchise into the depths of baseball while plundering all the treasure that comes with it (A++++ pirate lingo use by me btw)

Which is why I love that this fan at least got to get a picture of Bob's smug face next to a Sell The Team shirt. It won't change a thing on the org chart just like our Fire Wilpon shirts didn't get the Wilpons to sell the team, no matter how incredible they were. 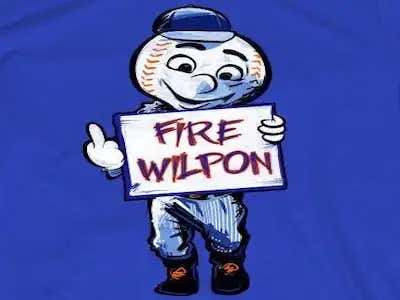 But this can be another rallying cry to a beaten down fanbase to fight back against some rich dude making you eat his shit and smile. Don't spend your money on the billboards, the airplane signs, and all the other bullshit fans do that NEVER work to get an owner out along with tickets to games. Instead buy a shirt, raise hell on the internet, and hope that your owner finally has to sell the team due to bad investments along with an incompetent son that turns the people within the ownership group against him, which leads to one of the richest men in the country that is super competitive to buy the team that he just so happens to be a fan of.

Okay, I can't guarantee you the super rich billionaire part. But I can guarantee that once you get a new owner, life is so much better. So again, wear your shirts, stop paying money to support a franchise that is acting like a Minor League organization for the other 29 teams in baseball, and if necessary hit them where it really hurts.

Someone BETTER shit in that Tundra before the season is over. And someone better give this kid season tickets for life for getting Bottom-Line Bob to look like a goddamn asshole when a new owner arrives to save the Pirates from this goddamn mamaluke.

P.S. I hate admitting this as someone that was held hostage by a bad baseball owner, but Bottom-Line Bob actually seemed like a good sport taking this picture (unless he didn't know what the shirt said because he was squirming like a worm that entire time).

P.P.S. I randomly started singing the Lonely Island banger "Captain Jack Sparrow" in my head halfway through writing this blog. So if I have to have the sweet stylings of Michael Bolton in my head for the rest of the day, so do you.

This song, and so many Lonely Island songs are soooooooo good as well as a reminder of the last time SNL was pumping out elite content