Welcome back to Blog Wheel. Sorry if it is a bit late. I got the keys to my apartment on Monday and I spent the whole day editing an air mattress hype video.

Nobody received a worst idea block this week. Jaden managed to slip through the cracks. To be perfectly honest, I forgot that I was supposed to be blocking someone. It completely slipped my mind until I started writing this. Jaden's response wasn't that bad anyways.

I love New York, but it is a very hateable city. There's tons of terrible things about it. Once a day I pass someone on the street who I think might assault me. It also smells bad, it's expensive, and sometimes the trains are delayed.

My favorite idea this week was "Pros and cons of nuking South Dakota." Pros and cons blogs are my favorite to write, and I think there's a lot of really good arguments on both sides of this debate.

Here is the spin

I need to confess something about this spin. I spun the wheel twice. The first time I spun, it landed on Rough n' Rowdy, but I really didn't want to write this blog. It seemed like something that could get me in trouble, and I was afraid that I would say something I shouldn't.  So, I spun the wheel a second time. It landed on Rough n' Rowdy again. I can't argue with that. If it's meant to be, it's meant to be. Plus, now I can be a company man and promote Rough n' Rowdy. If I say anything that bad I'll just pass it off as fight promotion.

Barstool employees I would beat in Rough n' Rowdy

Alex will be fighting in Barstool Sports Rough n' Rowdy this month on August 18th. She has been training her ass off lately. Going to the boxing gym every morning before work is a serious commitment. She definitely knows more about boxing and strategy than I know, or ever will know. Most people think of boxing as a physical sport, but it is at least 50% mental. More physically fit men lose to less physically fit men in professional boxing all the time. It happens because they don't have good strategy. The problem that Alex would run into against me is that she is a woman. Despite everything she has learned about boxing in the past month, I would still beat her handily. Her arms are more weak than my brain is dumb. I've put together a graphic titled "Mental/Physical Boxing Chart Who Would Win in Boxing Based on Total Points" to help illustrate this. Most total boxing points = winner of the fight. You can use this chart to determine the winner of any boxing match. 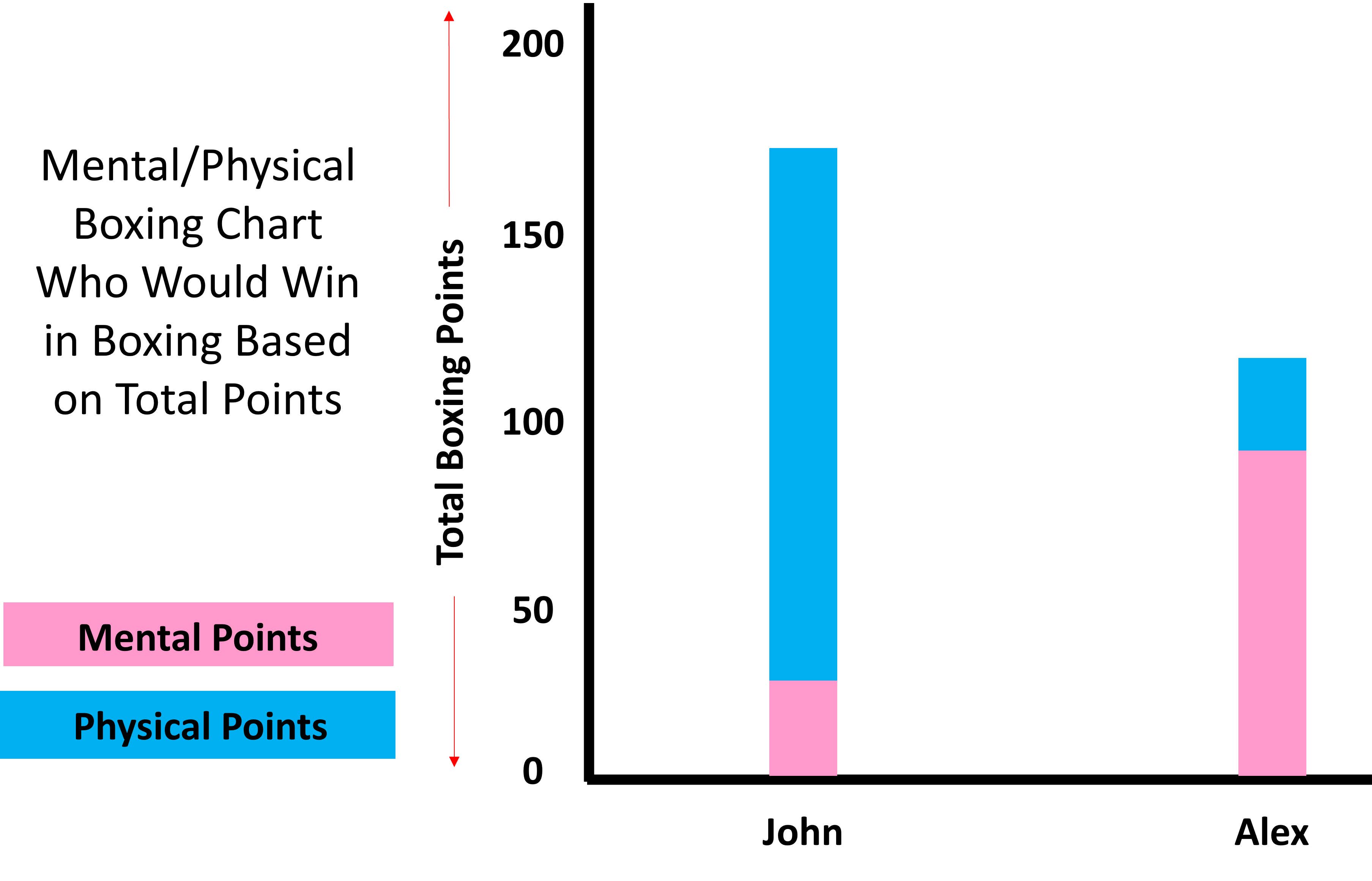 Fortunately for Alex, she will not be fighting me in Rough n' Rowdy. She will be fighting Ashley "Cupcake" Wiles. 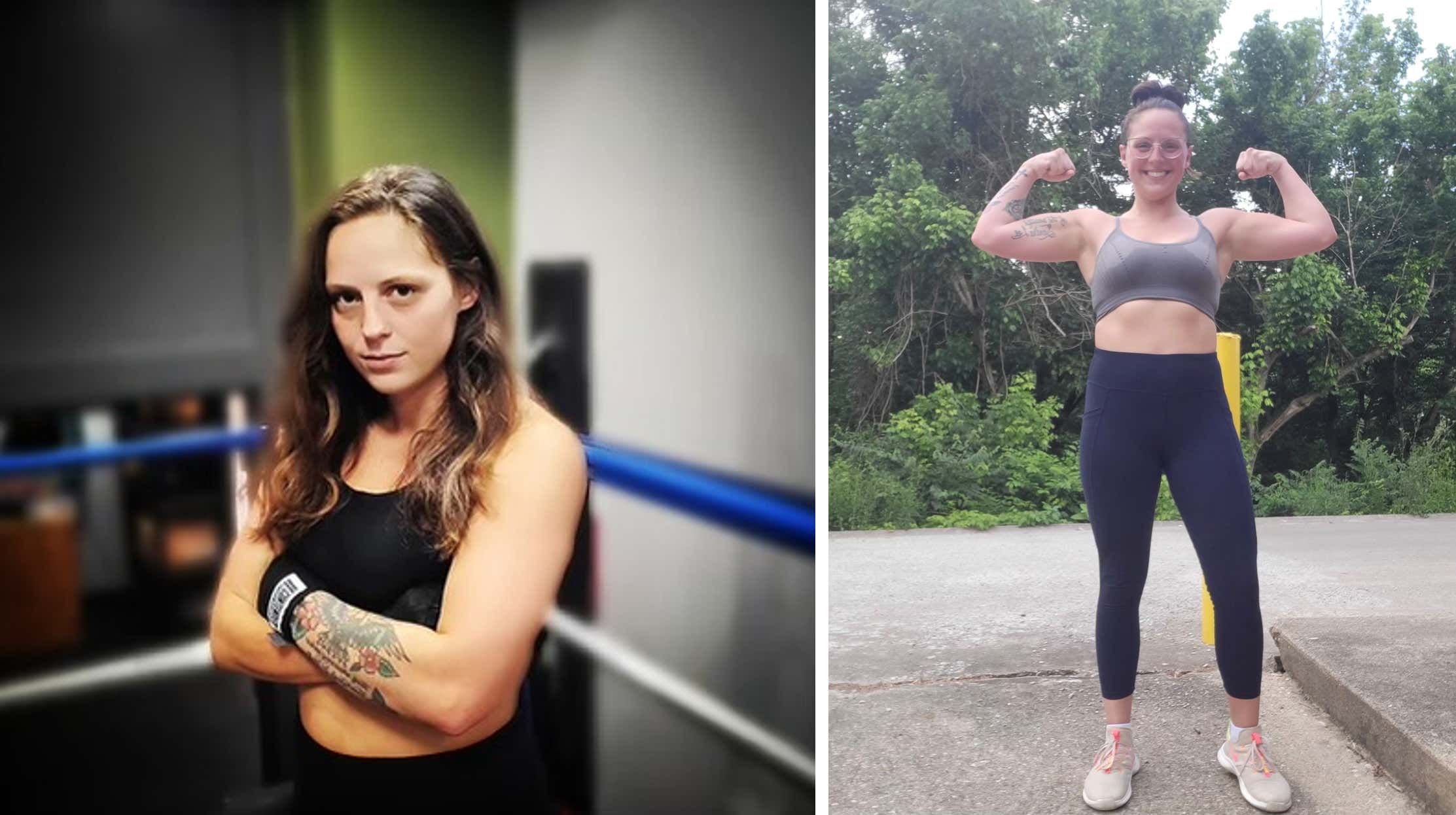 I know nothing about Ashley "Cupcake" Wiles other than she is from West Virginia, and she will be fighting Alex Bennett. Alex will be beating the shit out of Ashley with her fists on August 18th. If I would beat Alex in a fight, then by the transitive property, I would beat Ashley in a fight as well. The forearm tattoo does not scare me. She could have double the amount of forearm tattoos and I would still beat her.

Coach Duggs will also be fighting in the upcoming Rough n' Rowdy. Much like Alex, Coach Duggs has been training his ass off. I know because I sit next to him, and he often comes into work sweaty. I have never once caught a bad smell coming from him, which is quite remarkable. He knows more about boxing than me as well, but here again we face the same situation as we did with Alex (minus the woman part). I would physically be able to wear Duggs out in the ring. He could not keep up with my lightning quick footwork (comparatively). I would dance around and throw quick jabs at him for the first 2 rounds to tire him out, then I'd finish him off in the 3rd. They're going to call him Couch Duggs when I'm done with him because that's where he will be recovering after the fight.

Luckily for him, he is not fighting me either. Both Alex and Duggs dodged a bullet. Duggs will be fighting a Canadian named Steve "Primetime" Young.

Steve "Primetime" Young is a stupid name. My co-worker Deion Sanders is the one and only Primetime. Apparently, just being named Steve Young isn't enough stolen 49ers valor for this guy. I would use the same strategy as I used against Coach Duggs to defeat Steve "Primetime" Young. Tire him out early, then finish him in the 3rd. 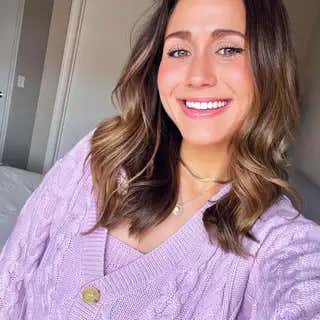 Jordan is another employee at Barstool Sports who I would beat in Rough n' Rowdy. She works closely with Alex Bennett, and is also a woman. Much like Alex Bennett, she has weaker arms than me. Feel free to consult my previous chart. It would look about the same, except Jordan's mental points would be even lower because she hasn't spent the last month training and learning how to box.

In case the chart did not illustrate things clearly enough, I have put together an equation that should help you understand.

This equation is a more sound way of determining the outcome of a boxing match than the points chart is. In some cases, women may be just as physically fit, if not more physically fit than men. However, I Googled, Do women have slower reaction times than men?, and I found a website that said "yes". This equation takes the woman factor into account. 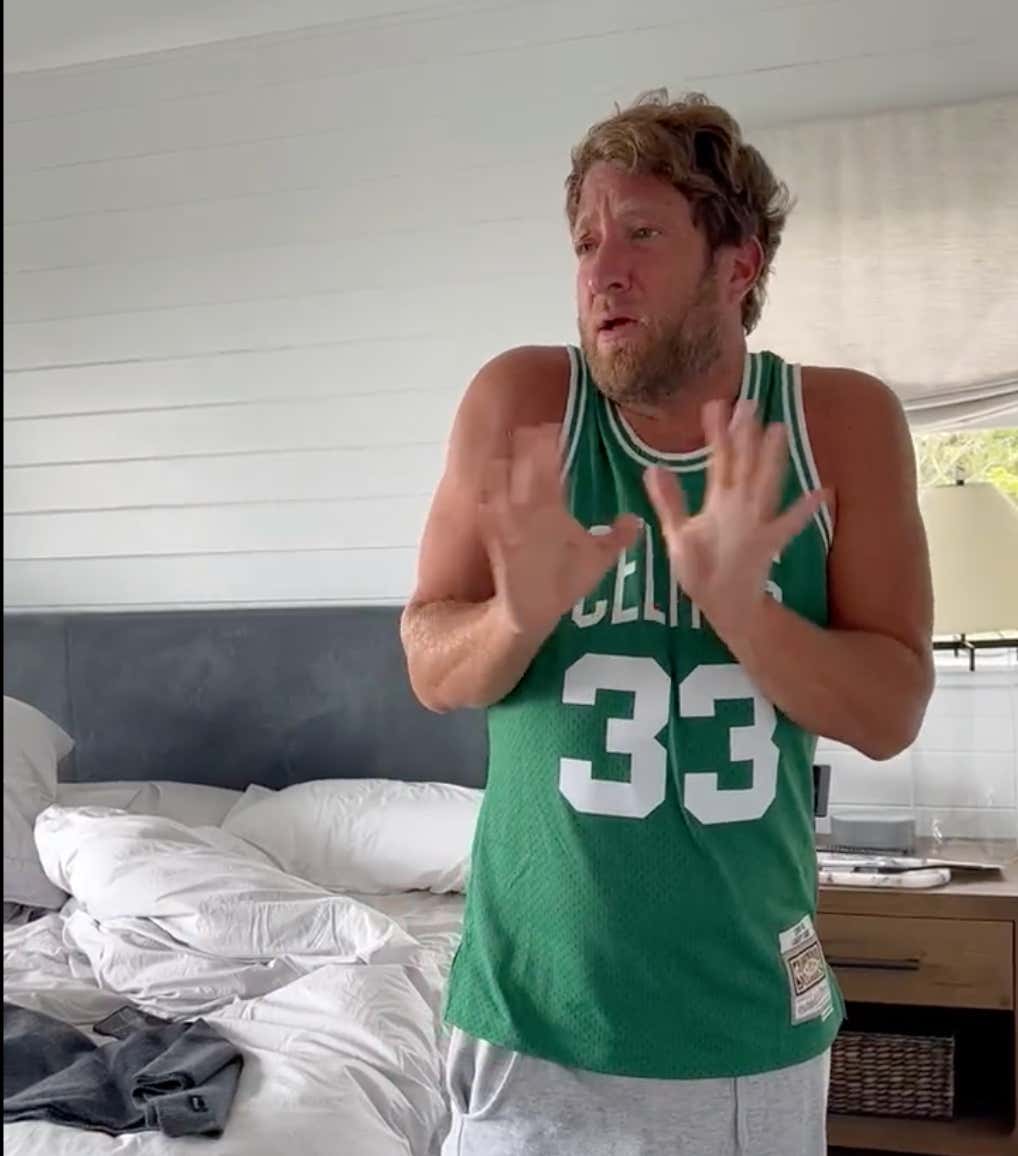 You might read this and think, "Wow John that is very bold of you to put your boss Dave on this list", but I don't think it is. I don't think I am saying anything that Dave hasn't gone on the record saying himself - he has bad shoulders. Maybe the worst shoulders. He might not even have shoulders. It has been a problem of his for years. I am pretty sure he is about to have major surgery. If you want me to make a chart or equation to demonstrate how having no shoulders is not good for boxing, I would be happy to do so, but I really don't think it's necessary.

Erika is the most important woman at this company. Barstool has been a rocket ship to the moon like you read about ever since she took over as CEO in 2016. If she squared off against me in a boxing match, I would win. 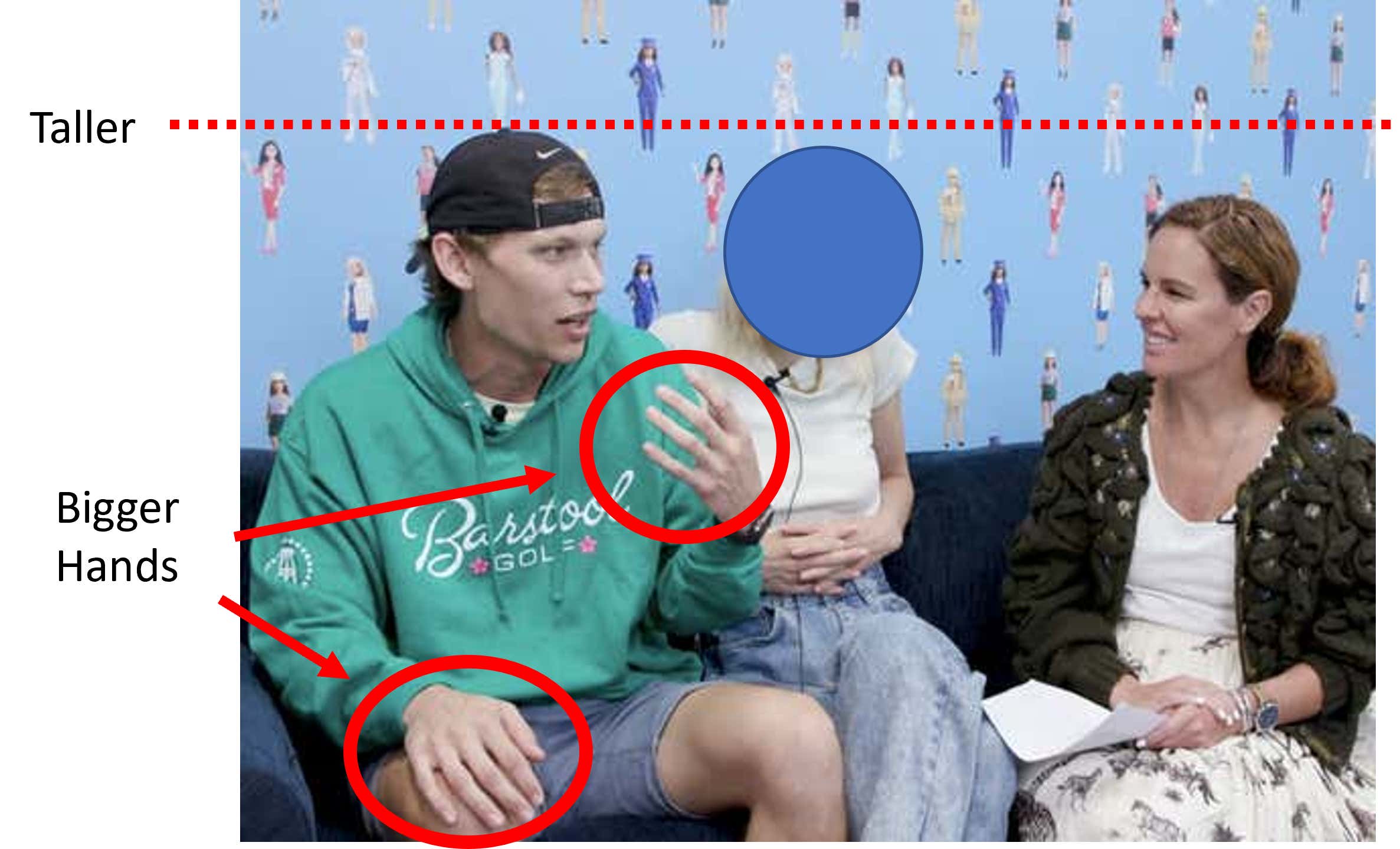 He does not work here because he lost to me in Barstool Idol. If he were to fight me in Rough n' Rowdy, he would lose again. The reason I included him on this is because soon after I officially got hired, he sent me this tweet.

I thought it was pretty funny. He's a bit of a crazy person. When I saw the tweet, I thought about replying with this. 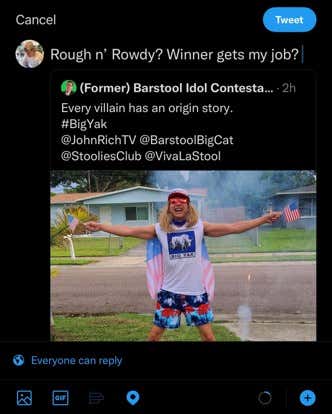 In the end, I was a huge pussy and didn't tweet it. I'm not sure why I was scared to. I watched him play basketball, and there is no way he would beat me in a fight. He is uncoordinated and not athletic. He also had an accident at Comic-Con that resulted in him getting severe brain damage. That story seemed like a lie, but after working with him for a day, he did seem to be missing a piece of his brain. Since I didn't offer to fight him at the time, I'll make him the offer now.

Ali, if you want to fight me in Rough n' Rowdy for my job, I'll do it. I'm pretty sure that would never be allowed to happen (because of his brain damage), but the offer is on the table. 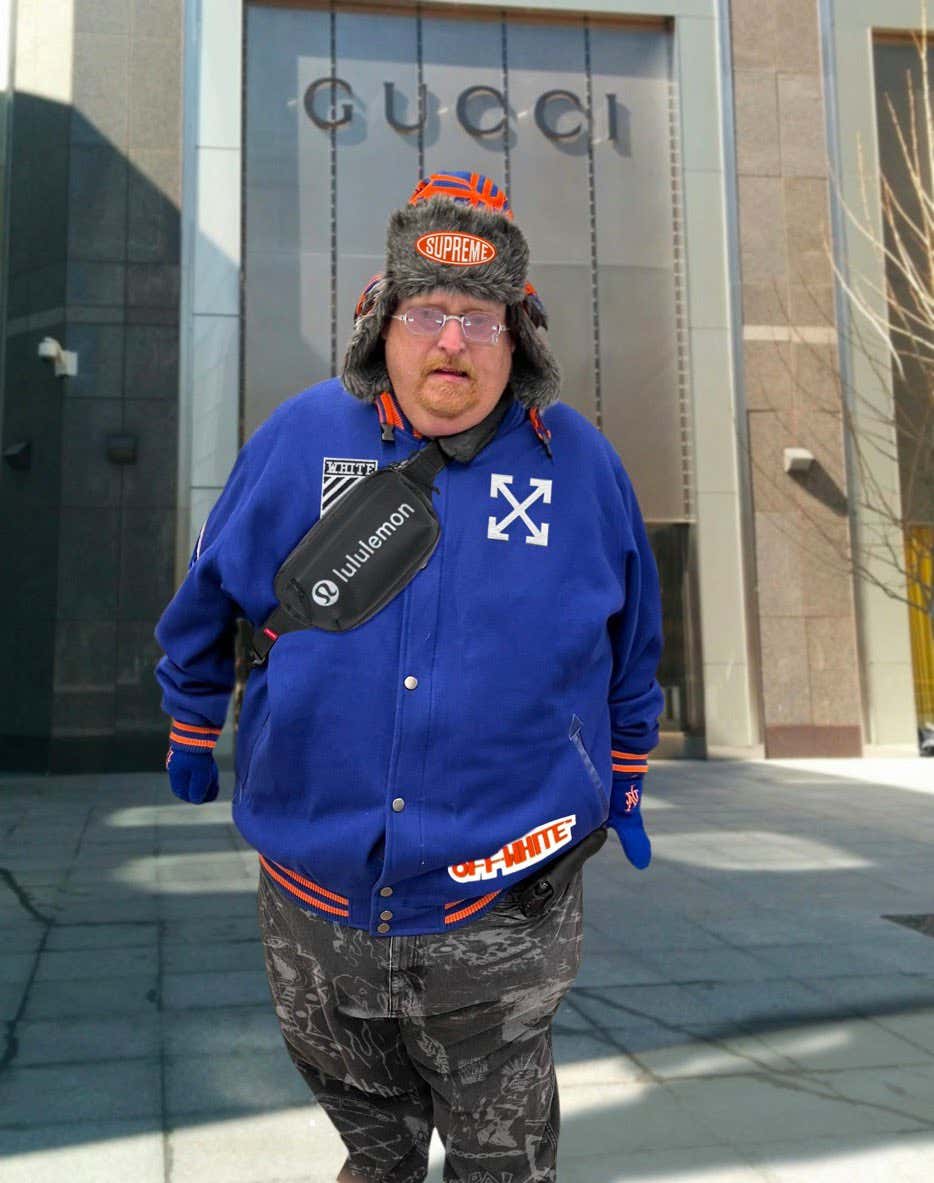 This would be an easy victory for me, but I don't think I could knock Frank out. He seems like a guy who could eat 100 punches without being phased. He would just be annoyed by the inconvenience of me punching him while he's trying to yell at me about the Mets. I would win by decision, but Frank would take on zero damage.

She just walked by my desk and I could definitely take her. 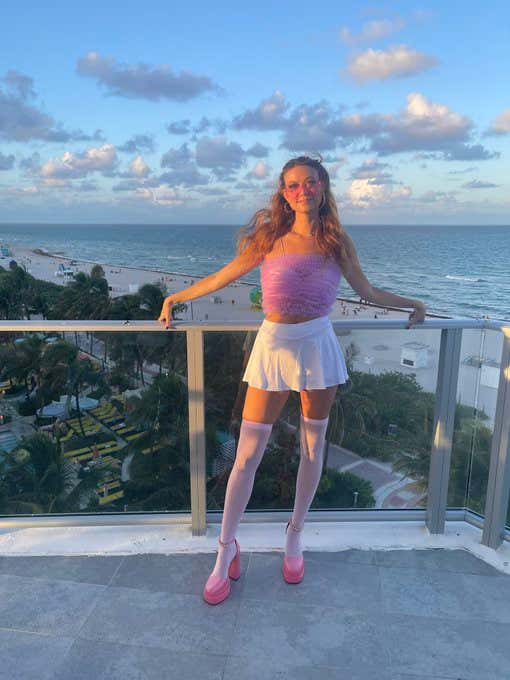 Caroline is another tall woman at Barstool Sports who I would beat in a fight. 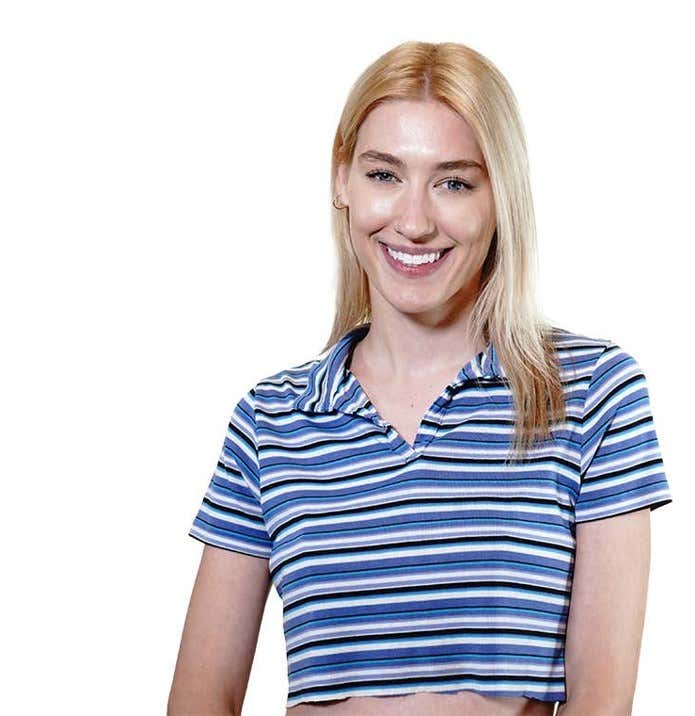 Another tall woman, another easy victory for John Rich. The question is becoming, "How many woman can I beat in a single Rough n' Rowdy?" Imagine a Royal Rumble style event where they just keep sending in woman after woman until one eventually beats me. This is actually a fantastic idea and they should incorporate it into Rough n' Rowdy immediately. It wouldn't necessarily have to be women either. It could also be little people, or maybe a mixture of both. Except I do NOT want to square up with Zah in the ring, so maybe I'll just stick to women.

There are certainly other women at Barstool Sports who I could defeat in Rough n' Rowdy, but I can only write about fighting women so much. I would also beat Chris Klemmer, Spider, Glenny Balls, and All Business Pete.

Make sure to tune into Rough n' Rowdy on Friday, August 18th to support Alex Bennett and Coach Duggs in their fights. It would mean so much to them and will make them so happy.

Here is some other promotion. Rough n' Rowdy is always awesome. Dave & Big Cat are on the call, there's multiple drawf fights,. you don't want to miss out. etc. etc. 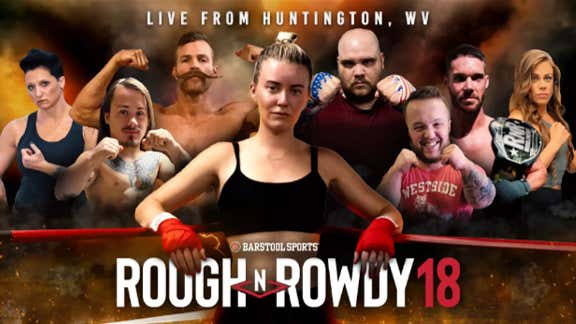 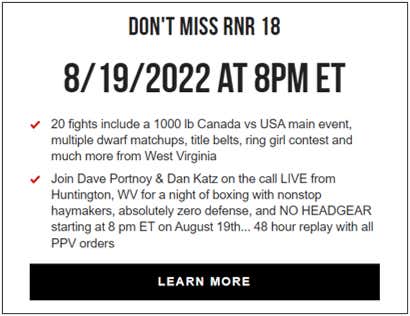