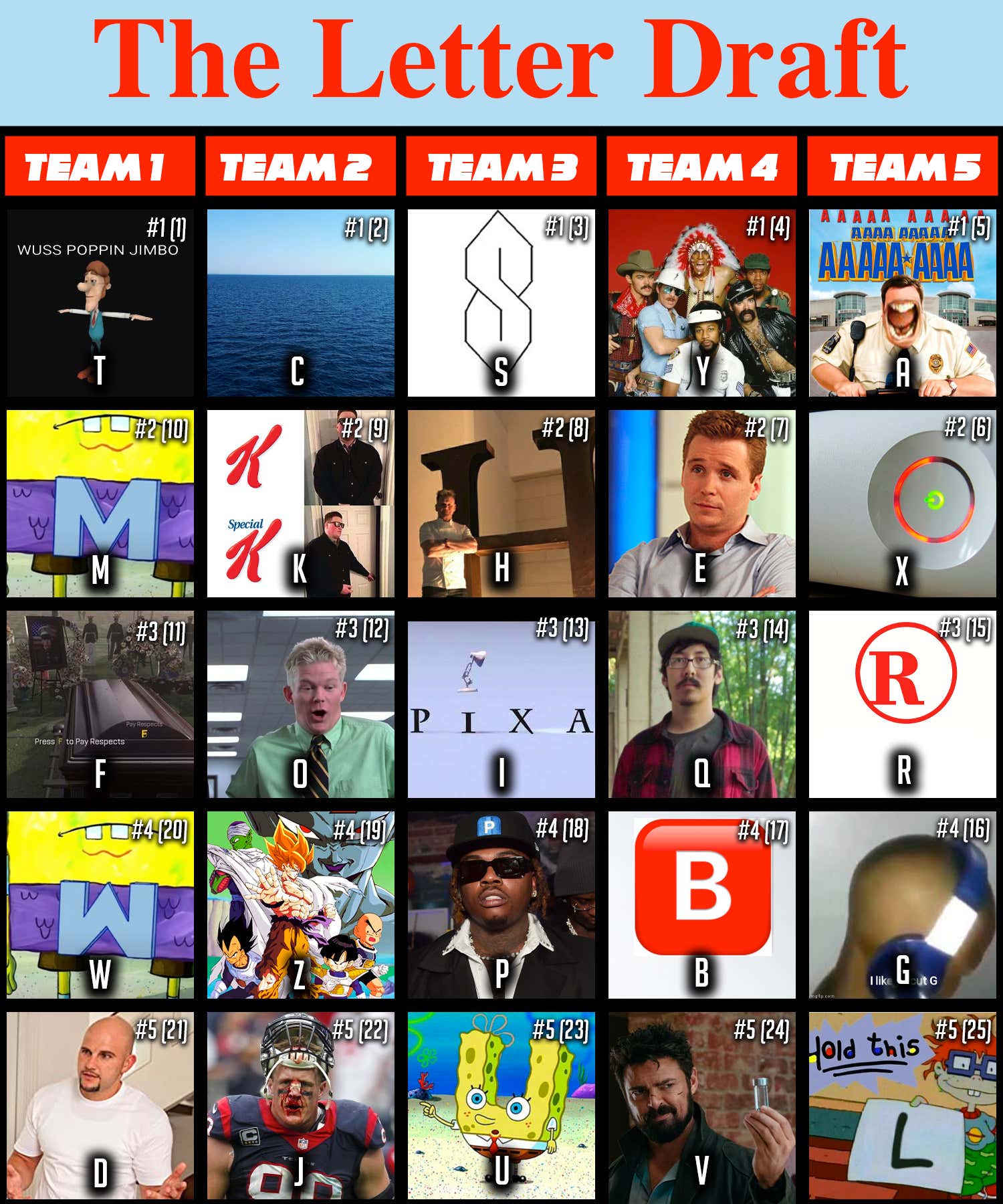 On this week's Dog Walk, we said goodbye to our friend, Coley Mick. In doing so, he requested to draft 25/26 letters in the alphabet. It turned into quite a fun show. No rules here, just pick a letter, any letter and argue the case. Here are the grades:

T is a reliable, strong 1.1. A capital T in cursive fucks…big time. This Drafter's picks looked like a pill box until round 5, so slightly confusing on that front. Lots of symmetry with 60% of this draft class being able to be folded in half. I'm not a fan of the F in Round 3 purely due to Draft Grades. If you pick an F, you're asking for one! W is a very strong value in Round 4 and in my opinion offered late 1st value. D is alright in the 5th, the fact that it can stand for dick is kinda sweet.

As a guy whose last name starts with a C I'm not a fan of this as a 1st rounder. As I recently learned, a C is not circular. It's a semi-circle. The fact that it was chosen before O is wildly confusing to me. I'm not going to argue with K which can stand for strikeouts and be special. Z isn't great value in the 4th, but I like how zzz was tied to snoozing. J in the last round is great value because it can stand for a jumper.

This Drafter admitting he's never learned cursive makes some sense based on this Draft. However, he did argue the heck out of that S and makes me think it's a 1.1 value at 3rd overall. But it's hard to not see this draft and think it's a promo code for free shipping. As a guy that has two Hs in his last name, I don't love it in Round 2. But I makes up for it as a steal in Round 3. PU are tough letters to end on, but it does not describe this drafter's performance.

This combination of letters has never been next to each other. Ever. Not on a license plate. Not on an eye test chart. Not on an encrypted password. Never. Simply amazing. Y in round 1 I'm not a fan of, but E in Round 2 is good value. Q is a WILD pick in Round 3 and could have gone undrafted. I'm glad this was called out in real time by the other drafters. The fact he didn't get a U was classic. B I don't mind as it's a rounder version of E. V in the last round is good value as it represents female's privates which are great things, no matter what Glenny tries to tell you. Someone had to be left off the poll and this was the obvious choice.

A is a strong 1st rounder at 5th overall. That's what you strive to get both in Draft grades and in any classroom really. X has a lot of sexual energy and R is the best type of movie rating. This Drafter pointing out that G is what you want to be is a strong case. L is Mr. Irrelevant and I am cool with it being above N.

Who do you think won this draft? Vote here: