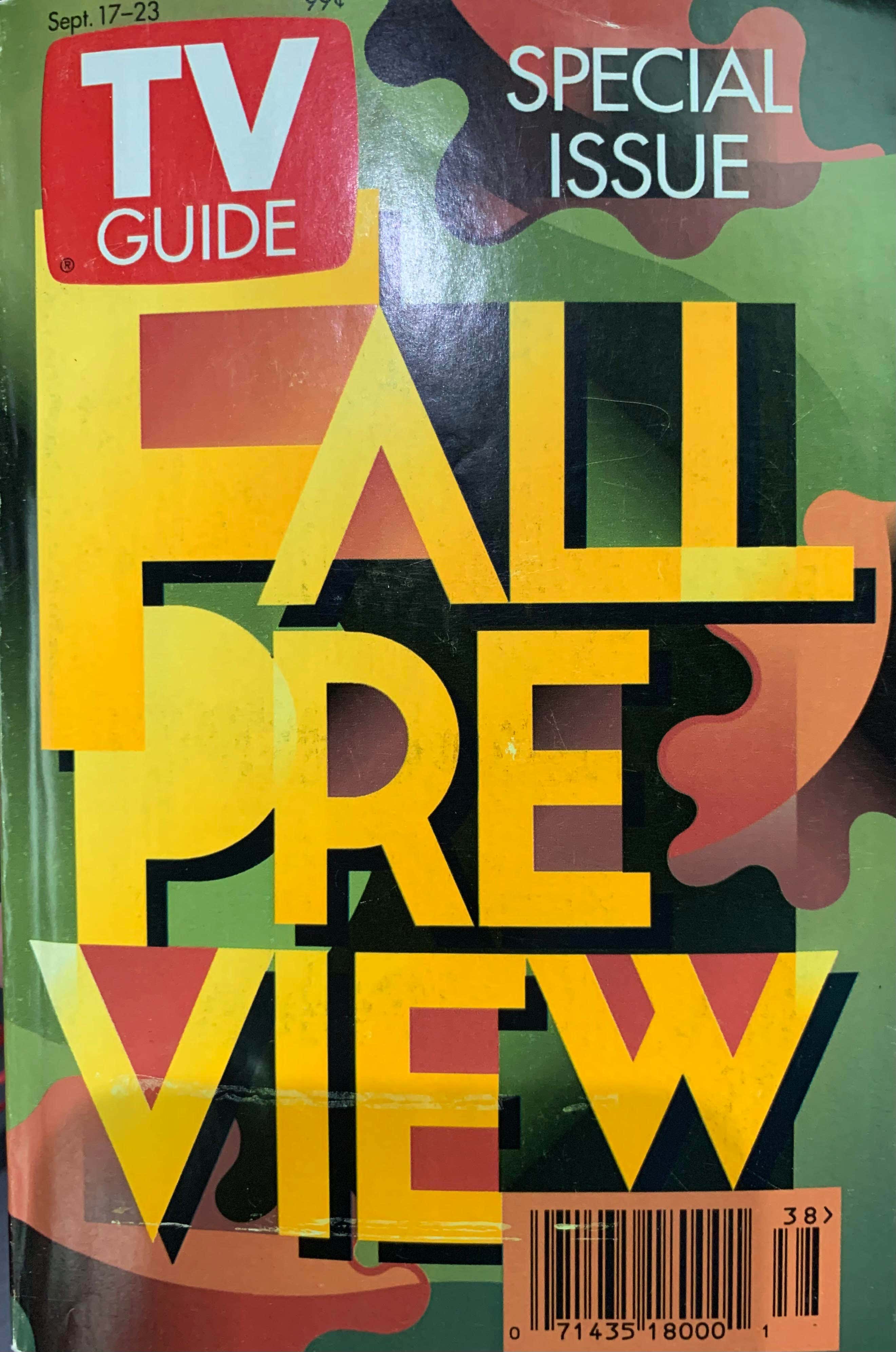 In the 80's and 90's, the TV Guide was one of the most popular magazines in the country. It was a very valuable resource and a much better option than the Prevue Channel that would only show you the next 90 minutes of shows. It would move so slowly between channels because it only showed three stations at a time. It was a very frustrating process.

Back then, people would plan their weeks by the TV Guide. You could check and see if Cheers or Seinfeld was a repeat that week and if it was, maybe you would go out on Thursday night. You never wanted to miss a new episode because you didn't have DVR to bail you out. For people who loved planning, there was no eagerly awaited issue than the Fall Preview issue. It would have a profile of each new show as well as a full schedule for each day. TV Guide would put a ton of work into these and would even have predictions of how each show would do.

I thought it would be fun to go get an old Fall Preview issue and spend some time this week to see if TV Guide got it right about the shows from 1994 that would become hits but also to go over some of the shows that tanked.

People were really excited about ER before it came out and TV Guide was no exception. However, the magazine seemed to also like another new Illinois-based medical show called Chicago Hope that was on CBS and also on Thursday nights at 10. Chicago Hope went into the season with a bit more acclaim as it was led by David E. Kelley who already created Doogie Howser, M.D. and Picket Fences (and eventually The Practice and Ally McBeal). It was thought Chicago Hope had the better cast as well with actors you'd usually see in movies like Mandy Patinkin (The Princess Bride) and Hector Elizondo (Pretty Woman).

But ER had a couple things going for it that Chicago Hope didn't. They were on NBC's Thursday night lineup which was the most powerful lineup in TV at that time and it featured Mad About You at 8 PM and Seinfeld at 9. ER also had George Clooney.

ER would last for 15 seasons and would solidify that Thursday night at 10 spot for it's entire run. It won the Emmy for Best Drama in the second season and was the most watched show on television in three different years. It's probably the most successful drama of the decade.

By any other measure, Chicago Hope was a successful show. It ran for six seasons and won several Emmy awards. ER beat the shit out of it that first season but credit to CBS for moving it to Monday nights in the second season where it eventually would become a Top 20 show.

What TV Guide said about ER: An appealing cast graces this absorbing drama…Not much to fault here…Both ER and Chicago Hope are fine, promising shows. If you watch one, you'll want to tape the other.

What TV Guide said about Chicago Hope: Looks like a winner. An involving, outstanding show…Strong, well-written series with a top notch cast.

Madman Of The People (NBC)

Cheers went off the air in May of 1993 and while Seinfeld had stepped up that next season and took over as a huge hit, NBC still wanted another big sitcom for Thursday nights. They had Mad About You and while that was a steady performer, that was more in the Wings camp than the Cheers one. NBC was looking bigger and had two new shows that would premiere on Thursday nights.

Mad About You would start the night off at 8 and give a lead-in to a new show called Friends. Friends would obviously become a monster and would run for 10 seasons but it was not very well received by critics initially and TV Guide was no exception. They called the cast "an attractive bunch" but said Matt LeBlanc's Joey was a "Tony Danza clone". They seemed annoyed that this was another sitcom geared to Generation X. If they only knew that the next generation might like the show even more than Gen X ever did.

Seinfeld would follow at 9 PM and then NBC scheduled the comedy they believed in more than Friends at 9:30 in Madman of the People starring Dabney Coleman. Coleman had a lot of success in 1980's movies like Tootsie, 9 To 5 and On Golden Pond. But every time he starred in a TV show, it didn't make it a second season. Madman of the People would be no exception. The idea of the show was that Coleman would play a grumpy magazine columnist working for his Gen X daughter who is somehow the publisher of the magazine.

Madman of the People is known to TV historians because it's one of the highest rated shows to ever get cancelled. So why was it axed after only 16 episodes? The ratings were good but it was losing a large percentage of the huge numbers Seinfeld was pulling in the half hour before. To make matters worse, ER was right after it and was pulling in big numbers too. It seemed that many people were changing the channel after Seinfeld just to avoid Madman to only turn it back to NBC to watch ER.

NBC would never get that hit to follow Seinfeld but it wasn't due to a lack of trying. Caroline in the City, Suddenly Susan and Veronica's Closet each got a chance in the next three years. None of them would become big hits but at least they lasted multiple seasons. The same can't be said for Madman of the People.

What TV Guide said about Friends: Do we need another pack-of-pals show? And while trying to appeal to Xers, the show doesn't exactly flatter them by portraying young adults as sex-starved losers…Whether it deserves it or not, this sitcom couldn't ask for a better slot on NBC's schedule.

What TV Guide said about Madman of the People: One of the few new shows that's getting good buzz…The time slot is getting the best buzz of all…Some advertisers think Madman could be the season's only guaranteed hit.

Later this week, I'll go over some other shows from this year. This was was an especially stacked season for new shows.