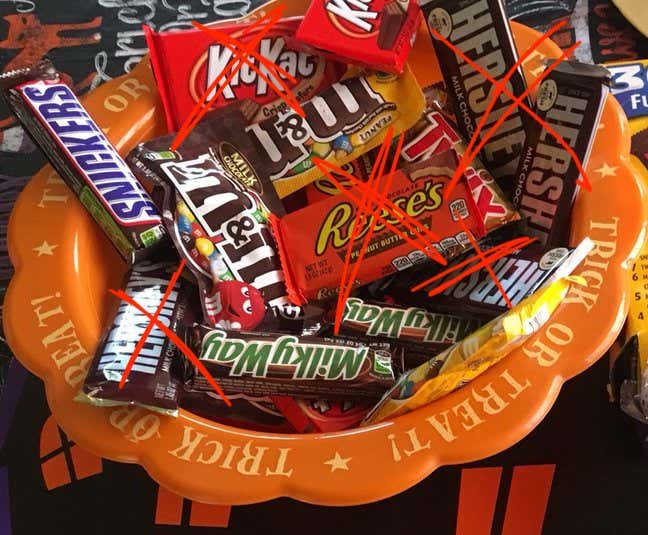 CNN- Bad news for Halloween enthusiasts. This year, you might be out of luck in the candy aisle. "We will not be able to fully meet consumer demand," for the October holiday, warned Hershey CEO Michele Buck in prepared remarks about the company's second-quarter results Thursday.

The problem? Consumers are demanding more regular and Halloween-themed candy than Hershey can make, at least right now.

Many consumer goods manufacturers have been struggling to meet surging demand for their products during the pandemic, especially with the ongoing supply chain issues. That's meant that they've had to reduce production of certain less popular items or, as in the case of the late, great Choco Taco, cut them altogether. Hershey is in the same boat.

Nope. Uh uh. FUCK THIS. I can live with the gas prices being sky high and inflation doing whatever inflation is doing to my already poor standard of living. But I'm not allowing Hershey's to fuck up Halloween because of some supply issues.

I am taking a stand for the kids that are trick or treating in 2022 after they spent the last two years with everything being all fucked up. Those poor children were stuck at home """learning""" behind a computer screen as their stressed out parents tried to run out the clock on God knows how many days, live in a world where everyone's always bitching at each other online, and will be forced to grow up in a Choco Tacoless world. They shouldn't have Hershey's candy robbed their life on the biggest kid's holiday of the year this side of Christmas. I may not be a rich man or even an upper middle class man. But I still spend the money I have to make sure the people in my community are happy.

Don't give me that nonsense about there being plenty of other candy outside of Hershey's either. The Reese's Peanut Butter Cup has been the GOAT Halloween candy since my old as was a kid and can still fetch any candy it wants in a trade. It was MJ in 1992, Shaq in 2002, LeBron in 2012, and Giannis in 2022, with the Kit Kat being its elite wingman (Pippen, Kobe, Wade, and Giannis' left arm because I'm not comparing Khris Middleton to a Kit Kat, no matter how much the Bucks missed him in the playoffs this year).

Which is why I am politely asking Hershey's to redirect their supply to making sure there are PLENTY of Reese's and Kit Kats to go around. Trust me, nobody is going to be upset if they can't get a Skor, 5th Avenue, or Caramello bar during prime Halloween candy season. Redistribute all that chocolate along with whatever batches you use for Milk Duds, Mr. Goodbar, and those trashy Whoppers to make sure trick or treaters will be greeted by those familiar orange and red wrappers. Trust me, kids aren't going to give a fuck that they can't get a Hershey's Almond this year since that shit is basically health food on Halloween.

If that's not enough supply to meet the demand, M&M Mars needs to donate some chocolate, peanut butter, wafers, and whatever else is necessary to produce these confectionary legends no matter how much it may hurt their Snickers or M&Ms production because #somethings are bigger than the almighty dollar and corporate greed.

Don't do it for me. Do it for the children. Trust me, I know what the people want and love, as evidenced by me winning not one but TWO different halloween candy drafts during my time at Barstool.

I may not have drafted either of Hershey's Big 2 in the Dog Walk, but that's only because they went with the first two picks. So do the right thing Hershey's and make sure this Halloween is not ruined. Also make sure that you have enough chocolate, little paper slips, and thin foil to produce the usual amount of Hershey Kisses for Christmas because this commercial is the official beginning of Christmas season for me.

Yes I used the old version instead of the new HD version since Hershey's kept wheeling out that comically dated commercial for years, which just felt right because it brought me right back to my childhood.

Anyway, do the right thing Hershey's or risk being put on my enemy list like Klondike, who I am currently dog walking (not the Barstool Chicago version) on Twitter.

P.S. KFC and I recorded two Snackin' Offs last time I was at HQ that just have to be edited. So shout out to the small but vocal group that demanded their favorite junk food cult classic show come back.