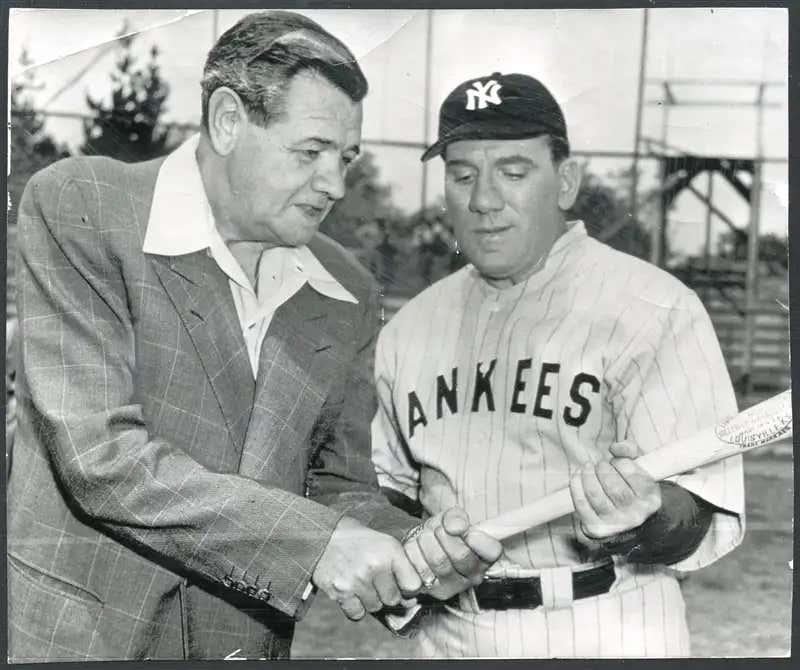 Babe Ruth makes his final public appearance as he attends the premiere for “The Babe Ruth Story,” a biopic about the legendary baseball star’s life. The movie starring William Bendix in the title role is critically panned. Bendix, who bore no resemblance to Ruth, gives an over-the-top performance, as the Bambino is portrayed as dimwitted while unknowingly healing sick and disabled children.

When Lou Gehrig and Babe Ruth played together on the New York Yankees, the two had an often uneasy personal relationship. Ruth was the larger-than-life star of the team, while Gehrig, more quitter and humble preferred life away from the spotlight. It was not until one stood back and looked at what Lou Gehrig did that he gained a genuine appreciation, while Ruth was the most prominent sports star in the world in the 1920s, beginning a new era of sports idolatry.

When Lou Gehrig’s life took a tragic turn with the diagnosis of ALS, a movie was made titled “Pride of the Yankees” starring Gary Cooper. The film, released in 1942, one year after Gehrig’s death, was the perfect way to tell the humble Gehrig’s life and is widely regarded as one of the best baseball movies of the time. The movie received ten Academy Award nominations, including Best Picture and Best Actor for Cooper in his portrayal of Gehrig.

Where “Pride of the Yankees” is a first-ballot Hall of Famer, “The Babe Ruth Story” is a hackneyed no-name struggling to make it in an independent minor league. William Bendix, who played Ruth, had once been a Yankees batboy who was fired for fulfilling a large order of hot dogs and soda for the Yankees slugger, which led to him missing a game with an upset stomach. However, when cast as the larger-than-life star, Bendix was too small and bore no resemblance to the baseball legend. Making matters worse, he was uncoordinated and lumbering when acting out the activities of playing baseball.

Babe Ruth was an American icon but had flaws. He often drank too much off the field and was known for this late-night carousing. This behavior led to the Boston Red Sox's decision to sell Ruth to New York. Instead of showing a complete picture of Ruth on and off the field, the film turns Ruth into a cartoon. Scenes include a sick boy in a wheelchair standing up and miraculously cured by the Babe saying hi to him. Later, Ruth leaves a game to save an injured dog and is suspended by Yankees manager Miller Huggins.

The movie would be universally panned and is still by some to be among the worst movies ever made. Many critics consider the Babe Ruth Story the worst baseball and sports movie ever made. Following its New York premiere, Babe Ruth returned to the hospital, where he would pass away two and a half weeks later on August 12th due to throat cancer at the age of 53.

There would be subsequent attempts to make a movie about Babe Ruth, but none have yet to hit the mark, as a 1992 flop starring John Goodman entitled “The Babe” was not much better.