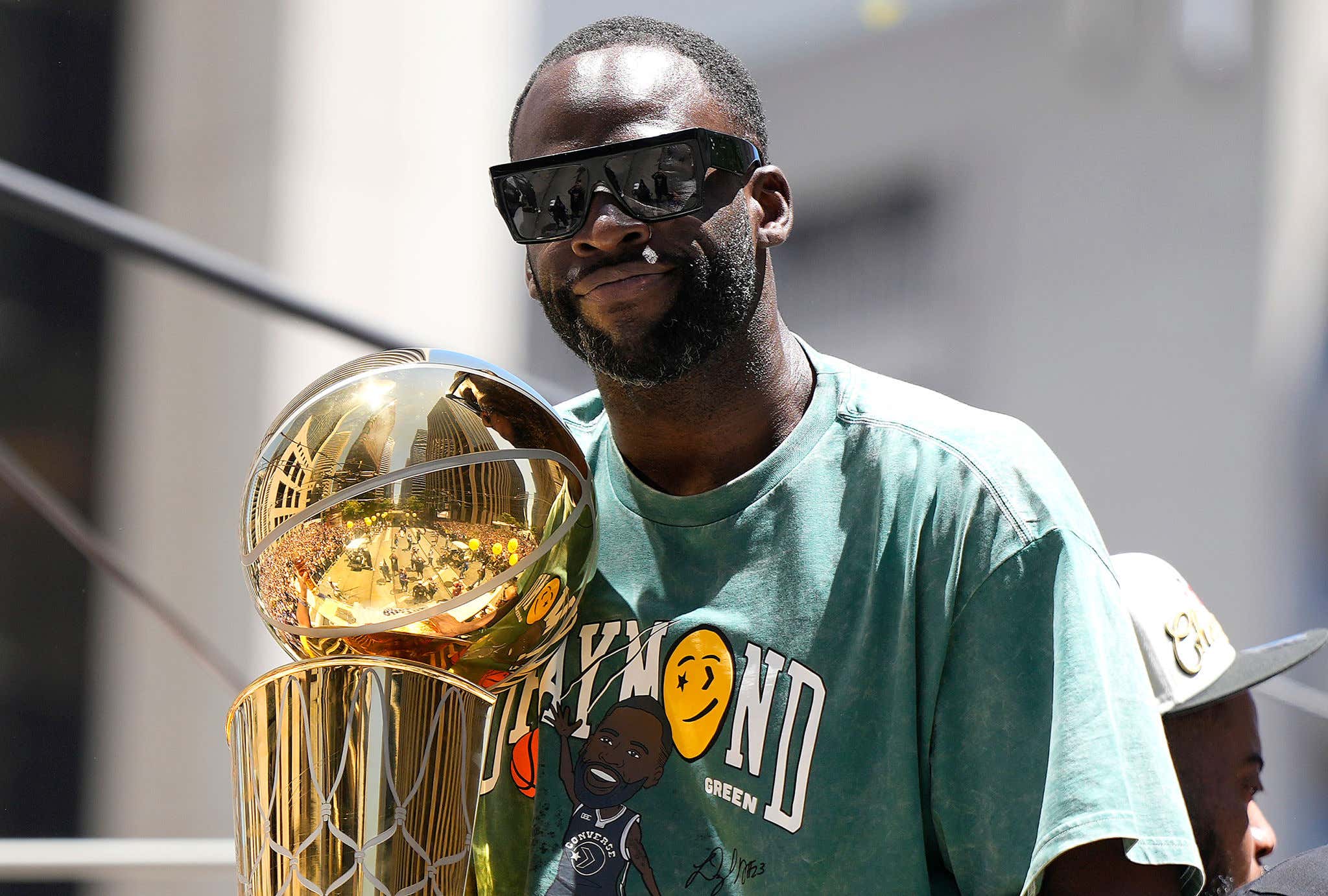 August 3rd is a pretty important date for the Golden State Warriors. For a team that has shown that continuity is pretty valuable and a core that just won their 4th championship, August 3rd is a day they have a decision to make in regards to an important member of that core. They need to decide what to do about Draymond Green, who would be eligible to sign a 4 year extension. What's the price he's looking for?

That would be a 4/140M price tag for a 32 year old Draymond. That would bring his contract to a total 5/168M. Here's what that max extension breakdown looks like

Even with the new TV deal money coming in, that's pretty outrageous and I don't care how important you think Draymond is to the Warriors success. It's not all that surprising that he's asking for the max, that's Step 1 in a negotiation like this, plus he has Klutch Sports on his side and in his ear. When have they been known to advise their clients to take a discount?

There's only one problem here. The Warriors are showing zero interest in offering this max extension

Based on the reporting from The Athletic

All indications, though, are that the Warriors have no plans to offer Green a maximum extension, and there isn’t any current traction on any type of extension. The typical pattern of this Golden State front office is to extend with one year remaining. Even Stephen Curry waited until one year remained before signing his max extension last offseason. Green has two years remaining on the maximum extension he signed in 2019. While he could opt out a year earlier, the Warriors’ current preference is to talk extension with Green next summer.

it doesn't sound like that's happening anytime soon. Here's why this has the potential to be a pretty significant issue. That same Athletic story goes on

Perhaps a bigger concern is how the NBA Finals MVP would feel about Green not getting an extension. Multiple sources said Curry would not be happy if the Warriors lost Green because the team didn’t want to pay him. Curry is under contract for four more years and has a desire for Green and Thompson to be with him for the length of his stay. A three-year extension would align Green’s contract with Curry’s.

Curry sees the Big Three as a package deal. While much of the talk of the season was about the Warriors’ plan to win-and-develop simultaneously, it isn’t lost on the veteran core how that plan disappeared in the postseason. It was all on them again, with the help of some critical vets.

Ruh roh. Not only would it be a pretty big loss basketball wise if Draymond were to leave GS, but you're then adding in an unhappy Steph to the mix? In 2022 when stars are demanding trades regardless of how many years are left on their deal? While I think there's a 0.00000000001% chance Steph ever does that, if the reports are he'll be pissed if the Warriors let Draymond walk over money, who knows?

The good news for the Warriors front office is I'm pretty sure they know the market will not pay Draymond a max even if he does want to test free agency. What they have to decide though is if there is no extension reached, do they get proactive and trade Draymond before he could walk? It's a situation we see NBA teams deal with all the time for players entering the last year or so of their current deals. Remember, they still have to pay Jordan Poole and Wiggins. Klay is 2 years away from free agency as well.

That's why this situation is so fascinating. For a team that talked a big game about paying whatever to win and not giving a shit about the tax, well when you do that the players are obviously going to ask for the most money possible. A precedent has sort of been set in GS, especially when you're talking about their core 3 guys.

It'd be one thing if that core had shown signs of regression or not being competitive, but seeing as how they just won the NBA title that isn't exactly the case. The question becomes how many more years are they going to be at this level? My guess is as long as Steph Curry is alive, the Warriors are going to be pretty good. Even if Draymond is a little older, it's not like his skillset doesn't age well. He already can't shoot for shit and that didn't stop him from having a legit impact in the NBA Finals. He's one of those classic cases where his value is greater to GS than any other team given how they play and the continuity he has with the other stars on the roster. Knowing that, I cannot see the Warriors letting him walk over money. I also can't see Draymond willingly leaving GS for another team that probably won't win the NBA title for less than max money, because no team is going to offer him a max.

So at the end of the day, you can't get what you don't ask for, but ultimately they probably settle on something that makes more sense for both sides. If not, who knows it could be the first legit domino that finally ends this Warriors Dynasty bullshit. Enough already of these guys.